On the receiving end of a leopard!

An abundance of greeneries that come to life with birdsong and calls of the wild, punctuated with rocky outcrops highlight the Kutumbigala Sanctuary as one of the most pristine locations in the Ampara District. Home to one of the ancient Buddhist monastic complexes built during the times of King Devanampiya Tissa, Kutumbigala comprise of ancient caves, inscriptions and ancient dagabas. But over time, the less populated jungles of the East have now become shared territory for humans as well as wildlife. Therefore, gradual changes in the ecosystems are posing fresh challenges to the traditions of coexistence. As a result, conservationists observe significant changes in the behavioral patterns of animals. The recent incidents of two consecutive leopard attacks on farmers bear testament to this fact.

The first incident was reported on December 30 where a farmer was killed by a leopard near the Helawa Paddy Field one km away from the Kutumbigala monastery. On January 1 another farmer was attacked by the leopard and was immediately rushed to the Pottuvil Hospital. He is currently being treated there. At the onset of the incident, the tensed villagers attacked the DWC office in Panama. Following the incident, Army and Special Task Force personnel were deployed to control the situation. Five people were arrested and produced at the Panama Magistrate’s Court and were released on bail yesterday.

It could be that their home ranges have changed or they are moving in search of ‘suitable habitats’ since there are forest lands and private lands in the area as well. Therefore, we may have to change the dimensions on ongoing leopard studies in Yala, Wilpattu and Kumana National Parks.”

“Paddy farmers are engaged in traditional cultivation practices and have to protect their crop from elephants and other wild beasts,” opined Ven. Pelwatte Buddhawansa Thera of the Kutumbigala Monastery. “But unfortunately one person was recently killed while at his pala (treehouse) and the other person was injured and is in hospital. At the onset of the incident the District Secretary, Army, Department of Wildlife Conservation (DWC) and other authorities got together to find a solution to the problem and subsequently the animal was moved to another location,” said Buddhawansa Thera.

When asked if similar incidents have occurred during recent times,  Buddhawansa Thera said that resident monks at the Thapowana have seen leopards roaming in the area. “There’s an element of coexistence, but this incident is different,” he said. 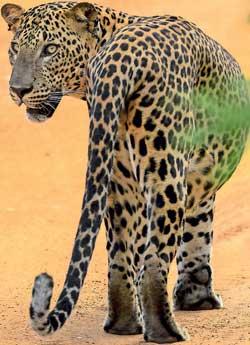 He further said that the authorities should look at providing compensation to the family of the deceased. 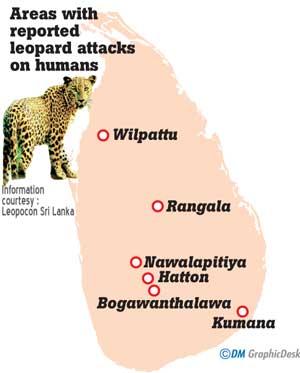 The DWC released the animal to a location between Kumana and Yala National Parks. “DWC officials are keeping a close watch on the animal and will be conducting daily patrols as well,” opined Ranjan Marasinghe, DWC’s Director (Operations). “The reasons for this incident could be manifold. It could be that their home ranges have changed or they are moving in search of ‘suitable habitats’ since there are forest lands and private lands in the area as well. Therefore, we may have to change the dimensions on ongoing leopard studies in Yala, Wilpattu and Kumana National Parks.” said Marasinghe.

Taking an example from Yala, he observes that territories of male leopards have overlapped. “Usually this doesn’t happen and if it does they would fight for their territory. But this is a new situation. Perhaps there’s an increase in their population,” he added.

When asked how people and leopards could be protected given that certain human activities are allowed within sanctuaries, Marasinghe said it is a challenge to provide 100% protection on leopards and/or the people. “The people have been farming in these areas since the 1980s, but there are changes in these traditional practices as well. If they are going to protect their crop from wild animals they need to stay awake. If they drink and pass out it won’t help them because they may get attacked by these animals. Besides it is a tough call to deploy an officer for every animal since our cadre is less than thousand. We have already deployed many of them to mitigate the human-elephant conflict. Therefore awareness programmes need to continue and it is best that people also take care of themselves,” said Marasinghe.

Some initial observations by Rukshan Jayewardene, a conservationist with over 20 years of experience studying leopard behaviour and founding trustee at the Leopard Trust, were that this animal seemed to be one that wasn’t afraid of humans. “It could be that it had tasted the flesh of humans or has identified the ease of killing humans. But this is a rare phenomenon for Sri Lanka. We cannot say that it is not in the nature of leopards to attack humans, but usually they don’t get into conflict with humans and live away from human settlements. Then again this is not because they fear humans, but because they are mistrustful of humans,” he added.

He explained that wherever there’s wilderness or suitable habitats, there’s prey. “If one claims that there were instances of dogs going missing it could be that the leopard has changed its behaviour. Leopards who are roaming around national parks and protected areas don’t prey on dogs and they would opt for dogs only if prey is less,” he added. 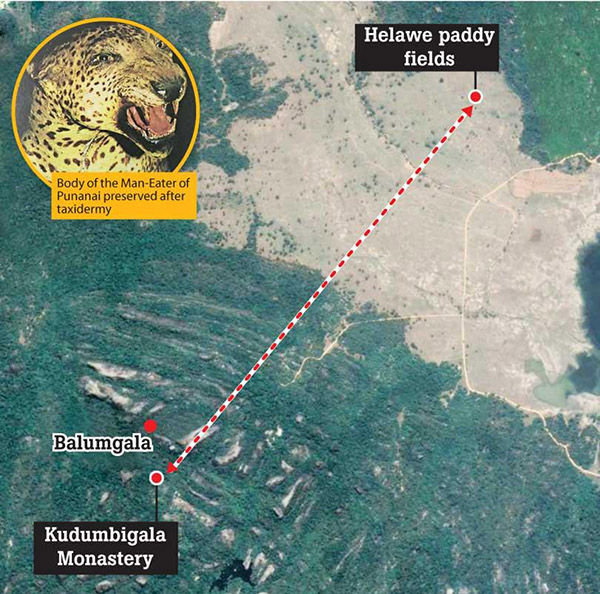 The DWC captured the leopard, who is supposedly the leopard in question and was released around 40km towards the interior of the Kumana National Park, away from any human settlements. But Dr. Jayawardene opined that there’s no possibility of translocating the animal unless it is held in captivity. “It is important that the DWC captures the correct leopard because otherwise another innocent leopard will be caught and the leopard that showed signs of predation will remain in the field. On the other hand people also have to be careful,”he warned.
He identified the lack of a proper post mortem on the incidents that have taken place as another issue at hand.
One of the problems encountered when declaring National Reserves and Sanctuaries is that it has covered land on which a community has traditionally engaged in some activity. Section 3 (3) of the Flora and Fauna Protection Ordinance states that a person who has acquired a right by law, custom or usage to carry out an activity in any land in a National Reserve or Sanctuary can carry out this as before even after the declaration. The most famous of these activities is hunting which was done by the Vedda communities followed by traditional farming. Fishing too is allowed.

At the onset of the incident the District Secretary, Army, Department of Wildlife Conservation (DWC) and other authorities got together to find a solution to the problem and subsequently the animal was moved to another location,”

But Jayewardene questions whether it is practical to allow human activities when declaring sanctuaries. “If not, what is the solution? It is therefore a balancing act. Both humans and leopards have a right to be there, but they have to sought out the ensuing conflict. In this country humans and leopards have coexisted with very little conflict. If you take a country like Zimbabwe there has been a great deal of human-leopard conflict and now since the number of leopards has decreased, the conflict too has reduced,” explained Jayewardena.

He also said that leopards are secretive animals and they learn throughout their lives. “The first thing they will learn in a human-dominated landscape is how to live with humans. So it looks like this leopard knows a lot more than humans that what humans know about him,” he opined. 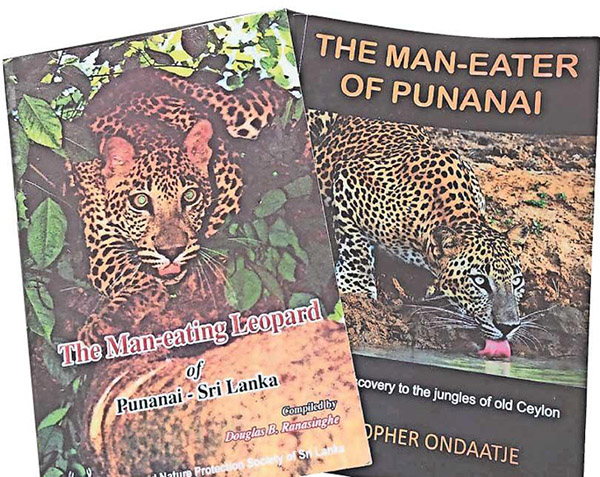 Books written on the Punanai leopard

One of the prominent legends of man-eaters is that of the Lenama Leopards that were said to have been roaming in the wilds in Lenama, an area that fell within the boundaries of Panama. A two-book series titled ’25 years of Life in the Jungle’ documents memorable moments of late Ven. Thambugala Anandasiri thera’s travails in the jungles. He came to reside in the Kutumbigala jungles in 1954 and was known for his efforts to clean and make conducive for living several ancient caves. In one of the accounts the priest states that the biggest leopards were seen in the wilds of Lenama. He says that the Lenama leopard never flees when it sees a human and that it isn’t ferocious when compared to other species in the cat family. However, legend has it that it was these leopards that were responsible for wiping out an entire generation of Veddas that lived in Lenama. But their appearance and identification have been shrouded in mystery.

A documented account of a man-eating leopard was that of the Man-eater of Punanai back in the 1920s who was notoriously known for devouring more than 20 people in a reign of blood thirsty terror. The incident even inspired Christopher Ondaatje to pen his book ‘The Man-Eater of Punanai – A Journey of Discovery to the Jungles of Old Ceylon’.

‘The Man-Eating Leopard of Punanai’ a book penned by Douglas Ranasinghe also mentions about another lesser-known man-eating leopard -the Man-Eater of Komari who’s short reign of terror transpired during 1936. Situated in the North of Potuvil, Komari has been a jungle settlement of around 10 houses. It is said that one of the leaders of the village shot the leopard during an encounter.

Quite interestingly, a reference to a man-eating leopard is also found in Sir James Emerson Tennent’s book titled ‘Sketches of the Natural History of Ceylon’ published in 1861. He states

“like other carnivora, leopards are timid and cowardly in the presence of man, never intruding on him voluntarily and making a hasty retreat when approached. Instances have, however, occurred of individuals having been slain by them; and it is believed, that, having once tasted human blood, they, like the tiger, acquire a habitual relish for it. A peon, on duty by night at the court-house of Anurajapoora, was some years ago, carried off by a leopard from a table in the verandah in which he had laid down his head to sleep..”