Published 4 days ago on January 2, 2021 In the Island Newspaper, Sri Lanka 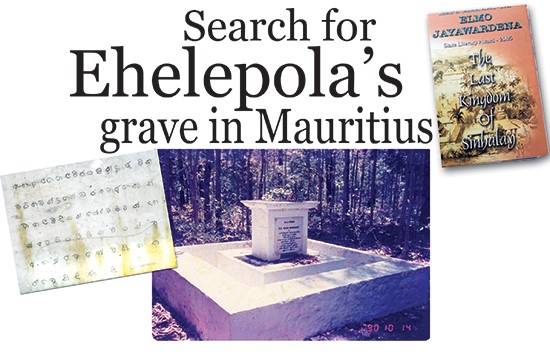 (The writer of the State Literary Award-winning book, The Last Kingdom of Sinhalay, prompted by what he saw in the Mauritius)

The SIA jumbo turned for the final approach on Plaisance International Airport. The night was cloudy and listless, the sky was demanding with a stratocumulus overcast. There was moderate rain over the airfield. My copilot who was flying the aeroplane was an experienced operator and he landed the big Boeing 747 with professional skill that received applause from the passengers.

We taxied and parked in front of the terminal. It was almost midnight; I’ve arrived in the island of Mauritius, not merely as a pilot but to start another one of my wild goose chases.

This one was a peach. I was going to look for Ehelepola’s grave. The first Prime Minister of the last King of Kandy, who I read somewhere, was buried in the island of Mauritius.

The story of Ehelepola is a tragedy that Lankans are familiar with. King Sri Wickrema Rajasinghe beheaded the sons and ordered the mother to kill the baby in a mortar by pounding the infant with a pestle. He then drowned Kumarihamy in the Bogambara Lake.

All this was done in retaliation to Ehelepola joining the British against the King.

I am no scholar nor historian, just a very ordinary aeroplane driver, or perhaps may be a wild-goose-chase man. Hence, I’ll leave the historical details to those who know better and get on with my chase. The only knowledge I had was that the grave was in a place called Pamplemousse. I thought that Pamplemousse was a place like our Kanatte cemetery and all I needed was to walk around and find the grave. A simple enough task for a lazy morning.

The little conversation I had with the hotel staff convinced me that the search was not going to be easy. My idea of looking for a grave in Pamplemousse was instantly laughed into extinction by the receptionist. Pamplemousse was an area bigger than Colombo, and it had so many cemeteries, and nobody ever heard anything about any Ehelepola, let alone where he was buried. Now things were getting a bit complicated, and I love complications.

Out through the door, into the first taxi and “take me to Pamplemousse” I said to the driver who came out of a yawn. We had the usual bargain for the price, which is more traditional than a necessity, and I let him win. His Cambric shirt and coral bead necklace gave him a left over “flower child” look and the way he crashed his gears and shot out of the palm lined driveway left me in no doubt that I had found my Man Friday to chase rainbows.

It was a bright morning, a typical Southern Hemispheric Spring with an Azure blue African Sky. One must have something to do; even if it is something totally stupid like looking for a long-forgotten grave in a totally unknown place called Pamplemousse.

Mauritius is a beautiful place especially in the mornings. The air is crisp and clean and the wind has a gentle blowing, the kind that soothes the soul. Pamplemousse was an hour away and I settled to enjoy the scenic pleasantness of the passing landscape and the limited conversation of the driver, who spoke halting English.

He of course was totally clueless about cemeteries and Ehelepolas. Off we went, the minor Fangio flower-child and me – he with his Great Gatsby cap, Walrus moustache, perhaps with thoughts wondering who this passenger fool was, and me in silent contemplation with my hopes on graves hitting cloud nine.

Shortly after 10 a.m. we reached Pamplemousse. A cup of tea in a little café, and inquiries as to where the nearest cemetery was, and off we went, the driver and I. By now he was my co-wild goose chaser, he voluntarily joined the idiot team, first as a driver, then as an interpreter and quickly got promoted to comrade moonbeam catcher.

The first cemetery was five minutes away. I was out of the car in a flash and walking in the paths between the dead and buried, looking for Ehelepola. Most names were French and it didn’t take me long to traverse the length and breadth and eliminate this cemetery from my agenda. Back to the car, a little conversation with some cemetery visitors (by now my driver was doing yeoman service in the translations) and off we went to cemetery number two, in a place called Pamplemousse alias wild goose country.

The day wore on, and the cemetery numbers were fast approaching the two digits. I was going on without any concession to sanity. The grave searching keenness in my partner was slowly dwindling down and becoming contagious. The sun was up and was beating the hell out of our enthusiasm.

Cluelessly walking among the dead, searching for something not even knowing what I am searching definitely added its weightage to the hopelessness of the situation. By now my soul partner had concluded that I had butterflies in my brain box and was content to let me do the walking and watch from the limited comfort of his Morris Oxford.

Only the stubbornness in me kept me going or rather the mule in me.

Mule sounds better than donkey – one must take certain liberties of elevation when referring to oneself.

A lot of tea, a lot of cafes, a lot of inquiries and a lot of cemeteries later, I gave up. My partner was delighted, and I was, well what can I say, I guess I was disappointed. It was past four o’clock and we had done about six hours of cemetery trudging. I had a flight to operate at two a.m. and it was time to go back to the hotel and get some sleep.

We drove back along another road through the jungle, tall trees and scrub bush. We almost missed it, yet the Gods were kind (They have been known to shed sympathy on clueless clowns like me) and I saw…no I felt…or was it premonition I don’t know, it happened so fast, the next thing I knew I was screaming at the driver to stop.

The monument was there, by the roadside, a little into the jungle, white and serene and standing by itself amidst the tall trees that stood like sentinels. This was a totally isolated place, in the middle of nowhere, a place called Power Mill Forest, Marcellemet, St. Andre, Pamplemousse. I have come to the grave of Ehelepola Wijesoondra Wickramasinghe Chandrasekara Amerakoon Wasala Modianse late First Adikar or Prime Minister to the King of Kandy.

It was approximately a ten-foot square memorial, clean and beautiful. It had a majesty matched by a sadness. That is the way I felt. It was obvious somebody had cleaned and cared for the monument. The whiteness gleamed in the shadows of the tall trees. The lettering was clear, one side in English and other side, in my very beloved Sinhalese.

I read the epitaph in my own language and felt a strangeness that I find hard to explain. The man, the tragedy, the history, the Sinhalese words in a jungle in a far away land all combined, gave emotions that I normally do not experience.

The strangest of all was a wreath of flowers, dead and withered that lay on the white pedestal. Somebody else did come by this place and not so long ago. Perhaps a week or ten days the most. He or she was no stranger like me.

This was someone who took the trouble of cleaning the grave. Someone who carried flowers and laid them for a man who died 165 years ago. Even in this far away land and remote place, someone had cared to remember.

History and folklore branded him a traitor. Yet the truth could be so very different. The English banished him to Mauritius. The English governed our destiny and wrote our history. A century and a half later, it is difficult for us to know what really the truth was. We have no intimate knowledge of the man or the events. We do not understand the reasons, the fears, the actions and the emotions that took place so long ago. We cannot presume and we should not judge.

To us, Ehelepola must not be the traitor nor the hero, but a man, who lived life with moments as bitter as a man could remember. A human being who must surely have suffered at the tragic and gruesome death of his beloved wife and children and grieved at having been banished from his home country by a power that is alien to be buried in a foreign land, not under the soft comforting earth of his beloved Lanka.

I stood before the monument with mixed feelings. Here was a man who was born to a heritage. Noble in birth equaled to the common and unknown in his death and buried in a strange land so far away from his loved ones and beloved homeland.

I spent a few moments in contemplation and walked away – making a solemn promise to the man buried in this forsaken corner of the earth that I will bring his story to his country and his own people.

That night I took off from Mauritius to Singapore. A pleasant night to start a ten-hour sector. It had the peculiar beauty of an African night that appeals to aviators. Cool and clear, with a light wind as added flavour. The heavy jet roared down the limited runway and eased into a sky that was beautiful.

Somebody had lavishly switched on the whole Milkyway and overhead a million tiny stars twinkled and splashed in a velvet blue midnight sky. I sat there in the dimly lit flight deck lulled by the big jet engines thinking of the day and the events I had left behind. I had come to find a grave, merely as a fancy, but I had found much more. I had found part of history, a tragic part of history that told the tale of a man accused and judged by society, long forgotten by his people buried in isolation in a scrub jungle in a place called Pamplemousse.

Yet someone remembered and that someone cared, because the flowers on this grave were most certainly not the work of sympathetic angels.

My mind kept wandering back to the withered wreath of flowers. I set course and settled for the long night, and as I lost sight of Mauritius under the blanket of stars, I kept wondering who the flower bearing angel was, and would have given anything to know why the remembrance after so long. (This article was first published about 30 years ago.)