December 1961, and it was the ‘end of year’ concert at St. Benedict’s College, Kotahena. Students with any kind of talent were invited to get on stage and perform. I decided to form a trio to sing two harmonized songs. Stepping off the stage after our performance I was met by this guy with a home-made guitar (we called it a log-guitar in those days), who introduced himself as Colvin Perera. He requested me to back him on a couple of instrumental numbers – ‘Guitar Boogie’ and ‘Quartermaster’s Store’ – which I gladly agreed to do.

At the end of his performance, Colvin – a former student of St. Peter’s College, Bambalapitiya – whose other names were Lucien Merle, invited me to join a group he was forming. I accepted his invitation and eventually travelled from my home in Hulftsdorp to Dehiwela, where I was introduced to Anton de Mel who played bass guitar. As time went by I took up playing the bass guitar with Anton Gunewijeya on rhythm guitar and Harris Jurangpathy on drums. Lucien worked tirelessly to get the group as many gigs as possible. Hence the birth of THE JETLINERS. The rest is history. 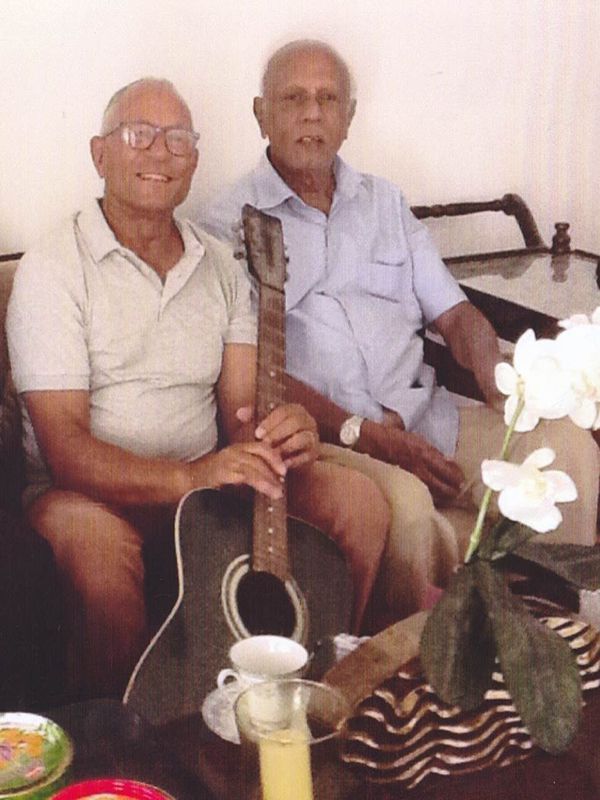 Lucien was a guitarist who would play tunes to perfection. He never missed a note. With Tony Fernando as manager, we were introduced to performing at dances at all the leading hotels in Colombo. Lucien was not in favour of doing late-night gigs, and would often complain that people should spend time at home instead of dancing till the early hours of the morning! At times we would notice Lucien playing with his eyes closed. No, he wasn’t concentrating on the song but actually asleep!

I always made it a must to visit Lucien whenever I holidayed in Sri Lanka, to show my appreciation to a person who started me off in the music scene. Over a few ‘shots’ of Ceylon Arrack we would reminisce about the good old days, and I never failed to thank him for having faith in me and inviting me to join his group ‘The Jetliners’.