The border closure between Victoria and New South Wales came into effect overnight, as the Covid-19 cluster linked to a Melbourne restaurant rises to 10. 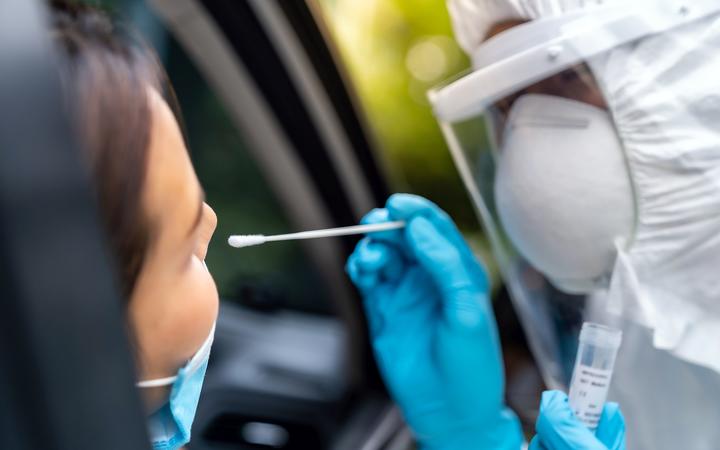 At the stroke of midnight, police vehicles joined the ends of queues at each border checkpoint to mark the midnight closure. Travellers were told earlier on Friday they would need to be in line before 11:59pm in order to make it home.

“At midnight, regardless of how long the queue is, we’ll have a police car go to the end of that queue,” Victoria Police Deputy Commissioner Rick Nugent said earlier.

“If you are there by midnight, regardless of whether you’re actually processed, you’re included as arriving prior to midnight.”

Travellers are no longer allowed to cross the NSW border into Victoria unless they have an exemption or a permit as a traveller from a separate state like Queensland or the ACT who solely travelled through NSW to reach Victoria.

Victorian authorities yesterday said people arriving after that time would have to enter mandatory hotel quarantine, but today clarified that was an option that would only be extended in exceptional circumstances, and most people would simply be turned back.

“We did not design the hotel quarantine system to enable people who went on holiday in NSW to come back a bit later,” Victoria’s Covid-19 response commander Jeroen Weimar said.

Two new cases of coronavirus have been linked to a Thai restaurant in Melbourne’s Black Rock, taking the total number of cases in the cluster to 10.

A Victorian government spokesperson has told the ABC the two cases were at the restaurant on 21 December, which authorities are currently treating as the starting point of the outbreak.

The two people then travelled to Lakes Entrance on December 28 and 29, before heading onwards to Bega and Bermagui in New South Wales.

NSW Chief Health Officer Kerry Chant said the Victorian pair dined at the Great Southern Hotel in Eden on December 30 between 5:00pm and 6:30pm, and also at Bermi’s Beachside Cafe in Bermagui on December 31 between 9:00am and 10:00am.

The government spokesperson said state health authorities contacted the pair on 31 December to inform them they were close contacts.

By that time, the pair were already in line to be tested in New South Wales.

They are now back in Victoria and are being supported to isolate.

Hundreds of contacts in self-quarantine

About 170 people have been identified as close contacts of the confirmed cases in the community, and have been told to self-isolate.

Weimar said the signs were “positive” that transmission of the virus was being stopped.

However, he said he was expecting more positive cases to emerge from the people identified as close contacts, and that the cluster was not confined to suburban Melbourne.

“We have one of these positive cases which is in Leongatha, so the close contact is now quite a wide area,” he said.

“My appeal would be don’t think this is just a Bayside suburbs, Mitcham issue, it is not only a Melbourne issue, it is a Victorian issue.”

The Health Minister, Martin Foley, said genomic testing was underway to determine the origin of the outbreak, but it was expected to confirm it originated in New South Wales.

“The NSW link is still our primary line of investigation for this outbreak,” he said.

Weimar apologised to people who faced long waits or were turned away from testing sites over the past 24 hours.

“We are bringing back a large number of hard working clinical staff from their holidays in order to resource up these testing centres. There were three or four additional testing centres set up yesterday,” he said.

A specific site was being set up to handle testing related to the Holy Family Parish congregation at Doveton, after around 100 people linked to the church were identified as close contacts.

More testing sites will be introduced over the weekend, which will be listed on the DHHS website.

Decision to close the border with New South Wales defended

Weimar defended the decision to close the border with New South Wales at midnight tonight – a decision that led to chaos at border checkpoints overnight.

Many drivers queued for hours to cross into Victoria from New South Wales, and some said their permits were not checked by police at the border.

“We’re back to having coronavirus in the heart of our community, not just in metro Melbourne, Leongatha, Barwon Heads, we’re now dealing with coronavirus again and we will deal with it,” Weimar said.

“We refuse to be in a situation where we are going to import it knowingly.

“This is about managing risk. We wanted to give people as much notice as possible to say we want you to come back.”

People who returned before midnight on Thursday night must have a Covid test and isolate until they receive a negative result.

Anyone who missed that deadline, but returned before midnight must get tested and isolate for 14 days.

“That staged system of getting back without needing to go into isolation then quarantine, I think that’s appropriate,” he said.

“People had been given lots of warning about being in New South Wales, although I do agree 3:30 on an afternoon before midnight for people to get back is pretty tight.”

Coronavirus fragments picked up in wastewater testing in Gippsland

DHHS is urging anyone in the Lakes Entrance area with coronavirus symptoms to get tested, after Covid fragments were detected in wastewater testing.

The fragments were detected on 29 December, which is the same day the two most recently recorded coronavirus cases were in the area.

There will be an increase in wastewater testing in the area as a result of the discovery.