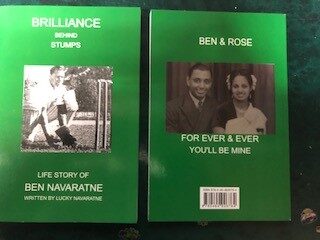 “His Brilliance is my Confidence.”

The world around us have ample information about the cricketing career of my Dad. True Brilliance, a tiny shine (light) in him is the life of my dad that impacted his offspring. The Blood of my parents are still alive in the 8 children living his Legacy.

The last few years of his life on earth, he was questioning his own faith he inherited from his parents.

He was inflicted with a sickness; statistics show: only 1 in 4 million humans are inflicted with this dreadful decease. In 1979, six months before he passed away, I had returned to see my Dad who was living on Blood transfusions for the last four years. His common phrase was “How the mighty has Fallen”.

In 1960, I was barely 13, my Dad was a Mighty Force, his strength was his Maker, we inherited this theological Faith through our fore-fathers.

Troubles for my Dad began in 1956, with SWRD becoming the head of our beautiful Paradise Island.

My parents who were Sinhalese, came from the line of Roman Catholic Faith embraced by their fore-fathers. So, we as their children were automatically born into this Colonial Faith brought in by the Portuguese in the 16th century. [B]

By 1958, my family had grown to 10 members, one short of a cricket team. Life was beautiful for the 10-year-old, yet was extremely tough for my parents who had to feed 10 mouths with a single salary and attend to all other needs of the huge growing family.

Under the pretext of making the whole country “Swabasha”, Banda became the 4th Premier of the Pearl of the Indian Ocean.

SWRD was a Brilliant politician and a humble friend of my Dad.

My Father had to fore-go his prime job at the Supreme Courts under the Language Act.

On the way to school from Thalangama to Kotahena in my Dad’s Ford Prefect, 5 siblings packed in the back seat, we could see burning vehicles, houses and unrest on the streets passing through Maradana.

I was not old enough to comprehend the situation outside my household.

Our motherland was colonized by the Dutch and finally the British in the 18th century.

We received independence in 1948, when the cream of the society was educated in English, including the Brilliant SWRD (Banda).

Just before the tragic event of September 26th, 1959 on SWRD’s life, the faithfulness of friendship, my dad was offered a job by the Government of Ceylon, in the High-Commissioners office in Madras for 4-year contract.

My family was so excited, my dad sold everything we had including the car, Piano and furniture. The house we lived in Kotahena was given out on rent.

The Lethal Blow on my family came from the “Bridgettian” who was spoon fed and educated by the sisters of the faith she Discriminated, for her Political gain, just because we were Roman Catholic.

She shook hands with my parents when she visited us in Madras in 1960, while we were in India and she used an innocent family to carry out the cruelest deed on my life.

After 60 years, I made contact with this family and I was able to close the chapter in me for the hatred I carried in my heart for the name that tried to destroy my family.

Without notice, my dad was Forced to return home in 11 months breaking the contract he signed for 4 years with the Ruthless-Governors.

Retuning back to the Island (Srilanka), with no place to live, our family of 10, was scattered among our relatives.

I had to do my “O” level in Sinhala, which I managed with great difficulty.

The discrimination was purely aimed at Sinhalese- Roman Catholic.

Those who had connections to the colonizers, managed to leave the Island to Australia, England and other European countries.

The harm “She” did to my family was most felt by me at the age of 13, I was just beginning to grasp life.

My dad managed to strike a contract with the British to work in Borneo for five years from 1962 to 1968. This era would have been the most calmful years of my dad’s life. He was only able to take five of his children with him to Borneo. I was left behind for five years in Srilanka, my most crucial years of growing up.

My parents and the five siblings, returning to Srilanka in 1968, the inherited colonial-Faith of my dad could not overpower the tyrant forces of the world around him, troubles of survival under the Discriminators showed up in his health.

I was able to escape the tyrants of Srilanka, with my wife and the 10-month-old to a new land, Canada,

No one should feel guilty, but rejoice in what I am telling you today.

All my Siblings were rewarded without measure are still alive and extremely happy. Especially me, who re-lived my teen years, which I missed out with my parents, at the age of 62, with my grandson.

Today, my Jediah is 21 and finished college and tremendously happy with life.

None of my siblings have questioned, why my Dad had to leave this earth at 64?  except me.

So, today the world is able to read what took place in my family in the book I have put together. “Brilliance Behind the Stumps”. [C]

Everything turned out beautifully for my family, Heroic SWRD was just an instrument in the equation. It had to be that way as planned by our Maker. [A]

Conclusion: Ben and Banda were both born in Srilanka, shared their Birthdays by a few hours apart, in the same era, committed to their own inherited Faiths coming down the Generations.

They were both Brilliant in their ways of whoever they were meant to be.

The remarkable difference they transmitted to my life and the rest of humanity is written in Blood.

Today on Earth, only thing written in Blood is Scripture.

The Bible is the Life-Blood of our Maker on Earth, written in letter as Scripture, before the Creation of Mankind.

Scripture cannot be altered by any Human Source, dead or alive, but only by the one who purchased our souls with His own Blood.

The truth of this article is Written in Scripture verse Luke12:4-5, “I tell you, my friends, do not be afraid of those who kill the body and after that can do no more. 5 But I will show you whom you should fear: Fear him who, after your body has been killed, has authority to throw you into hell. Yes, I tell you, fear him.”

This is the life lesson humanity gained from my Dad Ben: “The Fear of our Maker!” His Brilliance is my Confidence.