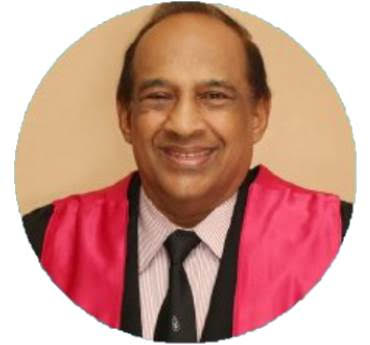 “This story is about the introduction of red ball cricket to Polonnaruwa. It is an event that took place thirty eight (38) years ago and is not an easy task to recollect everything in detail. I also wanted to include some photographs as they an integral part of any story. I must admit that I could not find all the photographs taken at that time. However, those that I was able to find, depicted our youthful looks and including these photographs in the story was fully worth at the end. Being one of the pioneers, I have done my best to gather my thoughts in this short article to bring out the salient aspects of this important historical sports event for the benefit of sports lovers, especially those interested in promoting the game of hard ball cricket throughout Sri Lanka with one clear message: there is plenty of talent out there”

“A Dead City with No Sporting Activity”

The Ancient City of Polonnaruwa was “dead” as far as sporting activities were concerned. We could walk and see the glorious architecture of the monuments of the ancient city complex, do a relaxing walk along the bund of the majestic Parakrama Samudra or even make an occasional visit to a hotel in the tourist resort, relax, swim and enjoy a drink or two with  friends. We were trapped with nothing much to do after work. We were interested in some sporting activity. To be previse, the villagers did play a game called “Elle” (softball). However, that was not our game!

Sports play a vital role in modern contemporary society. It is an integral part of life, essential for the physical and mental well-being of individuals.

Fortunately, in the 1980’s, the people who came to serve in the District of Polonnaruwa in various capacities were interested in sports. We teamed up very well, also drawing together the “top” people in Polonnaruwa and discussed the formation of a club. There was unanimous support for this cause. The sole purpose of the club was not only for fellowship, but the greater ambition was to introduce “hard ball” or red ball cricket to the District of Polonnaruwa. Although red ball cricket was popular in Sri Lanka, the game was not played in this District at that time. We were fortunate that another sports enthusiast and a professional planter had come to work in Polonnaruwa at that time as the CEO of a private company. He extended his unstinted support and being a good organizer in all aspects later became the “live wire” and first secretary of the club. He was also able to obtain the support of his company and this became very useful as we did not have any resources to embark on this project. He is none other than the amiable and flamboyant personality from the hill capital of Kandy, Ranjith Ellegala.

Initial discussions towards forming a cricket club were very favourable with support from all concerned. The Government Agent of Polonnaruwa, Mr U G Jayasinghe and the Additional Government Agent, Mr Palitha Elkaduwa extended their unstinted support for this idea.

Ranjith Ellegala together with his company assistant Karunasena Gamage played a key role in getting the initial formalities organized. Dr B F S Samaranayake and Dr Gamini Goonetilleke represented the doctors in the District. Mr M T Perera (Ted), the Manager of the Bank of Ceylon at Polonnaruwa was given the task of looking into the financial aspects of the club. The Politicians in the District gave their blessings for this worthy cause to uplift the sporting activities in the rural District of Polonnaruwa. Many sports enthusiasts in Polonnaruwa also participated in this discussion. They are too numerous to mention due to lack of space, but  their names are listed  in the PDCC  committee which you will see below. 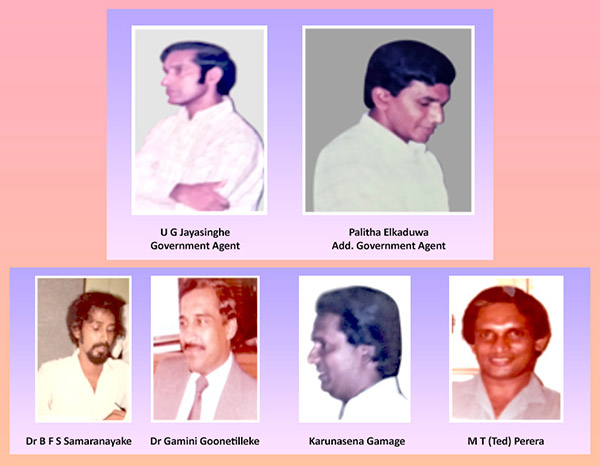 The Birth of the Polonnaruwa District Cricket Club (PDCC) 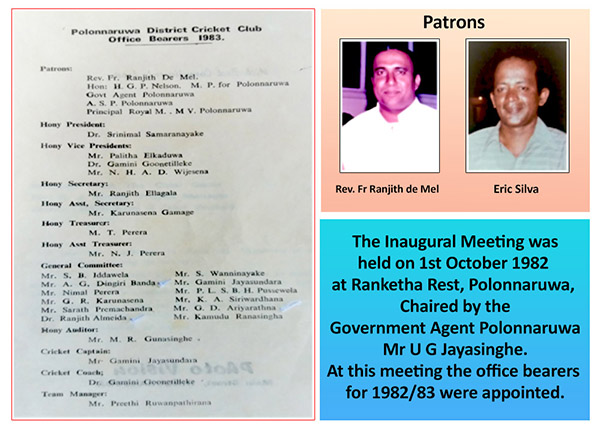 The Task of the PDCC Committee

The first task of the PDCC committee was to organize the facilities and obtain the basic cricketing gear. The only ground that was suitable to play cricket was the ground at Royal College Polonnaruwa situated in the New Town. We obtained permission to use this ground through the courtesy of Mr Palitha Elkaduwa, the Director of Education and the Principal of Royal College, Polonnaruwa. Thereafter a lot of hard work went into getting the facilities organised to play the game:

Many sponsors came forward to help the club in various ways. They saw things moving fast and helped us to achieve our vision to “break new ground” in Polonnaruwa. Everything fell into place in double quick time. I THANK THEM ALL.