In 288 BC, King Asoka of India sent his daughter Sangamitta with a sapling of the Bo-tree to Sri Lanka 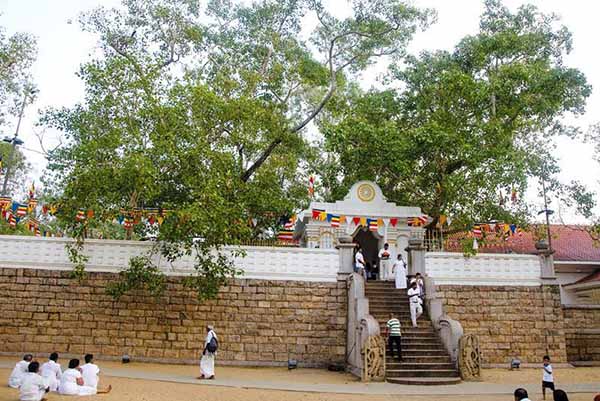 The Jaya Sri Maha Bodhi, a sacred site for Buddhists the world over 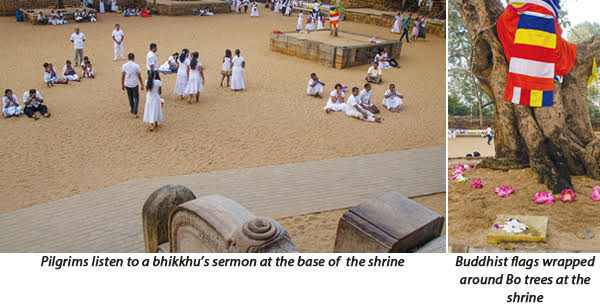 The introduction of the Sacred Bodhi Tree, the oldest historical tree in the world and the most venerated, is commemorated by Buddhists in Sri Lanka on Unduwap Poya (full moon) day. Unduwap Poya is popularly known as Sri Sangamitta Day, because it was the missionary nun Sangamitta who brought the sacred Bodhi to the country. It was brought as a sapling of the Ficus Religiosa where Gautama Buddha attained enlightenment.

Sangamitta was the sister of the Apostle Mahinda, who introduced Buddhism to Sri Lanka. His missionary work during the reign of King Devanampiyatissa (250-210BC) was singularly successful. Many men and women wanted to be ordained as bhikkhus and nuns.

The rules, however, forbade Mahinda from ordaining women. Accordingly, Arahat Mahinda advised the King to request Emperor Asoka of India to send his sister, Sangamitta, with a party of nuns for this purpose.

He also suggested to request the Emperor to send a branch of the Bodhi Tree at Buddha-Gaya to be planted in Sri Lanka as an object of veneration which would always remind the devotees of his teachings.

King Devanampiyatissa appointed his nephew, Arittha, for this job. His mission was successful and Sangamitta duly arrived with a group of nuns and a branch of the Bodhi Tree in a golden pot. The king, who had rushed to the port to meet her, waded neck-deep in the sea to receive the sacred branch, and in a gesture of proud humanity took upon himself the duty of acting as a guard outside its temporary residence on the shore.

From there the sacred sapling was taken in great ceremony to the capital city of Anuradhapura. On the way, the royal party broke the journey at Tivakka Bamunugama at Tantirimale, where a large shrine was later built to mark this occasion.

Today, the statue has been restored to its former glory by the Department of Archaeology.

In Anuradhapura, the sacred Bodhi still stands on the spot where it was originally planted in the King’s pleasure garden, although the garden is no more.The Kings who succeeded Devanampiyatissa improved the site with ornamental gateways, a flight of steps and channel systems for watering the tree.

Even after Anuradhapura was no more the capital city and wilderness overtook the dagobas and other monuments, the Bodhi Tree was protected by the villagers.

They lit bonfires around it every night to ward off wild animals. In old Anuradhapura, now declared a sacred city, the once ostentatious buildings are no more today other than an inanimate patchwork of the stone masons’ and craftsmen’s art.

The only living thing is the Sacred Bodhi Tree. Propped up on platform upon platform, enclosed by white-washed walls and an iron railing, and surrounded by altars laden with perfumed flowers and oil lamps, it still remains green, a focal point of worship and pilgrimage once again.

Today, iron crutches support the venerable boughs of this holy tree, which is surprisingly slight for its age. It stands among the younger trees on a special platform, a bodhighara, encircled by a gold-plated railing. Most of the Bo trees in Sri Lanka, and some in Burma and Thailand, have been nurtured from the Sri Maha Bodhi’s seeds. Its leaves are said to have inspired the shape of Sri Lanka’s dagobas. 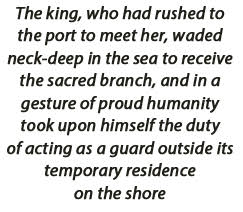 It is fitting that the Sacred Bodhi, once part of the tree at Buddha-Gaya, continues to grow in Sri Lanka where the teachings of the Buddha, almost forgotten in India, continue to flourish. The Sri Maha Bodhi is 2,235 years old. Carbon dating tests have shown other trees to be

older: the cedars of Lebanon, some olive groves in Palestine, the baobabs of Africa, and the California Redwoods which are 3,600 years old. But none of these trees had a continuous historical record such as the Jaya Sri Maha Bodhi planted in 245 BC and venerated to the present day.

The leaves of this unique tree were described by Robert Knox, an English captive in Sri Lanka in the 16th century as, “ shaking in awe at what they saw in Buddha-Gaya.”

Devout Buddhists listening to the pattering sound are certainly reminded of the Great Enlightenment and in no doubt of its momentous consequences to themselves.

Above our heads the pointed leaves of the sacred Bo-tree twisted in the morning breeze, catching the first rays of the sun rising over Anuradhapura – as it has done for 2,300 years. Below us women attired in white chanted Saddhu, Saddhu