Three new cases of Covid-19 linked to Sydney’s northern beaches have been recorded overnight but three other infections outside the cluster remain unlinked. 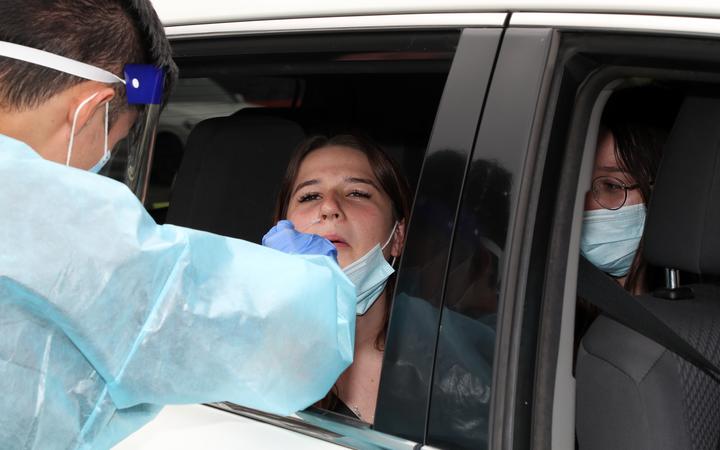 A health official takes samples for Covid-19 tests from residents of the northern beaches in Sydney.
Photo: AFP

The three cases on the northern beaches were recorded before 8pm yesterday, and were connected to the Avalon outbreak and already in isolation.

Three other cases were diagnosed after 8pm in Wollongong, Sydney’s inner west and Sydney’s northern suburbs.

Contact tracers are still working to establish whether those cases are linked to the Avalon cluster and Chief Medical Officer Kerry Chant said more would be known this afternoon.

“Often we have a period when we don’t understand the linkages, but by late in the afternoon we hope that [through] the cooperation of those individuals we will end up having a better picture, we will release any information that is relevant to the public to respond to straightaway,” Chant said.

Premier Gladys Berejiklian said this highlighted the need for the entire state to be on high alert.

“Ironically as we see time move on, the threat in greater Sydney is almost becoming as equal to parts of the northern beaches,” she said.

“You might think you are in a remote part of NSW or in a regional community, but you may have been with someone who has been to another part of the state where they could have acquired the virus, please be on your toes and be on high alert.”

Around 16,000 tests were conducted in the state yesterday but the Premier said the numbers needed to be much higher.

“We would like to see the moderate levels of testing go back to high levels of testing … [which] give us a bit of confidence that we are closing in on all those opportunities to find the missing strain of the virus,” Berejiklian said.

Berejiklian said she was “aghast” that people from the northern beaches defied stay-at-home orders to attend a wedding in Pyrmont last Sunday.

NSW Police confirmed the bride and groom were two of 12 northern beaches residents at the wedding and were fined for breaching public health orders.

“The community by and large has made great sacrifices over a considerable period of time … [this] is the type of behaviour we are trying to discourage,” he said.

“We don’t want you to put people at risk by acting in a way that would expose others to the virus so it is inappropriate behaviour which we have seen before.

“But it is the minority with the majority having been abiding by current health orders and we ask that you continue.”

Berejiklian offered a message of support to residents in the northern beaches who had been staying home and acknowledged frustrations were growing.

“Please know there is light at the tunnel,” she said.

“We want to encourage businesses to keep trading and the NSW Government is considering options on how to support you.”

Chant said none of the 122 active Covid-19 cases were in intensive care and 97 percent were being treated in non-acute hospital care.

However, she said sometimes the second week of illness presented more health complications.

“So it is important that we do not take from that that Covid is a mild disease, it can have tragic and devastating outcomes,” she said.

The premier said she would support the Federal Government’s cancellation of visas for any backpackers involved in a gathering at Sydney’s Bronte Beach on Christmas Day.

Earlier today Immigration Minister Alex Hawke said the government would assess anyone on a temporary visa caught breaching public health orders in the lead-up to New Year’s Day celebrations, including those found to have breached rules last week.