Home  ⁄  Article  ⁄  Lankans who volunteered for service with the Royal Air Force during World War 2
Dec 28, 2020 Posted by nzuser In Article Comments 0 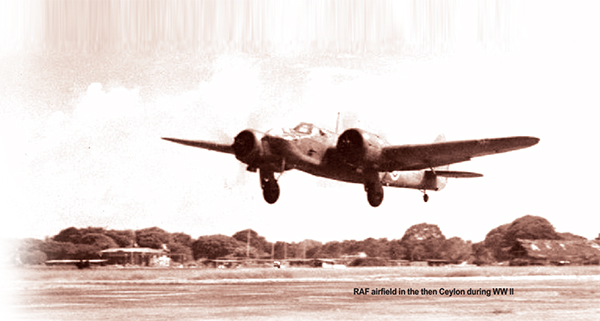 Within a year of the outbreak of World War II, the colonial government began looking for Sri Lankan volunteers to serve in various capacities with the British forces including the Royal Air Force (RAF).

Accordingly, 15,000 applied to join the RAF. Out of this lot, 15 were initially selected and sent for training at the RAF Cranwell Flying School in the United Kingdom in 1941. But a paper cutting dated the Sep 1941 gives only twelve (12) names even though it says in the beginning fifteen (15) Ceylonese for the RAF have arrived in Britain.

Of the 15 Lankans who joined the RAF during WWII , only four were selected for fighter pilot training. They were Emile Jayawardena, Noel Peiris, Rex de Silva and Shelton Flamer-Caldera who were sent to operational squadrons soon after completing their training.

Chelliah Kanagasabapathy a Sri Lankan, also a RAF Pilot in WW2 mention of another batch of Sri Lankans who joined the RAF. He says that 18 persons were selected from Sri Lanka to join the RAF in 1941 and were sent to London, England for training.

According to that Charles Ameresekere who has done extensive research on the subject, three more batches of Sri Lankans have served with the RAF in WW2.

“There were at least five batches of Ceylonese volunteers (approx. 15 in each batch) that served with the RAF in WW2. They were all very brave to volunteer for such dangerous duties, so far from home. Many were Killed in Action (KIA), “he says.

One of the names that has been uncovered as being another Sri Lankan who has enlisted in the RAF during the war is that of Michael Dias Bandaranaike who joined the RAF Coastal Command and served as a tail gunner flying in bombers.

Charles Ameresekere also says there was even a female pilot, Aimee Jonklaas, a Ceylonese by birth (born in Gampola) that served with the Air Transport Auxiliary (ATA) ferrying aircraft for the RAF. The ATA was a civilian aircraft ferrying organisation tasked with delivering aircraft (once manufactured) from factories to the operational stations of RAF and RNAS.

Another four Sri Lankans who have joined the RAF in 1944 are TB Daswatte, L Vanden Driesden, HAS Gunawardane and BSTE Vanderwall. The others whose names have been uncovered are those of P B Mawalagedara who had joined Air Ceylon after being released from RAF while the Memorial Board at Trinity College Kandy for Old Trintians who served in the Second World War mention the name, E S Godlieb under Royal Air Force.

Charles Ameresekere whose research yielded much of the information says he is at present engaged in writing the biography of the late AVM Rohan Amerasekera DFC* and also several books on “Orders, Decorations and Medals relating to Sri Lanka / Ceylon from 1795 to the present” and one titled “Boys from Ceylon” – Ceylonese in the RAF 1939-45.

“I have been researching these books since the 1990s and was fortunate to be in contact with some of these airmen and /or their relatives. Unfortunately, all of them have now passed away. I have spent years going through passenger lists and RAF records to figure out the 5 batches of Ceylonese that served in the RAF during WW2”.

The names of Sri Lankans who joined the RAF in 5 batches during WWII are as follows: –

Ameresekere also says some of the others who joined the RAF, probably on their own were K K Nagalingam, R W M (Mickey) Dias Bandaranaike, Gnani Nadaraja, G E A Ebert.

Those researching the history of Sri Lankans who served in the RAF would be grateful if any readers having more information, documents or photographs on the subject and share the same with K.W.Kirinde via email on kirinde@gmail.com.