Situated about four kilometers from Haputale and designed in Tudor and Jacobean style, similar to Leeds Castle in Kent with solid granite walls as well as long narrow windows and chimneys, Adisham Bungalow is situated in a spectacular environment with undulating mountain ranges and breathtaking valleys. The well-maintained charming gardens with blooming flowers of the Bungalow have the allure of English Gardens. The terraced well-manicured lawns, flowerbeds as well as the orchards are etched on the skyline to take the shape of an outline known as “Sleeping Warrior”.

Visitors to Adisham are enchanted by the melodious chirpings of green barbets, paradise flycatchers, blue magpies, horn bills as well as some endemic birds which frequent the area.

The railway line between Haputale and *Idalgashinna Railway Stations is situated below the Bungalow.

Situated in the verdant mountains of *Uva, Adisham Bungalow is a British Colonial Era heritage and visited by thousands of tourists annually. The Bungalow is similar to a Rock Fortress in the cool climes of Central Highlands.

Sir Thomas Lister Villiers, the creator of the charming bungalow was an English aristocrat and planter born in 1869 in Adisham Rectory in Kent. He served as the trustee of the Church of England. Sir Thomas arrived in *Ceylon as a youth to work as a trainee in Elbedde Estate in *Bogawantalawa. 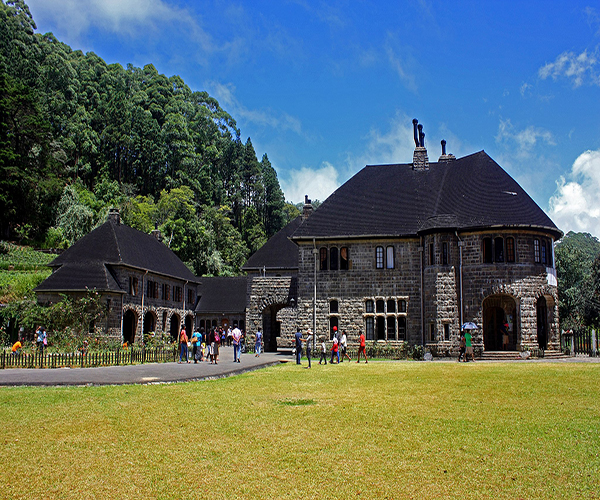 He got married to Evelyn Hope, daughter of planter W.H. Walker. A keen painter, Lady Villiers spent her days pursuing her talent and her paintings adorn the walls of Adisham to date. There are 25 oil and water color paintings adding glamour to the walls.

In 1905, Sir Thomas joined George Steuart, a trading and estate agency house in Colombo and rose to the position of Chairman, a position he held until his retirement in 1948.

While serving as the Chairman of George Steuart Company, Sir Thomas commenced constructing his dream home in 1929. Situated about 1525 meters above sea level in *Haputale on a land surrounded by the beautiful pine forests and *Tangamalai Bird Sanctuary, Adisham Bungalow is similar to an English Castle.

When constructing Adisham Bungalow, Sir Thomas wanted the Bungalow similar to his country home in Kent with vivid memories of his childhood. Adisham is a luxurious abode; Burma teak covered roof, doors, windows, paneling, staircase as well as the floors done in teak and spacious rooms of the Bungalow with fireplaces.

During Sir Thomas Villiers’s stay in the Bungalow, they had entertained the social elite of Ceylon. Among the distinguished guests was the Governor of Ceylon as well as many prominent personalities of British Colonial Era. Lady Villiers, the Chatelaine of Adisham had been a sociable and nice hostess for her visitors.  Salubrious climate of Haputale along with luxurious facilities of the Bungalow, paved the way for guests to relish a luxurious abode during Villiers’ stay in Ceylon.

A unique feature of the Bungalow are wind turbines fixed on the roof which sent cold wind to the fireplaces and heated the rooms, an amazing technique. Another remarkable feature of the Bungalow is the water system where water obtained from the hillside is sent through the pipes from the boiler room to many parts of the building including the upper floors without using a single motor

As Sir Thomas preferred a luxurious lifestyle in Sri Lanka similar to his lifestyle in Kent, he imported fine furniture, linen, carpets, porcelain, fine silverware as well as high quality glassware from the United Kingdom for the Bungalow.

Portraits of the Dukes of Bedford and the Clarendons, Sir Thomas’ relatives adorn the pillared landing on the main staircase.

According to folklore, Indian masons were employed to do the stone work of the Bungalow.

There are many large rooms in Adisham Bungalow similar to present day suites in star hotels. Sir Thomas and Lady Villiers occupied the ‘Blue Room’ and the ‘Horse Shoe Room’ beautifully furnished and well-maintained to date.

On a clear day, breathtaking vistas of *Hakgala, *Pidurutalagala, *Namunukula Mountain Ranges as well as *Diyatalawa Army Camp can be seen from Adisham Bungalow. There is a wing in the Bungalow with spectacular views of the Uva Valley.

Adisham Bungalow is a pleasant memory of Villiers’ presence in Ceylon. Every nook and corner as well as each and every stone of the Bungalow of the majestic mansion is a memory of yesteryear.

Among the notable and well preserved furniture, the Georgian gate-legged table set for serving tea with Wedgewood jasper china and the Dutch marquetry card table enhance the majesty as well as elegance of the Bungalow.

The library of Adisham Bungalow with excellent and valuable books on diverse subjects conserved in cupboards is a well-maintained treasure trove.

After retirement from George Steuart Company, Sir Thomas returned to the UK and the Bungalow was owned by Sedawate Mills in 1951.

In 1961, the Roman Catholic Church purchased the Bungalow and converted it to a Monastery, the Adisham Monastery, to serve their novitiate, those who are trained to enter the monastic life.

At present, Adisham Bungalow is a monastery run by Benedictine Monks, a congregation of St. Sylvester.

The priests at the Adisham Monastery maintain the flower beds and orchards surrounding the Monastery with the assistance of villagers. They cultivate strawberries, oranges and peaches and the fruits cultivated at the orchard are used to manufacture delicious jams, cordials and chutneys which can be purchased from the Adisham Shop situated in the premises of the Bungalow. Adisham products are natural and delicious without any flavors or additives. As the Bungalow is at present a monastery, the entire building is not open to visitors except the main sitting room which was originally used as Sir Thomas Villiers’s library.

Adisham Bungalow is open for sightseers during school holidays, public holidays and weekends from 9.00 a.m. – 4.00 p.m.

As Adisham is a monastery, it is necessary to maintain its serene edifying atmosphere and divine peace when visiting it.