By Rebecca Armitage and Lucia Stein for the ABC

Christmas at Sandringham is about family and tradition. It’s light-hearted moments where the Royals come together to play board games or exchange gifts and more formal ones dictated by extremely strict protocols developed over decades. 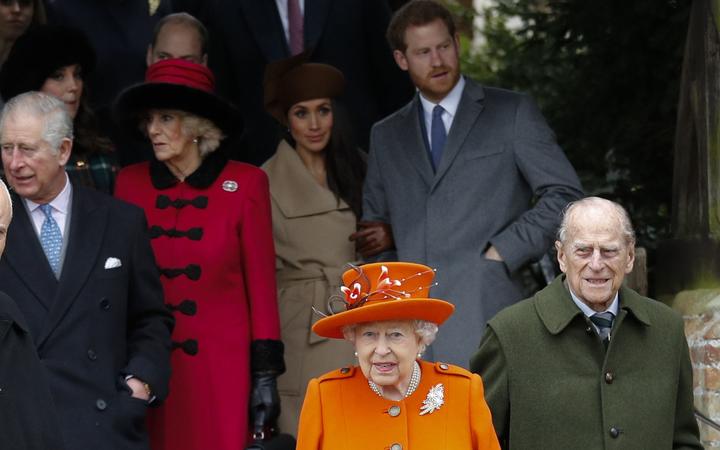 Members of the UK’s Royal family, including the Queen and the Duke of Edinburgh leave St Mary Magdalene church in Sandringham on Christmas Day, 2017.
Photo: AFP

For those lucky enough to make the list, it means having up to seven outfits ready for Christmas Day alone – and that doesn’t include a pair of stretchy pants for dinner.

But after a year plagued by coronavirus, lockdowns and scandal, it appears Christmas will be a much more toned-down affair with everyone spending the holiday apart.

The Queen and the Duke of Edinburgh will instead spend the holiday at Windsor Castle, celebrating “quietly” at their Berkshire residence.

That means we won’t be seeing the usual snaps of the family strolling to St Mary Magdalene church in Sandringham for the Christmas service.

Instead, the BBC reports that the Queen will skip church on Christmas Day to avoid large crowds. Her Christmas Day speech will be broadcast at 15:00 GMT.

The Duke and Duchess are delighted to share a new image of their family, which features on their Christmas card this year.

— The Duke and Duchess of Cambridge (@KensingtonRoyal) December 16, 2020

As for the other members of the Royal family, the Duke and Duchess of Cambridge haven’t confirmed what they’ll be doing yet, telling a crowd earlier this month that “it’s difficult to know what to do for the best”.

Prince Harry and Meghan’s plans are also still in the air, although there are reports they may be spending it at their home in the United States with Meghan’s mother, Doria, following others in the family in having a more scaled-back festive season.

We’re thrilled to receive wonderful Christmas wishes from our Patron, The Duchess of Sussex, who also made a personal donation, helping dogs, cats and our community. From all of us at Mayhew, thank you and Merry Christmas.
Find out more! https://t.co/5o2RHLveRM pic.twitter.com/uBV19F6Odt 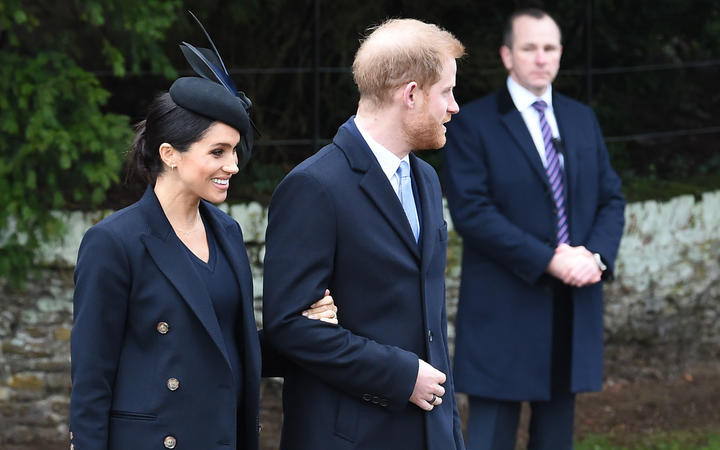 Meanwhile, the Prince of Wales and Duchess of Cornwall have confirmed they’ll spend the December 25 at their estate in Gloucestershire.

It is also understood that some family members will visit the Queen and Prince Phillip over the holidays, though not much is known about who will make the list and where they will visit.

The Royal family usually spends Christmas at the Queen’s private estate in Sandringham.

And it wouldn’t be a Royal event without its rules and traditions – including a process for how guests are supposed to arrive on Christmas Eve. 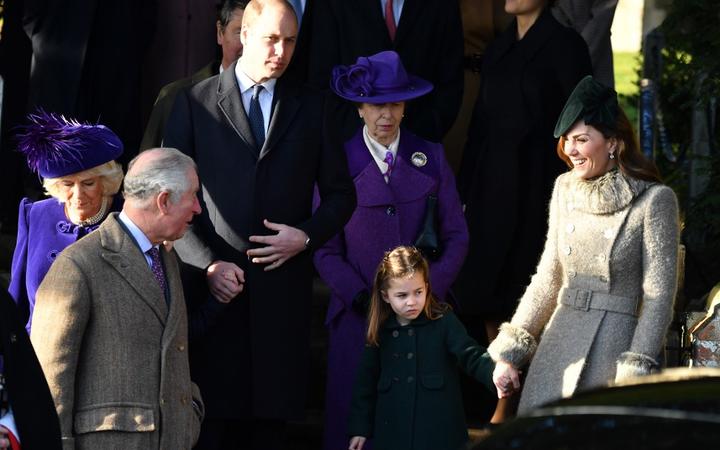 Prince Charles and the Duchess of Cornwall are spending Christmas in Gloucestershire without the rest of the royal clan. (file pic)
Photo: AFP

The idea is that the family appears in reverse order of succession – so Princess Beatrice is not allowed to get there after her cousin, Prince William.

That would be considered rude.

The idea is that they all meet at the estate on Christmas Eve for an afternoon tea and finish decorating their six-metre-high tree.

It’s typically adorned with regal-themed baubles – including mini crowns, a golden throne, a piper wearing a kilt, and mini corgis.

Gifts are also exchanged the day before Christmas in a nod to the Windsor family’s German heritage. They are meant to be simple or funny, rather than extravagant.

Catherine, the Duchess of Cambridge, for instance, gave the Queen handmade chutney at her first Christmas with the Royals.

“I was slightly worried about it, but I noticed the next day that it was on the table,” the Duchess of Cambridge said in a documentary made in honour of the Queen’s 90th birthday.

“I think such a simple gesture went such a long way for me.” 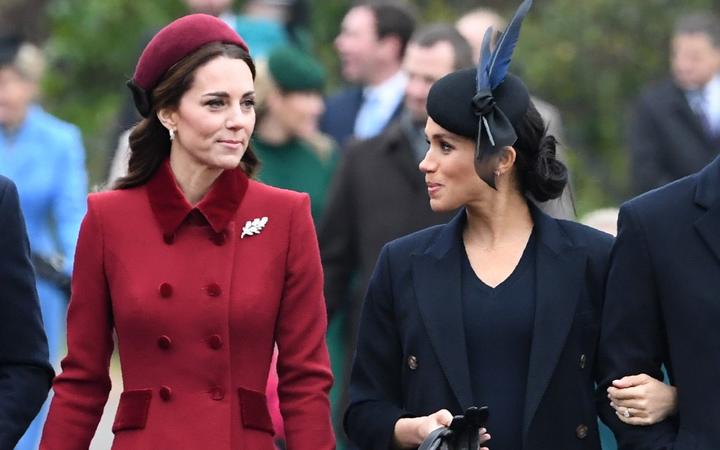 Catherine, Duchess of Cambridge, left, talks to Meghan, Duchess of Sussex as they arrive for the Royal Family’s traditional Christmas Day service at St Mary Magdalene Church in Sandringham, Norfolk, in 2018.
Photo: AFP

Outfit for every occasion

Christmas with the Royals at Sandringham can require five to seven outfit changes a day, including black-tie options for the evening.

The Queen’s personal dresser Angela Kelly recently wrote a book about the mammoth efforts required to style a monarch.

She says during the festive season, the Queen “is just as busy as she would be in London, with more guests to entertain”.

In the latest season of The Crown, the black tie dinner for Christmas 1990 serves as the dramatic crescendo of the series, with Diana donning a daring backless halter dress as she makes a key realisation about her place within the Royal family.

But perhaps the most important and visible sartorial choice for the Royals is what they wear to St Mary Magdalene church on Christmas morning.

Kelly says she always gives the Queen’s guests a heads up about which colour she has decided to wear for the stroll into the church.

“When it comes to the Royal Family, it doesn’t matter if they wear the same colour as the Queen because they are family,” she explains.

“Other guests though, feel they shouldn’t be in the same colour as Her Majesty, although the Queen would not mind if this did happen.” 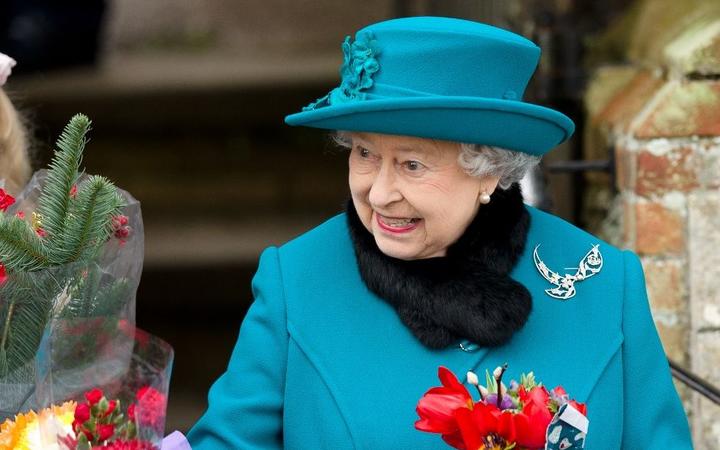 The Queen makes a colour statement at Christmas, as with the outfit she wore on Christmas Day in 2012.
Photo: AFP

The Royal family has adopted new traditions in the past.

During the ’60s, when the Queen’s children were small, the family used to celebrate Christmas at Windsor Castle.

But when the castle was being rewired in 1988, the family went to Sandringham and have continued to go there for the holiday ever since, according to the Royal family’s website.

The official word has been that this year will hopefully be the only time that plans change.

“Like everyone they hope things will get back to normal in 2021,” a palace spokesperson said.