Home  ⁄  Article  ⁄  Christmas in isolation: a picture of good cheer for hotel dwellers
Dec 24, 2020 Posted by nzuser In Article Comments 0

Almost 6000 people are spending Christmas in a managed isolation facility. 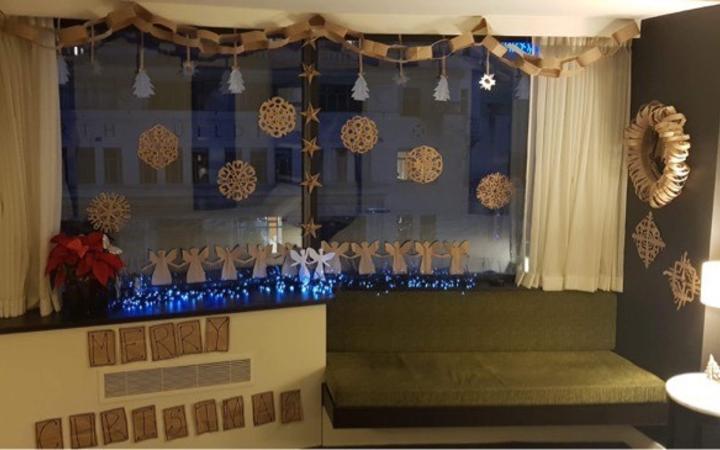 Some of the 32 hotels are running Christmas-themed competitions, or delivering special lunches of turkey and ham.

A two-week stay in a heavily-guarded hotel room with daily medical checks and strict movement rules isn’t the traditional image of the nativity.

Jen Pitch is one of the approximately 5800 people who will be spending Christmas in managed isolation.

“It was hard when we were planning to come here,” she said.

“But once we got over the initial feelings of, ‘Oh no!’, we were just like: at the end of the day, 2020 has been an absolute write off.

“So what’s another couple of holidays that we can’t really have fun in?”

She arrived in Auckland from Melbourne on Saturday, and is not scheduled to leave until early January.

“Usually, I’m someone who is super passionate about Christmas. But this year, I just decided to do the bare minimum.

“I could have – and I was thinking about – going a bit crazy with decorations in the hotel room.

“But then I was like, we’ve got four months of stuff that we want to bring over, so I need to keep the decorations to a minimum.”

The Grand Millennium Hotel, which is being used as a managed isolation facility, in Auckland CBD.
Photo: RNZ / Dan Cook

Yesterday, she said all the guests at the Grand Millennium were given a craft pack for a competition to see who can make the best window decorations.

Ahead of that curve, is Margaret O’Connoll, who has been creating a decoration every day since she began her isolation, out of the brown paper bags the food is delivered in.

“I’ve got angels along the bottom of my window, then I have some snowflakes.

“Then I have some origami stars. I made a wreath. Then I did an origami nativity set, and my Christmas tree.”

It all comes down to how she feels about this time of year.

“I’m one of those crazy people who loves Christmas. I decided that I wasn’t going to miss out this year.”

O’Connoll is one of the few hundred who will be given the added gift of being able to leave on Christmas Day, as their two-week isolation comes to an end.

She will be flying straight down to Wellington to be with her mother, after her father passed away last month.

“This is the earliest I’ve been able to get over here. [I was] so excited when I got the MIQ date for the 11th, which is quite tricky, getting an MIQ voucher, so I felt like I’d won the lottery.”

Kyle Chapman is another spending Christmas in isolation alone.

He’ll be reunited with his boyfriend – who he hasn’t seen for nine months – in Wellington, on New Year’s Eve.

“[I’m] not exactly sure where [to spend it], but we’re probably going to go to a party, and have a few drinks.

“Not really too fazed about where it’s going to be just as long as we’re together.”

For the MIQ staff, it remains business as usual over Christmas.

But managed isolation and quarantine facilities deputy secretary Megan Main said that had not stopped some of the hotels getting involved with the festive spirit.

“I know [at] some facilities, the staff have donated gifts for secret Santa for children.

“We’ve got a facility where local children have written Christmas cards.

“One of our facilities has stockings on their doors. Cookies for children on Christmas eve, special lunches, pavlova of course.”

She said health and safety precautions would remain the top priority, and people would still be swabbed, and all the health checks would continue.