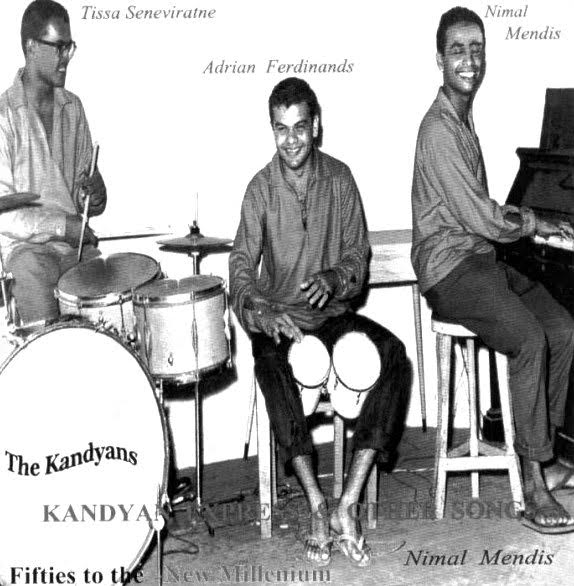 Nimal Mendis (1934–2015) was a Sri Lankan singer and songwriter, and was one of a handful of Sri Lankan musicians to appear on the BBC television programme Top of the Pops (1968). Mendis was a longstanding member of the Performing Rights Society and the Mechanical Copyright Protection Society of Great Britain.

Mendis was discovered in the late 1950s by Radio Ceylon, which dominated the airwaves in South Asia in the era. The station backed Mendis’ songs from the outset, including “Kandyan Express”, turning them into hits in South Asia: so much so that listeners from all over the Indian sub-continent wrote in to Radio Ceylon requesting his songs.[1]

Mendis had been involved with music from his early childhood, and has lived for many years in London travelling often to Sri Lanka. He has also lived at Le Paradis in the Charente, the South West of France, for five years with his wife Ranjani. Mendis was married to Ranjani for 33 years until her death in 2010, and has one son, Paulmarie, with whom Mendis ran Mediaeye Productions.

Mendis has 22 songs published in Britain and has written music for films in Sri Lanka. “Kiss Kiss Kiss” was Mendis’s first song that was recorded in Britain and sung by Mary Marshall on the Columbia label. “Kandyan Express”, “Cherry Blossom Tree”, “Oh My Lover”, “Butterfly in the Rain”, “Champagne Blues”, and “Goodnight Kisses “‘ were number-one hits in Sri Lanka in the late fifties.

“Kandyan Dance”, an instrumental, was his second piece in the West. Recorded by Friedel Berlipp and his Orchestra in Germany it went on to be number two on Radio Luxembourg. It was also released in the United States. Black Pearls & Green Diamonds has eight of Mendis’s songs on an LP for Decca by One Two and Three, a folk group in Britain. This album is now a collector’s item.

Mendis appeared on the popular BBC television music programme Top of the Pops with his singing partner Sandra Edema in 1968 as guest artists with his song “Feel like a Clown”. The B-side of the record “Rainbow Land” was the A-side in the States and today (2013), it has become a collector’s item in the Psychedelic Rock community in the west. They were also featured with the song on Beat Club in Germany that year. Eugene Wright, bass player with the original Dave Brubeck Quartet, arranged and recorded five of Mendis’s songs with only him playing bass. He also arranged and produced one other song, “Singing Fish”, with electric guitar, bass, and piano. They were sung by Sandra Edema.

This Classic instrumental “Moon over Asia” was composed by Nimal Mendis for Harold Seneviratne Combo in 1958 when Nimal returned from UK to Sri Lanka. I remember well I was studying at St Peters Collage and livening down Milagiriya Avenue Bambalapitiya two houses down from Nimal’s house remember all the musicians gathering at his house and jamming, practising and rehearsing among them were Cliff Foenander, Sandra Edema, Jay Brothers, Tissa Senevirarne, and Adrian Ferdinands.  Some of the songs composed by him were “Butterfly in the rain” “Lifelong Romance” ‘Way back when “for Cliff “Oh my lover” for Sandra, “Cherry blossom tree” and “Goodnight Kisses” for Jay Brothers and “Kandyan Express” by the Kandyans. His first song composed and recorded in UK was “Kisses in the Dark” vocal by Mary Marshall.

Check the link below. Please Enjoy

Kandyan Express” by the Kandyans

Cliff Founander Butterfly in the rain

Cliff Foenander – Way back when