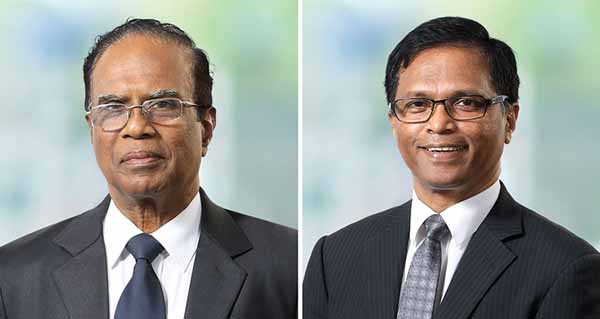 The Commercial Bank of Ceylon PLC has announced the appointment of former Chief Justice Kanagasabapathy Sripavan as Chairman and senior academic Prof. A. K. W. Jayawardane as Deputy Chairman with effect from 21st and 29th December 2020 respectively.

Justice Sripavan and Prof. Jayawardane succeed Messrs. Dharma Dheerasinghe and Preethi Jayawardena, who retire from the positions of Chairman and Deputy Chairman of Sri Lanka’s benchmark private bank after completing their tenures.

The first Sri Lankan Bank to be listed among the Top 1000 Banks of the World and the only Sri Lankan bank to be so listed for ten years consecutively, Commercial Bank, which won more than 50 international and local awards in 2019, operates a network of 268 branches and 880 ATMs in Sri Lanka.

Commercial Bank’s overseas operations encompass Bangladesh, where the Bank operates 19 outlets; Myanmar, where it has a Microfinance company in Nay Pyi Taw; and the Maldives, where the Bank has a fully-fledged Tier I Bank with a majority stake.