Home  ⁄  Article  ⁄  Irwin Howie was one of the finest fly halves-by Hafiz Marikar
Dec 20, 2020 Posted by nzuser In Article Comments 0 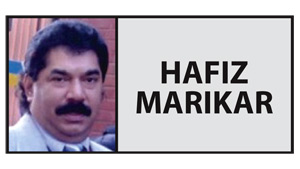 Having started his career as a scrum half, Irwin Howie developed into one of the finest fly halves in the history of Kandy and Sri Lanka rugby with a reputation as an elusive runner and the playmaker of the backline. He is the man who steered Kandy Sports Club to the Cup final under his leadership after nine long years in 1978 where they lost to Havelock SC under Anton Benedict by 4-10

Irwin Howie was a dynamic and cheerful rugby player.Fans in the late 1960s and 1970s were amazed at the brilliant performances Irwin produced. He started rugby at Trinity College and played in all age groups.He started as a scrum-half at the age of 15 and ended as one of the best fly halves.. At senior level, he was well known for his kicking. He used to score through drop goals from any angle and was also good in punts and cross kicks. Irwin first played for Trinity College senior side under Shafie Jainudeen in 1969, the year Trinity won both the Bradby games 8-0 and 9-3. The team was made up of Y.S. Ping, H.C. Gunasekera, Mohan Samarakoon, K.R.Tennekoon, Anura Madawala, Iswan Omar, R.G. Panabokke, Shanthi Kumar, Tikiri Marambe, Irwin Howie, P. Nugawela, Palitha Sam Samarasekara, Nihal Marambe, F.Prins and Shafie Jainudeen. In 1970,Irwin played under Palitha Sam Samarasekara. That year too, both Bradby games were won by Trinity College 19-3 and 16-12. In 1971, Irwin played under Y.S.Ping and some of the players in that side were Nihal Marambe, C Wadugodapitiya,Niroshan de Silva, Lalith Ramanayake and Jeffrey Yu. That year there was only‘one-leg’ of the Bradby Shield due to JVP insurgency when Royal College won by 22 points to nil. He won his Colours in1969 along with H.C. Gunasekara, Tikiri Marambe, R..G. Panabokke, Y.S. Ping,Mohan Samarakoon and E.R. Tennakoon and the ‘Rugby Lion’ in 1971 with Tikiri Marambe and Y.S. Ping. He also played cricket, mainly in the ‘A’ team and was a superb close in fielder.

Howie was a regular member of the Outstation Schools and combined schools team. While in school he played for Dickoya MCC, at that time his father was planting close to Dickoya and gave off his best.

Seeing his ability, CH &FC hooked him to Maitland Crescent and after a short stay, he crossed over to CR & FC and played for three years and helped the club to emerge unbeaten A division League champions in 1973 and 1974 with his knowledgeable play. Then in 1975, when E.W. Balasuirya was the president of Kandy SC, M.E. Marikar(EW’s good friend), arranged Irwin’s arrival back to Kandy, where he played and enjoyed his rugby. He first played in 1975 under Iswan Omar, 1976 under Jadi Dissanayake, 1977 under Sunil Munasinghe and 1978 and ‘79 were his years of captaincy.

Due to his superb performances as a player and leader, got the break to lead the country in the year 1978 at the Rugby Asiad held in Malaysia, and had three Kandy SC players with him in that team —D.H. Rajaguru, Sunil Munasinghe and Nimal Malagamuwa.

He also led the Up-Country team in the same year in the Capper Cup.

Then in the following year 1979 also led the Kandy SportsClub side which was almost the same side as the previous year. Irwin Howie was a master planner of the game of rugby — especially for the Nittawela club and took them to the top. Irwin was a polished player, he could catch the ball from any angle, his style of play was excellent, and his dummying, scissor pass and reverse pass were superb.

Today we very rarely see a pass of Irwin’s style. What he wanted was the ball, with the ball in hand he knew exactly what to do. He then took to coaching and he coached St. Anthony’s College.

Thereafter he was invited to take over Trinity College rugby coaching and also coached Dharmaraja College.

He is now living in Australia with his wife Yvette, son Miles, daughter Rosemary and grand children.