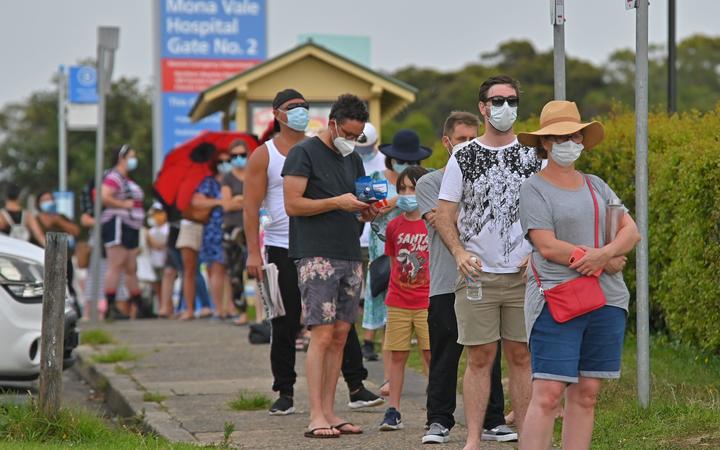 People line up for a Covid-19 coronavirus testing at Mona Vale Hospital in Sydney.
Photo: AFP

The New South Wales Premier, Gladys Berejiklian, says while the number are higher than yesterday, a positive is that officials haven’t seen evidence of the virus spreading significantly outside the Northern Beaches.

Everyone in the Greater Sydney area, including the Blue Mountains and Central Coast, is now asked to have no more than 10 people in their homes until Wednesday.

From today, the neighbouring state of Queensland is requiring arrivals to have a border pass and get tested for the coronavirus.

Tasmania requires anyone coming from the state to spend 14 days in quarantine – but anyone who has been in Sydney’s Northern Beaches is banned.

Western Australia is reimposing its hard border, so no-one can travel there from New South Wales.

WA’s Premier Mark McGowan said while he regrets having to take the step less than a week before Christmas, the risk of Covid-19 emerging in the community is too high.

“I know these changes are going to be hard to take for many people,” McGowan said at a press conference last night.

“I know it will throw Christmas and reunion plans into disarray if it hasn’t already.

“These are now extraordinary circumstances.

“I wish I didn’t have to be making this announcement but as Premier I have a responsibility for every Western Australian and I need to do what is right to keep our state safe and strong.”

McGowan said it was not known how long the border would stay up. 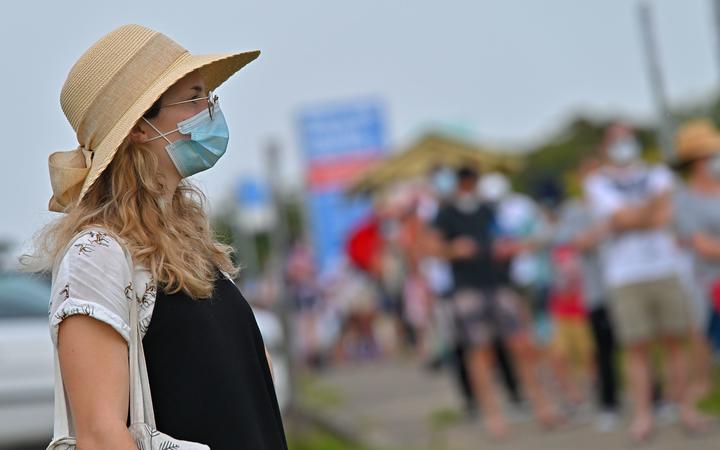 A woman waiting for a Covid-19 test at Mona Vale Hospital in Sydney.
Photo: AFP

“We hope it’s only for a short period and we can reassess our border controls when the health advice says it’s ok to do so,” he said.

“As previously stated, a travel bubble won’t start until the first quarter of 2021,” a government spokesperson said in a statement.

“Commencement is dependent on no significant change in the circumstances of either country.

“Decisions on whether or not to proceed with a travel bubble will occur in the new year and we will assess the situation at that point.

“We’re monitoring the situation closely, but it’s too early to make any decisions based on the current community cases in New South Wales.” 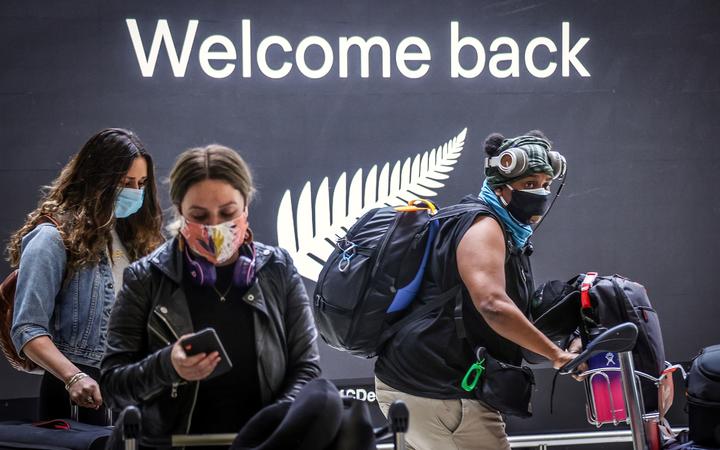 In a statement released this afternoon, Ministry of Health officials said they are closely monitoring the situation in New South Wales and are in regular contact with Australian officials.

“Officials in New Zealand have already increased public health and testing measures relating to aircrews to further strengthen our country’s defence against Covid-19.

“Among the measures, overseas-based air crew are required to stay in a managed isolation facility for the duration of their layover while in New Zealand.”

McGowan said very few people would be eligible for an exemption to travel from New South Wales to Western Australia.

However, some may be granted entry on compassionate grounds, including people who had travelled to NSW recently and needed to come home.

“But imagine us having to shutdown Perth or Margaret River or Bunbury or Broome over Christmas.

Some senior government officials, active military personnel and truck drivers are among those who will still be able to travel between the two states.

All 68 people who had been in the Sydney Northern Beaches area before travelling to WA have tested negative for the virus.

The announcement comes just hours after the WA Health Minister Roger Cook held a media conference painting a much more positive picture of the border situation.

“At this stage we don’t, at this point in time, see the need to go further than the current arrangements we have,” Cook told a midday press briefing.

However, he acknowledged the situation was unpredictable and “could change at any time”.

The hard border replaces the arrangement in place since Thursday requiring travellers from NSW to self-isolate upon arrival in WA.

WA recorded one new Covid-19 case overnight – a man in his 30s who had arrived from overseas and remains in hotel quarantine.

It’s been 252 days since community transmission in WA.