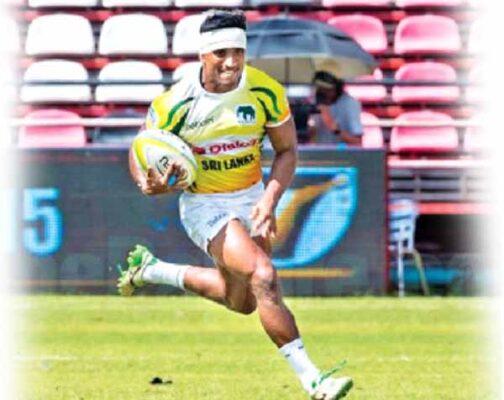 Anuruddha Wilwara, the International Rugby Player started his Rugby career at Vidyartha College,Kandy under the coaching of Piyal Navaratne who taught him the basics of the game. When he showed his talent in rugby he was awarded a Scholarship by S.Thomas’College, Mount.Lavinia in 2006 and his Rugby career blossomed out to such an extent at the new School as he was selected to the Under 19 National Rugby Team in 2009 and 2010.

When playing in the school he won the Thomian Blue in Rugby and he was the first Thomian to receive this prestigious award. Anuruddha got the Captaincy of the School Rugby Sevens team and became the Secretary of the 15-a-side team. He was awarded the Best Sportsman and the Best Ruggerite awards in the School in 2010. He helped the School to become All Island Rugby Sevens Champions and Runners-up at the 15-a-side All Island Rugby tournament in 2009.

He was also an outstanding Athlete who won 100 and 200 metre races and finished 100 metre. race in 11 Sec. and he won these two events at the Zonal Meet too. He was coached by M.Chaminda of the School and his Athletic ability definitely helped him in playing rugby to become one of the Fastest Wingers in the Country.

. In the meantime he represented KandySC in 2010 and also Havelocks SC in 2011 and 2012 and as he had to prepare for the GCE(OL) exam he had to be in Colombo and he was unable to travel to Kandy to continue rugby practices and joined the Havelocks SC.After his school career he joined Kandy SC again in 2013 and has remained there as a rugby player to-date.

From the start, Anuruddha was more interested in playing 7-a-side rugby and he led the North Central Typhoons to become Champions at the Carlton Sevens in 2014 and he took another step forward in his illustrious Rugby career to win the most Outstanding Player award at the Mercantile Sevens representing MAS Holding in 2014.

Anuruddha has many outstanding performances such as becoming the highest Scorer with over 20 tries in the Rugby Sevens at the Asian Tournaments and he was named as the Best Back Line Player in the Club League tournaments way back in 2011.

He is thankful to his coaches, Piyal Nawaratne,Mothilal Jayathillake, Jeewan Gunathilake and to the Thomian Sub Warden, Harshana Perera, Malik Samarawickrema, Asanga Seneviratne, Sean Wijesinghe and the present Rugby Coach of Kandy SC Farzil Marija and his family members.