On Day One you steep the fruit in spices and brandy and five days later you mix in the other ingredients and bake it for an hour and half.

Here’s what you need to start:

100 grams each of roughly chopped:

The fruit will expand by almost 100% during steeping, so choose a large bowl to add all the ingredients together with:

Grind to a fine powder with a mortar and pestel or coffee grinder (There should be a little more than required for the recipe, keep this allspice mix airtight for another recipe. By the way, a teaspoon of ground cinnamon weighs 2.6 g).

Mix all indredients well, seal tightly with plastic wrap, wrap in a tea towel and leave to steep at room temperature for 5 days.

Beat the sugar and butter to a creamy consistency and add egg yolks one by one, then add the lime and essences.

Mix the semolina into the steeped fruit

Pour the butter/egg/sugar mix into the fruit and fold through well.

Fold in the egg whites at the last moment, being careful not to mix more than necessary

Pour into the cake tin, bake in the middle of the oven for 1hr 30 minutes and test with a skewer.

Note: I added in a good extra slurp of brandy at this stage, and found that the extra moisture required another 20 minutes in the oven … the butcher’s paper lining ensured that the cake wasn’t a bit overcooked.

Cool completely before turning onto a rack.

I’ve decorated mine with mangrove flower sepals from the lagoon here, studded with Sri Lankan cloves, and I store in the refrigerator for easier slicing.

Well, finally feeling festive, and celebrating with a nip of ‘Rosetto’, a spiced wine also full of cloves and cinnamon, made by the Rosarian Sisters from the little convent I visited a few weeks ago in Jaffna, at the nothern most tip of the island … but that’s another story. 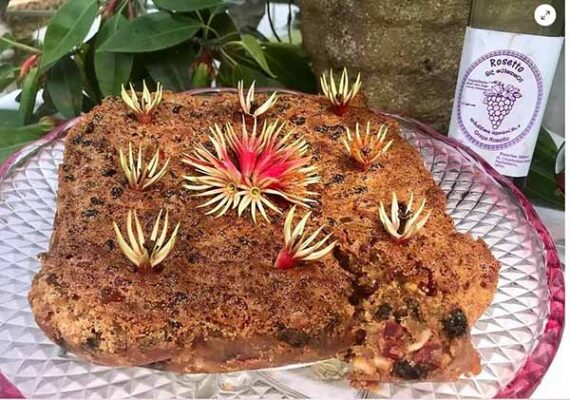 P.S. The first part of this story of cinnamon is here.

I’ve discovered a company here in Sri Lanka who grows their own spices and exports around the world to individuals – lovely people to talk to, easily to communicate with and very responsive – ask for Mr Chandran who started the company and is passionate about spices!

My next recipe story will be ablout the different grades of Cinnamon – there are 4 – and Cinnamon Alba, which is my next culinary advenure, is the cosliest and most refind of all, so I’m looking forward to cooking with that and sharing the story.