Hundreds of defence force workers were exposed to ‘critical incidents’ that required psychological check-ups after working in Managed Isolation and Quarantine. 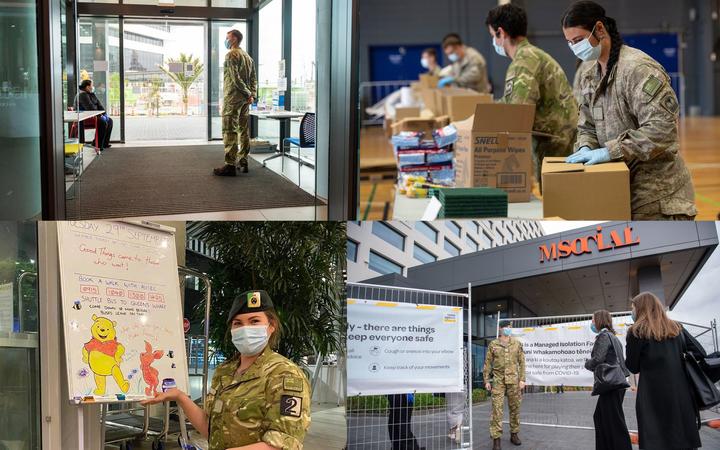 The NZ Defence Force has been called in to help with many areas of the government’s Covid response, including at the country’s managed isolation facilities.
Photo: Supplied / NZDF

Almost 2000 staff from the NZ Defence Force who worked on Operation Protect were questioned to see what impact it had on their well-being, and the documents were obtained by RNZ under the Official Information Act.

Two surveys were carried out: a Critical Incident Exposure Questionnaire, and the Managed Isolation and Quarantine Facilities Exit Well-being Questionnaire.

Staff were asked if people in isolation and quarantine facilites had been argumentative or abusive towards them, if there’d been significant interactions with media, if they’d been asked to removed a body or remains from the site, what their mood was during the operation, if there’d been any impact to their families, and if the operation had affected their plans to remain in the Defence Force.

From one set of 1718 personnel who had or currently worked within the facilities, 246 of them said they’d seen something that required a check in with the Defence Force psychology team, and another 22 asked for a psychologist’s help.

Of the set of 1718, 15.6 percent said they’d experienced challenging situations while doing the job.

From those who responded to the Well-being Questionnaire, almost 10 percent met Defence’s threshold for support. And 161 of that group scored at a level where the Defence Force felt psychological support or a check-in was warranted.

A further 18 people asked for a psychologist to contact them to discuss their response or the experience.

“These figures are similar to the average for operation debriefs; 15 percent of deployed personnel require additional follow-up.”

Woods said that by 20 November, 13 people had decided to leave the Defence Force from the first cycle of 427 staff who were assigned to Operation Protect, including four who had already left.

However, the Defence Force said drawing a direct link between the decision to leave and their service in Operation Protect would be unsound.