While Womad has pulled the plug because of Covid, New Plymouth’s famous Festival of the Lights has overcome the challenges of the pandemic to put on a show. 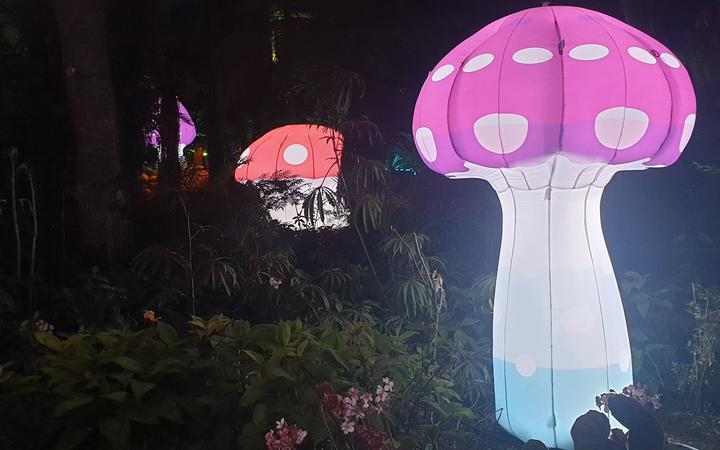 This year, 15 new installations with intriguing names such as Shrooms, UV Spaghetti and Hybycozo, will compete for attention alongside a busy music programme – a feature of the free council-run event since the 1970s.

From humble beginnings in 1953 when the Poet’s Bridge in Pukekura Park was lit up to celebrate Queen Elizabeth’s coronation, the TSB Festival of Lights has grown into an event spanning 50 days and nights. 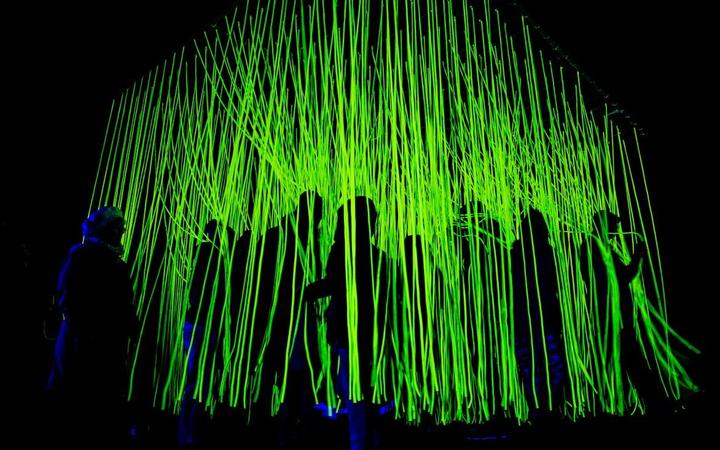 One of the installations, UV Spaghetti.
Photo: Supplied / Festival of the Lights

But it hasn’t been plain sailing this year with Covid meaning international artists have been unable to get into the country and organisers have had to deal with the vagaries of overseas shipping.

Lighting and operations manager Fraser Ross said if anything, that had brought people closer together.

“We have got a few international pieces this year and the artists have been really prepared to let the lighting team install them.

“You know getting an artist sending over their work and getting a local team to install them is a scary thought, but we’ve built that trust.” 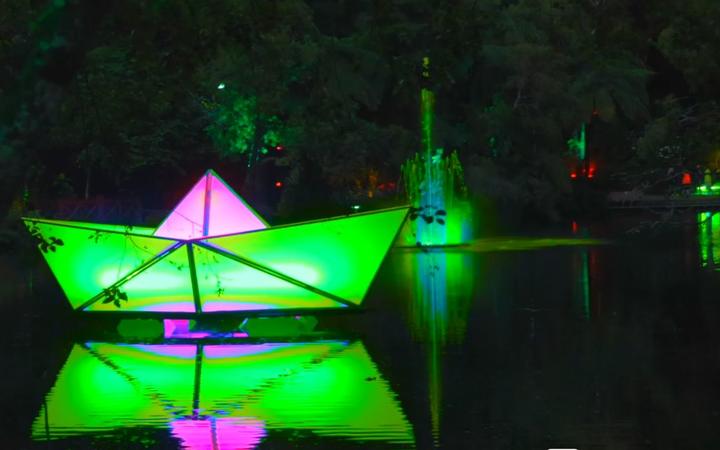 His favourite such piece was by Renzo B Larriviere and Zara Pasfield of Peru and Australia respectively.

“So they’ve created the Lilly Pad piece for us this year and some monkeys, which ties into the zoo, so they’ve made those out of polypropylene.

“It’s all recyclable and they are lit with LEDs and they look a million bucks, so that’s been a highlight working with them and them building something new.” 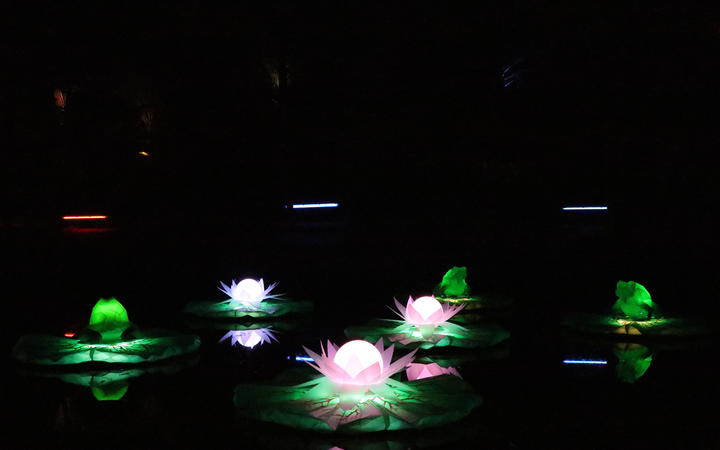 Lilly Pad by Renzo B Larriviere and Zara Pasfield of Peru and Australia respectively.
Photo: Supplied / Festival of the Lights 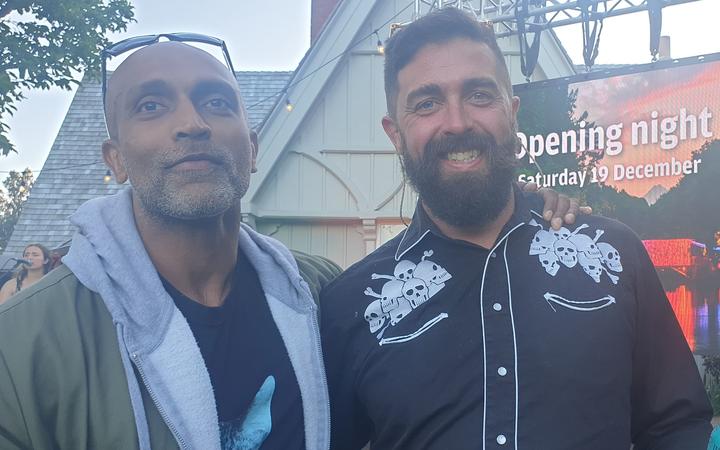 Bright and colourful – these larger than life fungi evoke Alice in Wonderland and will have young and old venturing into the rabbit hole that is the Sunken Dell.

“Yeah, Simone Chua is the lead creative at Amigo Amigo and she really doesn’t let anything get in the way of creating things big and beautiful and playful.

“And the mushrooms are just one of her many many creations that tour around the world.”

Van Dorsten also has his own piece on display – Full Spectrum – a tunnel of seven hexagonal light sculptures that celebrate unity and diversity in nature and humanity. 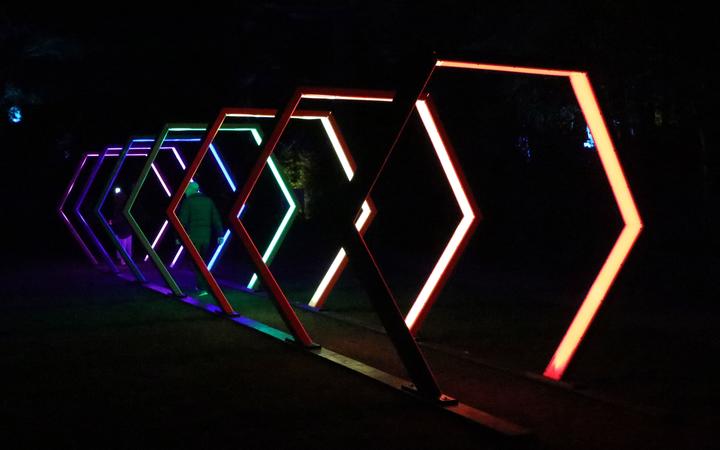 She said an upside of Covid was that so many quality New Zealand acts were in the country which was reflected in the Hatchery Lawn line-up.

“We’ve got some great headline acts including Sola Rosa on New Year’s Eve, Reb Fountain, who was a Womad favourite. We also have the Warratahs, which is an amazing country family favourite, kicking off on the 19th Saturday.

“And also 50 percent of the entertainment is local performers so we mix it up. Out of towners, locals and the locals get experience playing alongside more established artists.” 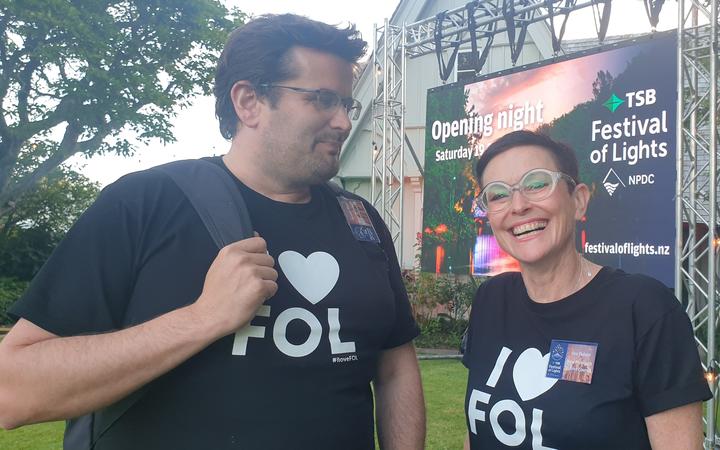 Ekdahl said the music programme had become an integral part of the festival.

“I think it brings people together. People who might not normally pay to go to a gig might come along and get a taste for it and go ‘actually this is really fabulous, I love it, love the atmosphere. I can come here with my family bring a picnic and BYO’ and just connect with people and feel good.”

And you wouldn’t get any argument on that front from local Alessandra Keighley.

“The Festival of Lights I think is worthy of study. What it must do for social cohesion and community connectedness is phenomenal,” Keighley said. 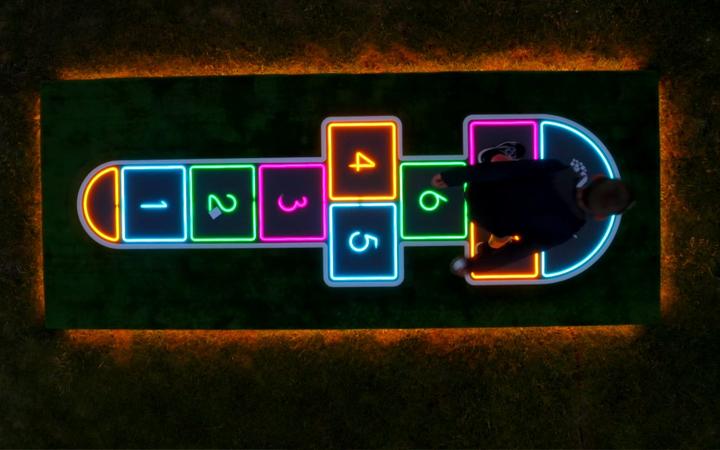 The light installations were a secondary consideration for Keighley.

“Oh yes but they’re not necessarily the biggest thing for me because live music is my drug of choice and so I love that I get to be with my community dancing.”

The Festival of the Lights attracts more than 100,000 visitors each year and a 2017 economic impact report found it pumped just under $5 million into the local economy, a figure organisers said would have only grown since.

The switch on the 2020 / 2021 edition will be flicked tomorrow at 8.30pm coinciding with the Waratahs’ appearance on the Hatchery Lawn stage.

The festival wraps up on 31 January. 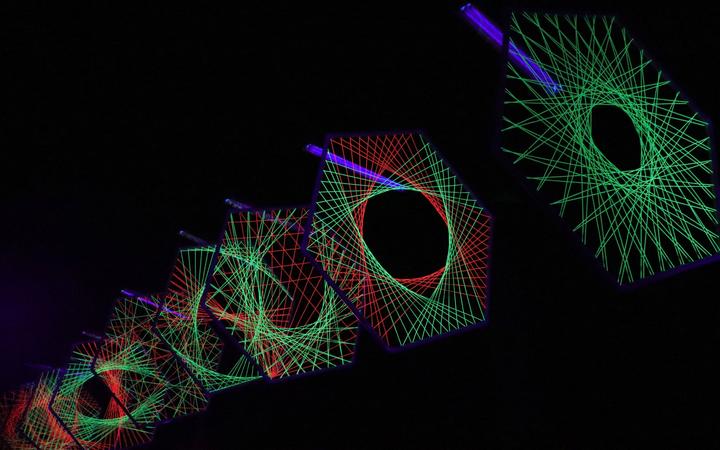 Photo: Supplied / Festival of the Lights