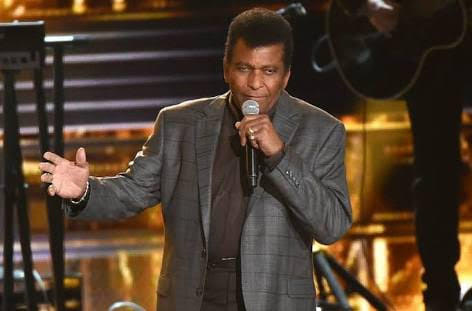 Charlie Frank Pride who held sway in the early 1960’s to mid-1970’s; continuing into the 1980’s & beyond, passed away unexpectedly & tragically from the insidious ravages of COVID-19 on December 12.2020 in Dallas, Texas USA.

He was 86 years young at the time of his demise. He is survived by his wife Rozene (1956-2020) his children Dion Pride, Angela Pride & Kraig Pride; to all of whom we offer our heartfelt condolences. Charlie was an American singer, musician, guitarist & professional baseball player, who was born in Sledge, Mississippi USA. But more importantly, he was a dyed-in-the wool performer, who lived & breathed the intoxicating fragrance, of what many dubbed the elixir of life  Conspicuous among his multitude of chart toppers, was the collective cream of the crop, vis-a-vis “Kiss an angel good morning, Is anybody going to San Antone, All I have to offer you is me, Crystal Chandeliers, The snakes crawl at night, Kaw-Liga, Before I met you, I know one, Mountains of love & I’m afraid of losing you”.

At the pinnacle of fame, Charlie released 52 top ten hits in the Billboard Hot Country Songs Chart; 30 of which secured a Number One slot. He also bagged the “Entertainer of the Year Award” at the Country Music Awards in 1971 & was richly rewarded with an enviable induction into the “Country Music Hall of Fame” back in 2000. Charlie held the unique distinction in becoming only one of three African-American artistes besides Deford Bailey & Darius Rucker; in been accepted as a member of the Grand Ole Opry, an exclusive honour reserved for performers of excellence. During his sterling career, Charlie Pride was the toast of the music industry, in addition to having been one of it’s linchpins.

He was modest, gracious & always willing to help those, aspiring to carve out a niche for themselves. Many wannabees smoothened their rough edges under the tutelage of Charlie, whom many music critics opined was the epitome of perfection. But Charlie was often known to have brushed off that tag politely, by saying that he was just another cog in the industry’s gigantic wheel & there were others who happened to be streets ahead of him.

Such was his humility. He was much sought-after. And Charlie never disappointed when he was called upon to deliver qualitative music in his velvety, mesmerising drawl; that set him apart from the rest of his peers. Country sweetheart Dolly Parton, who did a duet with Charlie on ” God’s colouring book”, said thus: I’m heartbroken that one of my dearest & greatest friends has passed away”. It was only last month when Charlie Pride a three time Grammy winner, was honoured by the Country Music Association, with the Willie Nelson Lifetime Achievement Award. The passing of Charlie Pride brings down the final curtain, as it has done many times before; on arguably one of the best, who not only collaborated with some of the most versatile & fairest, but one who placed his indelible footprint on the industry’s hallowed turf. Thank you for the music & memories Charlie Pride.

Needless to say, you were everybody’s darling. May you rest in Paradise!