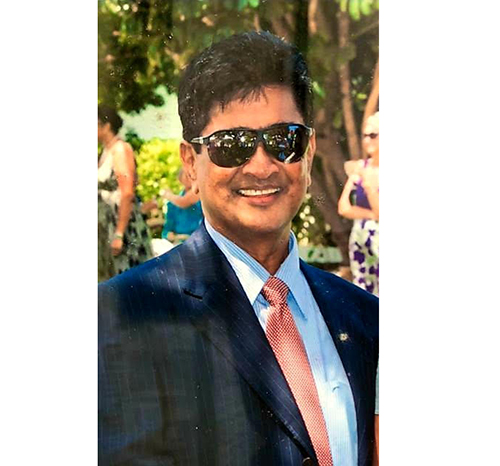 A team of doctors led by Dr. Sarath de Alwis Seneviratne, Associate Professor/Senior Consultant, at CTMH, The Doctors Hospital in the Cayman Islands, recently removed a giant tumour from the uterus of a patient – the largest seen on the Cayman Islands and perhaps the world. Seneviratne was assisted by surgeons Dr Steve Tomlinson, F.R.C.S., L.R.C.P and Dr Chris Bromley, F.R.C.S. (Eng.), F.R.C.S. (Edin.).

A team of doctors led by Dr. Sarath Seneviratne (STC CRICKET & SPORTS FAME), Associate Professor/Senior Consultant, at CTMH The Doctors Hospital in the Cayman Islands, recently removed a giant tumour from the uterus of a patient, which was easily one of the largest tumours the doctors had ever removed, weighing in at 21 pounds 2 ounces. This was very likely the largest tumour ever seen by surgeons in the Cayman Islands and one of the largest ever seen in the world with a successful outcome. The team of medical professionals who successfully removed the tumour was led by Dr. Sarath, assisted by surgeons Dr Steve Tomlinson, FRCS, LRCP and Dr Chris Bromley, FRCS. (Eng.) and (Edin).

“The patient was presented with an abdominal mass extending to the chest and extending under the liver. She was in considerable pain and discomfort, particularly in the back, having undergone surgery previously in London “. Dr Sarath Seneviratne said. “She needed the mass to come out.”

It was anticipated that the surgery would take three hours and present challenges, given the size of the mass. Therefore Seneviratne enlisted the assistance of Drs. Tomlinson and Bromley, along with a team of experienced nurses experienced in working together as a surgical team. The approach was to ensure every measure was taken to keep the patient safe, the doctor advised.

“We anticipated difficult surgery and considerable bleeding,” Seneviratne said. “The anesthetist, Dr Stephen Gay, put in an arterial line rather than the usual venous line to help control the bleeding, as many patients have died under similar circumstances through uncontrollable blood loss, renal failure and sometimes other complications such as a coagulopathy or multiple organ failure.”

The mass was under the diaphragm and pressing against the liver, aorta and kidneys and it had gone into the pelvis; so much so that the pelvic structures could not be seen from below. The abdominal wall was enlarged vertically as well as transversely, that it looked like triplets. The lady had hypertension and weighed over 300 pounds, which added to the risks for anesthesia and surgery.

The size of the mass and intra-abdominal adhesions was the biggest difficulty, because the tumour had attached itself to various parts of the patient’s internal organs, including the small bowel, rectum, bladder and pelvic wall, hence increasing the risk of bleeding.

During the surgery, she was bleeding profusely from all sides of the tumour, especially from behind the mass. Hemostatic clamps and large warm packs were used to control the hemorrhage, while meticulously ligating the vessels.

“We had to stick to basic principles of surgery, we couldn’t do any fancy stuff,” Seneviratne said. “The basic principles are: a) you have to stop the bleeding and b) approach the tumour in such a way that she won’t bleed. Those are the two cardinal things.”

The doctors then had to move quickly to remove the mass, trying to remove it in one piece so it could be examined histologically as a whole, to look for malignancies. They kept the tumour in a large bucket before it was flown to the US to be examined. They managed to save one ovary and the patient went home three days later in good health.

“It was considered one of the biggest tumours in the world, most likely the largest ever in the Cayman Islands,” Seneviratne said.

Assisting surgeon Dr Christopher Bromley said that he had looked at the size of the patient’s stomach with some concern before they began to operate. “I could see it was going to be a substantial operation,” he confirmed.

Bromley said that the operation began smoothly and continued so with Seneviratne performing the surgery “extremely expertly”. However, when they uncovered the tumour he said he was “truly over- awed” at its size.

“It went way beyond my experience, probably the largest I had ever seen,” he said.

“It was the largest uterine fibroid that I had ever seen,” assisting surgeon Dr. Steve Tomlinson confirmed. “The surgery went like clockwork and did not take that long considering the amount of work that had to be done, especially when you consider that a normal hysterectomy takes about an hour. We had a great team – it’s really nice when a team is used to working together and can anticipate whatever the surgeon needs. Everything went very well.”

Seneviratne confirmed this: “You need a very experienced team who are on the ball because we needed 27 needles and sutures, which needed to be constantly given to the surgeon. It’s a synchronised exercise where everybody knows what they are doing. It was a great experience for the team.”

Tomlinson said the patient had told him subsequently that she had lost 32 lbs overall and was doing well now. She has already seen Seneviratne for a check-up and he confirmed she was doing well and had a very positive and cheerful outlook on her situation.

Senior Consultant Obstetrician and Gynaecologist/ Associate Professor Dr Sarath de Alwis-Seneviratne has been practicing medicine in the Caymans for 26 years, having previously practiced in the UK for 14 years. He has delivered thousands of babies and treated thousands of patients in the Cayman Islands over the years, with an unblemished record.

Also of interest is that this ground-breaking doctor has placed the Cayman Islands on the medical map by operating on a patient who was thought to be inoperable by leading cancer specialists in Florida.

Seneviratne explained: “The patient went to her general practitioner with pelvic pain. The GP did an ultrasound scan and found a six cm tumour which the doctor considered to be a possible carcinoma. The GP sent the patient to a consultant OB/GYN Board certified in the USA, who did a CT scan which confirmed the mass. The specialist doctor suspected a malignancy and sent the patient to Baptist Hospital in Florida to one of the best doctors in the world.”

In the USA, the doctors did an MRI and booked the patient in for surgery, but during the surgery, they had a lot of trouble and could not find the tumour because it was not easily accessible. Having spent thousands of dollars up until this point, the patient finally came back to the Caymans with the tumour still inside her.

” We did a scan in my surgery and I identified the tumour to be about six or seven centimeters,” Seneviratne said. “I took her to the operating room and put her under the laparoscope. I do this special technique where I insert a rigid catheter into the bladder and shake the catheter. When the catheter was shaken only the top of the bladder was shaking not the entire bladder, which meant that the tumour was under the bladder. This is an extremely rare presentation and cannot be seen if you just look through a telescope and have a look. I then went under the bladder and removed the tumour, from between the ureters.”

He said that the tumour was bigger than the uterus and the tubes and ovaries put together.

“After two days in the hospital she went home and the biopsy was benign and now she is happy and well,” he confirmed.

Seneviratne is involved in innumerable charities in the Cayman Islands, Sri Lanka and in the Philippines, albeit anonymously. Recently he provided dry rations for the villages around his ancestral home to 750 families.

Dr. Seneviratne’s ualifications include FRCS(Edin), FRCOG(GB), MRCP(Ire), FFSRH(GB), FACOG(USA), MS.(SL), MRCS/LRCP(GB), LRCP/LRCP&S(Edin) and a whole host of other diplomas and memberships. He has a laparoscopic entry method named after him, a suture technique for suturing the vagina and an efficient posture for examination of a prolapsed uterus.

As a fine sportsman here, he captained Sri Lanka cricket President’s Eleven against Malaysia; he headed the national batting, averages in 1976, captained Sri Lanka against Agra at hockey after the New Delhi tournament in India and was awarded the Sports Star trophy at the university. He captained the Colombo and Combined University cricket teams. He captained STC and Combined Schools cricket in 1965. He also represented the Nation in hockey at the Asian Games in Thailand.

Interestingly, he top-scored each time he played against foreign teams. This included the match against State Bank of India, captained by Ajith Wadekar, where the National team was captained by the famous Stanley Jayasinghe. He scored half a century facing up to Venkatarhagavan and V.V.Kumar who were considered to be the best spinners in the world at that time.