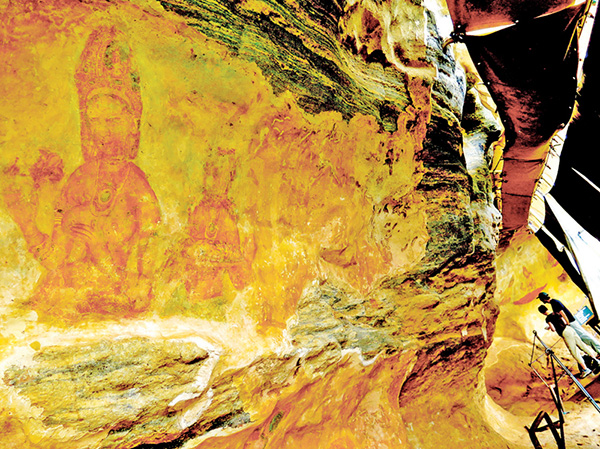 Sigiriya Rock Palace: A historic marvel with its paintings of the king’s harem

Go early morning and listen to the orchestra of birds, and see the troops of monkeys playing in the moat around this incredibly grand rock palace, an extraordinarily beautiful arrangement of boulder gardens that sport natural fountains from January to early February, only dwarfed by the sheer size and majesty of this massive bold outcrop on the surrounding awe-inspiring landscape. Its sheer faces and overhangs challenge even the boldest of spirits to free style climb and when the wind is gusting, despite all the safety equipment, one is occasionally left with heart in mouth, especially when contemplating sudden heavy rainfall on the metal staircase or a swarm of hornets that are angered by the intrusion. There is the main route upwards an easy walk and yet if you have time the countless little cuttings in the big rock that form side rocky pathways are also worth looking at for their natural beauty and also occasional wildlife. As the main climb takes you from one side of the rock to the other deeper crevices I discover other less well preserved caves where Man’s art has taken a minuscule hold to define a moment in its history of opulence and also simplicity.

The highlight for me overtime I go is the gigantic size of the Lion’s feet and final stairway to the King Kashyapa’s main palace above guarded today by active hornets nests I am reminded that silence is essential to get past these sentinels with dangerous stings. Ever grander vistas prepare one gradually for the final climb to the ruins of a community of people who once served their king in self-sufficient style. As I made the final ascent and after musing at a sign depicting what looks like someone jumping over the edge chased by swarms of wasp, I see two more giant hornets’ nests hanging from the majestic rock with far more power to protect the sanctity of the place than the lion’s feet beneath. Just above the nests I could see the smallest of pathways cut into the rock for this final section and marvelled that anyone could walk along these tiny niches let alone carry anything like food with them for the King and then what if it rains or gusts with wind or worse, both. The thought made me cling to the British built stair case that takes you to the top of the Sigiriya rock palace passing the mirror wall.

Sadly the poetic quotes of previous travellers over the centuries have more or less rubbed off the mirror wall and the beautiful women’s faces are dwindling in number from the original hundreds of stunning faces that adorned this magical spot overlooking this epic landscape due to the brightness of the harsh tropical sunlight. However there are enough regal women of various nations still in good condition carrying gifts, for all eternity to study their opulent, yet simple way of life. These rock maidens are ‘immortalised’ and celebrated in a way not seen today with its locals and foreigners divisions. Then again one is confronted with Man’s modern failings by the frequent warnings and pleadings, ignored in past-times, not to deface the beautiful Sinhalese writings that reflect old musings on the beauties above.

Arriving at the summit of the rock, I’m first struck with wonderful views across the top with a craggy tree framing mountains in the background all surrounded by a huge expanse of a very varied landscape of forests, ponds, fields and rocks with scatterings of humanity punctuating the spaces in between. One can sit up here for hours and contemplate the meaning of life. I’m fortunate enough to see the rare sight of the fastest bird in Sri Lanka, the Shaheen Falcon, which glides across the rock just above its horizon and then disappears below it.

The top of the rock is a marvel and one feels compelled to jump with joy on arrival to celebrate the climb and splendid ancient architecture with the remains of all parts of this micro-ecosystem created for the King of kings. Lots of work is put in to maintain the walls and vegetable garden areas. A large royal swimming pool looked very inviting if it hadn’t been so windy and as you stand at the far end of it looking in you can find yourself being transported back to a time, when time was slower and everyone grew their own food, slept at sunset and got up at sunrise, served perhaps one master who cared about the future and not just today. A time when women were worshipped in their beautiful naked attired, by the King who lay out on the largest stone chaise longue overlooking a pool, I have ever seen and today you too enjoy the views from his throne.

The views all around are stunning and have to be seen to be believed but I couldn’t help wondering what happened to a civilisation as great as the Roman and Greek empire, perhaps far greater in their understanding of preserving great works of art on a cave wall and advanced use of underwater hydraulics. That said I found it all uplifting and the way down was just as appealing as the views of the gardens below are amazing and we were again treated to the sight of falcons circling around us before alighting in its cave above the sheer rock face. Near the bottom I deviated down a path towards the ‘Foreigners car park’ and strangely found myself at a sheer-faced dead-end amongst countless boulders. Back tracking I finally found the ‘foreigners car park’ through eleven floor levels (terraces) and a number of very large boulders all with little stair cuttings inserted on the side of the main rock, which was clearly the original way people reached the heady heights of this majestic palace. Walking past these funny little paths and through them past one or two with highly ornate small fragmented pieces of ancient plastered frescoed artworks, which was accompanied by a symphony of cicadas as the day heated up, and crickets jumped across a boulder, as more birds looking for food vanished and reappeared with a worm in their beaks. This is truly serene and fascinating place with many visual gems to discover and savour is worth returning to many times over. A place where ancient voices whisper their secrets and if you are lucky you will see the natural water fountains of Sigiriya’s amazing underwater boulder gardens hydraulics working at certain times of year or after very heavy rains in a freak storm. What ever the weather or season, Sigriya is one of the great wonders of the world and its breath taking beauty will remain with you for a lifetime. 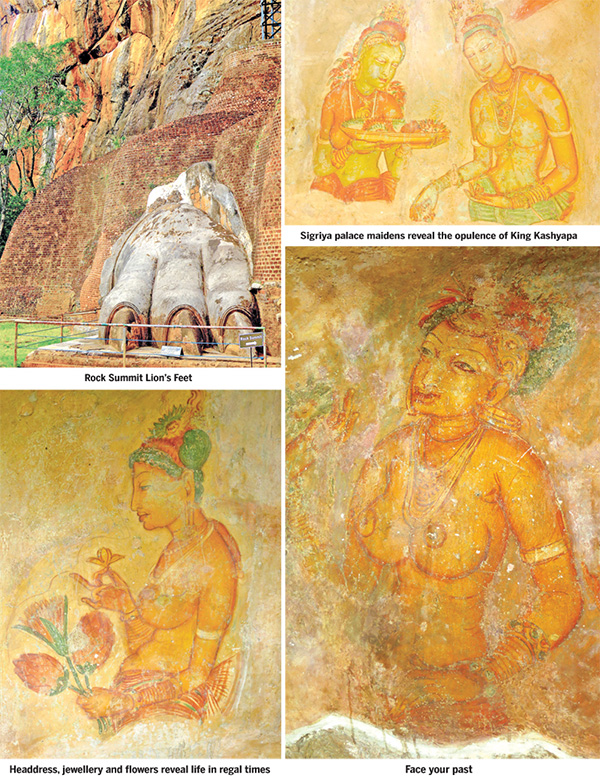