December is a holiday month for schoolchildren when many office workers also take their yearend holidays. However, the deadly Covid-19 pandemic has put an end to all this not only in Sri Lanka but around the world this Christmas season. The pilgrim trek to Sri Pada (Adam’s Peak) also begins this month and goes on till April.

I recall a journey to Kandy during Christmas days somewhere in the early 1980s when I was an ardent reader and contributor to the now defunct Kalpana , a monthly Sinhala magazine popular among the Sinhala readers. The editor of the magazine, Gunadasa Liyanage did a fantastic cover story on the Ampitiya Seminary in Kandy in December, 1983, with a colourful cover picture of the building photographed on a cool mist-laden morning.

Having seen the magazine, I nursed an ambition to visit the Ampitiya Seminary one day as a photographer. I got the opportunity during a visit to Kandy some time back. Although I visit most Buddhist shrines around the country, I visit religious shrines of other communities as well.

A few kilometres from the Kandy city, nestled in the summit of the Ampitiya hill covered with lush greenery, the majestic Ampitiya Seminary stands in perfect harmony with the surroundings. I decided to pay homage to this seminary and, as a photographer, I wished to capture its daily routine. So, one misty morning, I visited this calm and tranquil place in Ampitiya, 2,000 feet above sea level, overlooking the panoramic beauty of the Dumbara valley. 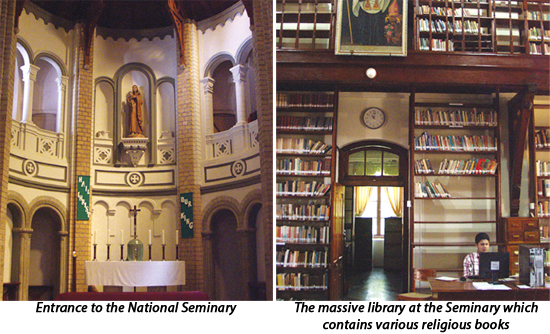 I was greeted by the senior priest, who took me to every corner of the Seminary, showing me the historic and academic importance of the place. It had a well-kept space of greenery, a chapel and buildings for the priests. There is also a forested estate and farm at the back, with stone benches and statues amid the forest canopy where you can wander about at leisure..

Following a decision taken by Pope Leo XIII in 1890 to set up a Central Seminary for the training of indigenous clergy of India and Ceylon, the Seminary at Ampitiya was set up on May 3, 1893. Fr. S. Grosjean was chosen as the first Superior of the new Seminary. It had a modest beginning and was intended to disseminate knowledge in Philosophy, Physics, Mathematics and Latin.

The Papal Seminary’s main building was completed in 1899. Initially, the Seminary attracted students from India, and by 1899 the institution took on the official denomination of Pontificiam Seminarian Kandyense. Students selected from dioceses in India and Ceylon came here to be groomed, ordained and become future leaders of the Church, in their own countries. The Ampitiya Seminary was one of the first major seminaries supported by the Pontifical Society of St. Peter and Apostle. 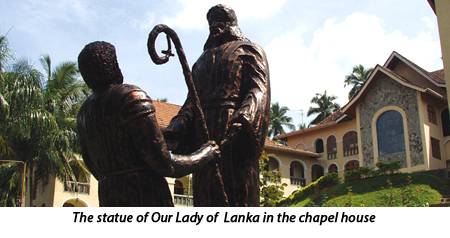 In 1926, the Ampitiya Papal Seminary was empowered by Rome to confer ecclesiastical degrees in Philosophy and Theology. From its inception in 1893, until its shift to Poona in 1955, seventy five priests and 18 lay brothers served as formatters, in maintenance, while attending to diverse functions involved in the running of a Seminary. When the Papal Seminary was moved to Poona in 1955, Ampitiya became the home of the National Seminary of Our Lady of Lanka, catering to the need to establish a National Seminary for the whole island comprising all 11 dioceses in Sri Lanka.

The first academic year of the National Seminary was inaugurated on September 10, 1955. The first Rector of the National Seminary was Fr. Fredrick Sackett OMI, an American, who constructed a building with 80 rooms for students, an auditorium and lecture halls. This new institution in close proximity to the Kandy city gained prominence and admiration as the ‘The Home of Love.’ It also produced a local Bishop -Mgr. Bede Beekmeyer. The students enjoy the little rigidities imposed on them and are engaged in deep personal prayer apart from acquiring knowledge in Theology.

The Seminary also ministered to the spiritual welfare of those who lived in the locality. The Rector of the Seminary was officially the Parish Priest with a full time pastor assisting in religious activities. Later the Ampitiya College was set up in the premises by Fr. A. Berrewaerts who was appointed as Professor of the Seminary. He earned the reputation as a ‘good teacher and efficient disciplinarian and one who excelled in everything even sweeping the classrooms and cleaning every nook and corner.’

The Seminary was thereafter shifted to YatawaraWalauwa in Ampitiya. This building was modified to give it a majestic appearance in perfect harmony with its surroundings. Situated close to a Buddhist temple, this Papal Seminary nursed the cream of the clergy from all parts of South-East Asia and is acknowledged as Sri Lanka’s National Seminary. The Kandyan architectural features of the building befit a Buddhist temple rather than a Roman Catholic Church. The Ampitiya Seminary now serves as an impressive centre of excellence in ecclesiastical teachings providing well-structured facilities and orientation in community services. The Seminary library contains a large collection of books on chanting and comparative religion.