The pandemic might have grounded planes, trains and automobiles, but it won’t be derailing the world’s most famous sleigh.

Santa Claus will be coming to town this year, with the permission of the government – to the relief of every child – and parent – in the country.

While international travel has almost come to a stop during 2020, the Ministry of Health has come up with a one-off special plan for the globetrotting bearer of gifts and his reindeer.

A spokesperson said the ministry had been in direct contact with Santa’s North Pole base to discuss arrangements for Christmas due to Covid-19 induced border restrictions.

“Santa Claus will appoint a New Zealander to be the official Aotearoa Santa Claus so a traditional Kiwi Christmas can go ahead,” the spokesperson said.

“This means the Kiwi Santa can get to all corners of New Zealand and no Kiwi kids will miss out on seeing Santa Claus. However, this year, the Covid-19 pandemic does mean extra precautions will be in place for those wanting to visit Santa in the local mall such as a QR code for each Christmas grotto.”

The ministry also warns that as Santa is in the vulnerable age group – having turned 1149 this year – it is advising anyone wanting to tell Santa what they want for Christmas at one of his grottos to adhere to the rules.

They need to use hand sanitiser before entering the grotto, use the Covid Tracer app, and if anyone feels unwell not to visit Santa but send a letter with Christmas wishes instead.

Auckland University physics professor Shaun Hendy said while Santa will not have to isolate, he still had an obstacle to overcome before he travelled from Greenland to Aotearoa.

“I think Santa will be one of the first in line for the vaccine, which will protect him and allow [Director of Health] Ashley Bloomfield to issue a special dispensation so that he can skip managed isolation and quarantine,” he said.

“I do worry about whether he will be able to get travel insurance this year, so I’d advise everyone to make sure they’ve cleaned their chimneys – if Santa has to call in an emergency chimney sweep, his insurer may not cover it.”

On asked about such cover, a high street insurer replied: “huh?” 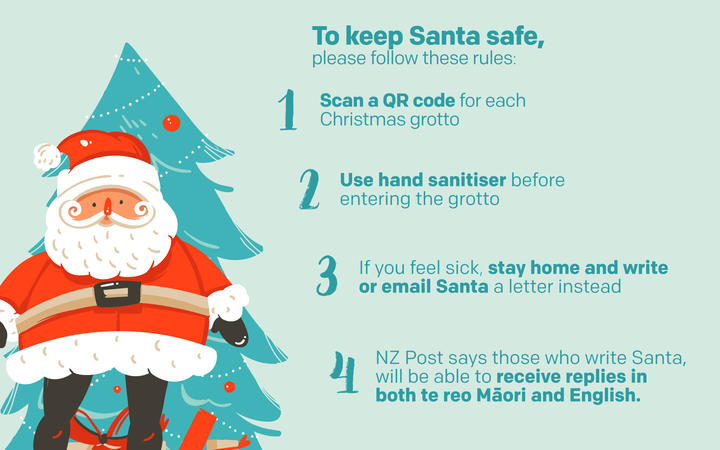 Meanwhile, NZ Post said children would be able to receive replies from Santa in both te reo Māori and English.

“Last year NZ Post responded to over 70,000 letters to Santa, and this year we’re looking forward to helping Santa receive these responses, and deliver replies to even more children this year.

“Messages can be sent online using our interactive website or by post. Teachers can also request postcards from Santa for their classroom,” an NZ Post spokesperson said.

It is believed that Santa appreciates Whittaker’s chocolate along with his glass of milk on his Kiwi travels, while his reindeers like the taste of kumara and yams.

*Craig Stephen is a part-time bulletin editor at RNZ who hails from Scotland.