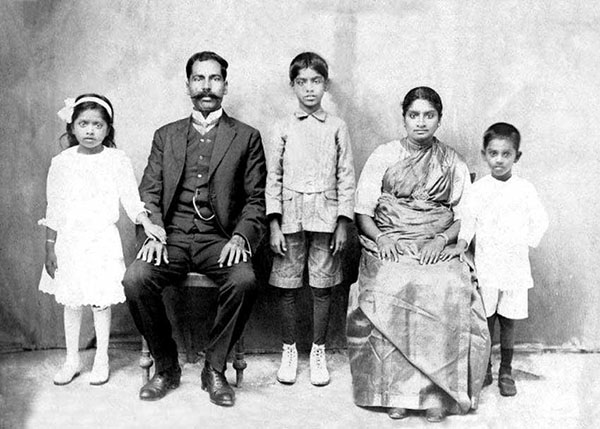 Alagu at the centre (Family photo)

Alagu was born in 1910. He was the eldest son of judge A.R Subramaniam and wife Gnanamma and grew to be a striking handsome figure of over 6ft.tall

Alagu Subramaniam (1910 – 1971) was a barrister-at-law, short story, radio script writer and playwright who hailed from Jaffna. His father was a judge and his grandfather a literary personage. Alagu had successfully combined in himself, his father’s legal career and his grandfather’s literary genius. Alagu was a prominent figure in London’s Bloomsbury literary circle1 in the 1930s and 40s. He wrote short stories that capture the behaviour of people whether it be Ceylonese during the colonial era or contemporary English life during and prior to the war. These stories were broadcast on the home and overseas services of the BBC. His short story ‘The Mathematician’ has been compared for its good-humoured raillery with one of the greatest writers of short fiction in history, Anton Chekhov. More recently in 2014, Prof. Gamini Fonseka, senior lecturer in English at Ruhuna University wrote a paper on the story ‘Professional Mourners’ which has attracted 4000 views from an international readership across the world. His subsequent review of the short stories compiled in the book The Big Girl which appeared in the Sunday Island dated June 23rd, 2019. These stories were also reviewed by an Australian, Rodney Hall, which appeared in The Sri Lankan e-paper Daily FT of February 16th, 2019. Alagu was born in 1910. He was the eldest son of judge A.R Subramaniam and wife Gnanamma and grew to be a striking handsome figure of over 6ft. tall. He spent his childhood in Trincomalee. They lived in a government house within the fort with a sentry placed at the entrance. Alagu later came to Jaffna to attend high school. He completed his schooling at Jaffna Central College (JCC) and his Senior School Certificate (conducted by the University of Cambridge for Ceylon schools in those days), in Dec 1926 at the age of 16. Thereafter he was sent to England to study law. He went by ship with a photo of his sister in his possession which he was instructed to present to his brother in law to be, who was completing an Engineering degree at Imperial college.

Alagu was admitted as a student at Lincoln’s Inn (one of the 4 Inns of Court) on the 26th of April 1933 to do his bar exam. He was called to the English bar on June 25, 1941. These dates are from the black books of Lincoln’s Inn6. He was called to the bar by the treasurer (head of the Inn), Sir Herbert Cunliffe. He had been proposed for the bar by William Cleveland-Stevens, one of the Inn’s governing body known as benchers.

Alagu would have done his bar examination course with the Council of Legal Education (CLE) in London. In addition to passing the exams, to be called to the bar, Alagu would have had to “keep term” by dining in the Hall of the Inn. They had to dine 6 times per term and do this for 12 terms (72 meals in all) which would take at least 3 years! This was a throwback to times when much of a student’s legal learning was done in discussion with barrister members during mealtimes. Also, they had to be 21 years of age and have their names screened in the public rooms of their Inn for 8 days in the term they were to be called in.

Bloomsbury
Alagu was a prominent figure in London’s Bloomsbury literary circle. The famous authors Virginia & Leonard Woolf were part of this group, and it is highly probable that Virginia reviewed Alagu’s stories when he presented them at the circle. He was one of the founders and editors of the literary magazine Indian Writing8. Rabindranath Tagore and Jawaharlal Nehru were two of its eminent contributors. Alagu was also secretary of the London branch of Indian Progressive Writers’ Association and was involved in the anti-colonial organisation Swaraj House. He worked as assistant to Sasadhar Sinha who opened the Bibliophile bookshop in the winter months of 1935 in London. Indian Writing was published infrequently during the war and had financial support from T S Eliot. They published articles, short stories and reviews. The wellknown writer R.K Narayan too, contributed.

Mulk Raj Anand was probably the most closely connected to the Woolfs, having worked for a while as editor at the Hogarth Press which was founded by them.

Meary James Tambimuttu was a Ceylonese poet who played a significant role in the literary scenes of London and New York. In 1939 he founded the literary magazine Poetry London which later became Poetry London-New York.
Alagu was interviewed as the Bohemian with a glass of beer in his hand in The London Illustrated dated December 7, 1946. He said “Intellectuals are silly, but quite harmless. Bloomsbury is a port of call in their education. There’s no future in it.” So much for Bloomsbury as a cradle of the intelligentsia!

Return to Ceylon
Alagu returned to his home in Jaffna in 1947. He was a brilliant lawyer and when requested to appear for someone, he usually did this impromptu without preparation and won the case. Having lived in England for a considerable time, he did not adjust well to the conservative life in Jaffna and missed his English girlfriend whom his parents had prevented from marrying. Although he could have had a successful legal career, he preferred his literary pursuits. Quote by Lester Hutchinson, D. es. L., former M.P. (British House of Commons) “Mr Subramaniam could have had a sound practice at the English Bar, but he preferred to pursue his literary work, which is of a higher order.” Those who can recollect Alagu walking down the Cross streets of Jaffna when they were children, say how he would walk along with the air of a poet, always wore a suit, had longish hair and wore a scarf in the tropics, not for warmth, but for colour. He was frequently invited to speak at ‘After Dinner Talks’ at schools and for proposing a toast at functions. He was popular for his enthralling speeches filled with humour. Alagu’s much younger cousin recalls that they hid from him because he used to stare at beautiful girls, simply because he liked to admire them. He eventually married a graduate teacher from Udupiddy Girls College, Miss Sellakandu to whom he dedicated his second book. They did not have any children. They lived in Uddupiddy, Sellakandu’s hometown. This is where he passed away in 1971 ailing from throat cancer, aged 61.

Dr Nagalingam Ethirveerasingham, Gold medallist at Tokyo Asian Games 1958 said, “Everyone knows A.S. lived in a beautiful house in front of Vembadi hostel End. Every weekday I would see A.S. in a rickshaw going from his house to the Courts past Central. He was very fair, dressed like a barrister. I think he smoked a pipe. I always thought of him as an Englishman”.

Stories
The Big Girl & Other Stories is a collection of 17 short stories by Alagu. They recount scenes and behaviour of the Jaffna society in the colonial era. Alagu started writing them when he was in his late twenties whilst in England and they first appeared in the Indian Writing magazine in the early 1940s, ‘Professional Mourners’ appearing in the summer 1940 edition.

These stories reflect scenes of Alagu’s personal experiences of a bygone era. The Big Girl presents both the contrasts and continuities between past Ceylon and present day Sri Lanka while incorporating some of Alagu’s biographical details. His second book Closing Time & Other Stories contains more stories set in London, a representation of the life of a foreign student living and studying in London, during the blitz of WWII as he had done. The story ‘Single Room’ is about a new student in London, looking for a room for himself. ‘The Kid’ features a law student who is also a writer. ‘Liabilities’ is about a barrister working as a manager of a bookshop and ‘Closing Time’ is about a group of writers and poets who move from one pub to another after each one closes.

In 1999 Raja Srikantan, chief editor of Thinakaran newspaper translated this story from Russian to Tamil. This translation is held in the British library. ‘A Box of Matches’ is a sardonic tale about the American, Indian and Ceylonese cultures where one is not in the habit of saying thank you, unlike the English. He writes how people annoy him by getting a match or a light from him without expressing thanks.

In several stories, the manner in which mothers frantically arrange marriages for their sons who were about to go to England for further study, to prevent English women from ‘catching’ them reflected a common occurrence. In his case, he was too young to be married when he left Ceylon, but his parents wrote to his English girlfriend requesting she give him up. His father the judge, insisted he marry a Tamil girl with a large dowry to ‘safeguard his future’.

In ‘Cousin Thampoo’ the comma in the last sentence placed differently would entirely change the story’s meaning. In most stories, the final sentence has a comical or unusual twist which leaves the reader in contemplation. As Prof. S.W Perera, senior lecturer in English at University of Peradeniya writes in his journal article, “Alagu Subramaniam captures life in Jaffna about a half a century ago with an immediacy and assuredness that others have attempted but not always succeeded”.