Some of the country’s historic newspaper names could vanish in a new three-year strategy unveiled by media company NZME. 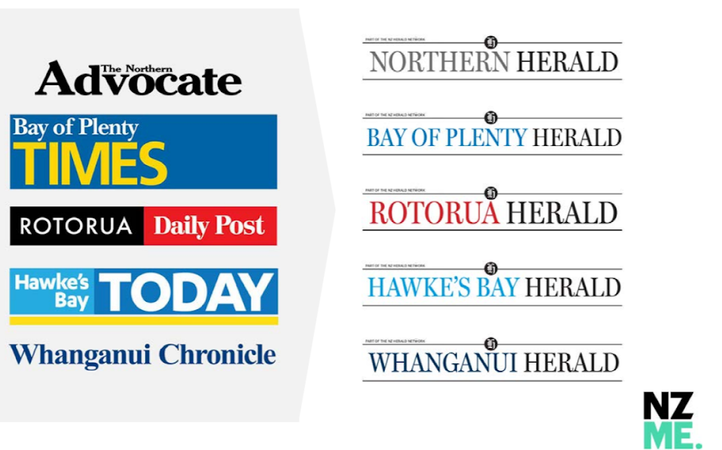 NZME’s briefing for investors proposes changing the names of its North Island daily newspapers to boost the reach of its ‘Herald’ brand.
Photo: screenshot

NZME owns the New Zealand Herald and five other North island newspapers as well as half of the country’s commercial radio stations.

It refers to “a bold plan to grow and leverage New Zealand’s Herald, building our community connection – including exploring new regional mastheads.”

The document doesn’t say when the change might happen.

“We’ll be developing stronger local digital homepages across our regional publications with a focus on “Herald” branding. This also includes exploring how our regional mastheads might evolve to support the “New Zealand’s Herald” strategy in the future,” a spokesperson told Mediawatch. 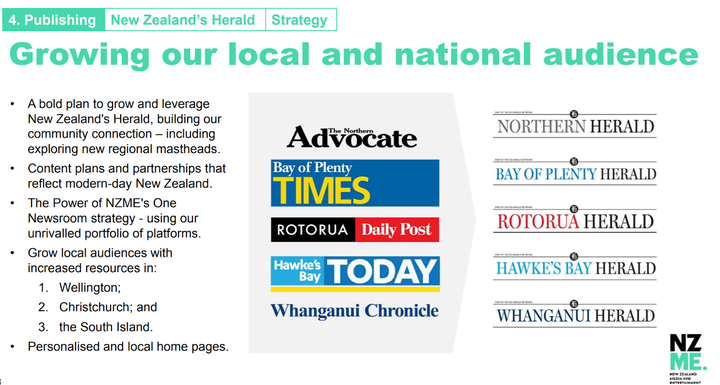 NZME’s briefing for investors proposes changing the names of its North Island daily newspapers to boost the reach of its ‘Herald’ brand.
Photo: screenshot

NZME had shed all its newspapers in the South Island and lower North Island by 2013, but the new strategy said NZME plans to “grow local audiences with increased resources in Wellington; Christchurch and the South Island.”

This was also signaled in August when NZME delivered better-than-expected annual financial results.

“We’ve looked to invest in R&D spend in further business journalism and in regional journalism, specifically in Wellington and Christchurch,” the chief executive at the time, Michael Boggs, told reporters at the time.

Today’s briefing for investors also details an increase in people signing up for digital subscriptions and paying for the Herald’s premium content online.

The company has now 93,000 Herald premium subscribers including newspaper subscribers who get access for free; 49,000 are described as paid digital subscribers according to NZME’s statement to the NZX.

It now plans to target more “more than 210,000 total subscribers by the end of 2023, with digital-only subscriptions exceeding print subscriptions.

“NZME’s aim is that by 2025 over 15 percent of New Zealand households will be New Zealand Herald subscribers in print or digital,” the document said.

It also announced today that investment advisory firm Grant Samuel has been appointed to explore selling its digital discount voucher sales business GrabOne because “the business does not fit within NZME’s three strategic priorities.”