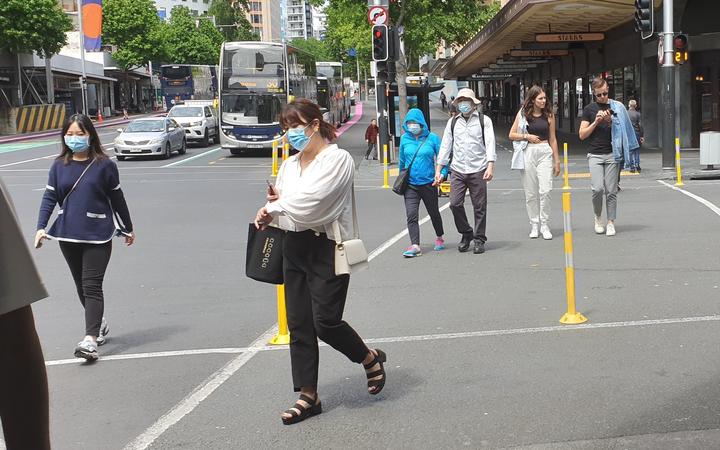 Masks will be mandatory on most public transport in Auckland and all domestic flights around the country from midnight Wednesday after Cabinet met to discuss the move today. Prime Minister Jacinda Ardern and Covid-19 Response Minister Chris Hipkins announced the move this afternoon.

Travel on public transport in and out of Auckland will also be covered, but children under 12 and school buses will be exempt. Taxi and ride share drivers will be required to wear masks, but not their passengers.

Many people in the city centre today were wearing a mask, after a community case was announced last week.

Those who did not have a mask on said they had one handy, and would wear it where physical distancing was harder.

On Queen Street in Auckland CBD, Patricia Lavemai and her partner were waiting for a bus.

They each had a cloth mask on with a valve – they wear them whenever they are out and about – even before the community case announced was last week.

“At the beginning I didn’t go out for seven weeks, but then I have worn a mask 98 percent of the time,” Lavemai said.

The government had been slow making masks compulsory, she said.

“Why do doctors and nurses wear masks? To stop the spread of germs – common sense. We should have been wearing them since … March.”

Coming to the city for work today, Aucklander Lynx said she was surprised how few people were wearing a mask. Lynx agreed it was a good idea to make mask wearing mandatory, to help prevent the spread of Covid-19.

Lynx did not think the government response had been slow, but was “responding to the situation as it evolves”.

Alexandra Linnell was visiting Auckland with her mother from Hawke’s Bay. They were not wearing masks, but said they had them in their bags and would wear one on public transport.

Linnell said they seldom used the Covid Tracer app in their hometown, but changed habits in Auckland.

“Travel here, we’re going to lots of different shops, some different places at different times, so it’s very hard to keep track of where we’ve actually been if you had to sit down and suddenly remember… In Hawkes’ Bay, I know who I visited or what day I went to work,” she said.

Amanda Toner and her partner had just moved to live and work in Auckland from Napier. They did not wear a mask on the street today because it was easy to maintain physical distance, she said.

“If we weren’t able to keep social distance, we would probably have masks on. We’ve got them in our bags, ready to go, so they’re on us if we need them, and if we we’re to catch a bus or train, we would put them on.”

Toner said they used the Covid Tracer app in Napier once in a while, but would use it more often in Auckland.

Fines for not masking

According to the Public Health Response Act, a person might be liable for an infringement fee of $300 or a fine imposed by a court of up to $1000 for not complying with the mask rules.

People were divided on the issue of fines.

“When it goes mandatory, that means you must do it and if you don’t, you break the law. If you break the law, there’re consequences… they have to be stricter on people that break the rules… if we want to get through this,” Lavemai said.

Alexandra’s mother, Lynsie, said it would put burden on people who could not afford it.

Ardern and Hipkins made clear at this afternoon’s media briefing that police would be the ones enforcing the rules, rather than bus and taxi drivers, and would be taking an education-first approach.

Auckland Transport (AT) has been encouraging all passengers to wear masks immediately, even though they’re not compulsory until Thursday, asking people to start wearing their masks at bus stops and train platforms before boarding.

There was one new case of Covid-19 in managed isolation today, but no new cases in the community.