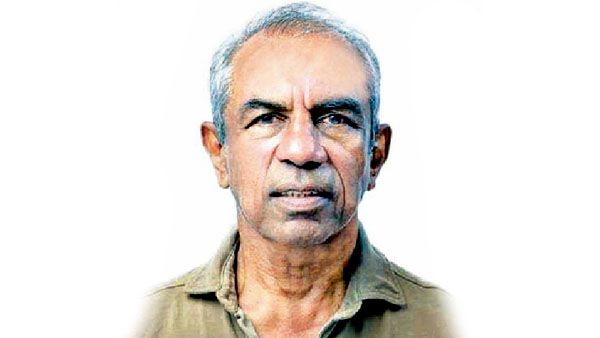 The Hooker is a key position in rugby. One should have immense talent to occupy this slot which plays a pivotal role in securing the ball from the ‘Pack’ to the back division to create scoring opportunities.Hooker Mohan Balasuriya was one of the great rugby players produced by Trinity College, Kandy, who stole the limelight in the rugby arena as a player locally and Internationally later turned out to be a top administrator serving in various capacities in the rugby fraternity.

Mohan’s father was A. Balasuriya, a lecturer at the Teacher Training College, Uyanwatte. He was a cricketer who captained Education Department team to win the Daily News Trophy in the 1960’s and was a founder member of the Central Province Cricket Umpires Association, while his mother who was a a Teacher retired after serving as a Principal.

He had four brothers Roy a graduate from University of Kelaniya who donned the rugby jersey for Trinity College, CR and FC and Sri Lanka respectively. (Mohan and Roy played for Sri Lanka team in the Rugby Asiad held in Hong Kong in 1972). Ranjit the other brother was a hockey player representing Trinity and Kingswood Colleges.

Gamini was his third brother who played for Trinity College in 1973 and 1974 and joined the Army and retired as an Colonel. Mahendra is the youngest brother schooled at Dharmaraja College, Kandy and played rugby for Kandy Sports Club. The only sister Kamalini studied at Hillwood College and Girls High School, Kandy later graduated from University of Peradeniya. She is living in Sydney, Australia.

Mohan too had a desire for sports from his childhood as rugby took the top spot. When he started handling the oval shaped ball from the junior level, he was appointed as the Captain of the Trinity under-17 rugby team in 1967. Spotting his phenomenal talent, the school authority called him to don the College first XV jersey in 1968 under Ajith Abeyratne’s captaincy, which earned him the College Colours in Rugby. He went on to play for the Ceylon schools team the same year. Some of his team mates at College were Ajith Abeyratne, Gogi Tillekaratne, Mark Sundaralingam, John Furlong, Buthpitiya, Shafi Jainudeen and Afeef .

After his triumphant career in school, Mohan opted to continue his rugby career engaging in the Clubs. In 1969, he joined his own town club Kandy Sports Club and played under another illustrious player Denzil Kobbekaduwa which entered the Clifford Cup final against CR and FC which they lost unfortunately by 6=12. Next year his services were sought by the Up Country team for which he responded positively playing for them that season.

While maturing as a prominent player in the Hill Capital, he then decided to migrate to Colombo seeking employment. While in Colombo, CR and FC extended an invitation to join them which he obliged and represented them in the 1970 and 1971 seasons. He was fortunate to lock horns for CR with some of the greats in the game in that era like Mohan Sahayam, D.V..P. Samarasekera, Hadji Omar,Kamal Ratnapala Shiraz Fernando Ajit Abeyratne, Sari de Sylva Malik Samarawickrama, Ronnie Schokman, Reggie Bartholomeusz Roy Balasuriya and T.B. Wijesinghe

In 1971, he was called to represent the All Ceylon Team against the visiting England side. With this performance Sri Lanka Air Force recruited him in 1972 where he locked horns for them and the Ceylon Team at the Rugby Asiad in Hong Kong in 1972 From 1974 to 1981, he played for the Air Force while Captaining them in his final year. In 1976, he represented the

He would like to make a special note, that year, after the Hong Kong Sevens one of his school mates, Lanil Tennekoon was an automatic choice to represent the Invitation Rugby XV in a fixture against the Hong Kong national side. That Invitation team was captained by the Wallabies Rugby Captain Mark Loan and consisted of players from the nations who participated at the Hong Kong sevens and justified his selection by scoring the winning try. The other player from Sri Lanka to be selected to play in that team was Michael Jayasekera. Mohan hung up his boots by playing in the 1980 season for Air Force before he opted to get into Rugby administration.

His wife is Ayomi while the two children are Son Devaka and daughter Sheana and all of them including Mohan are domiciled in the USA.