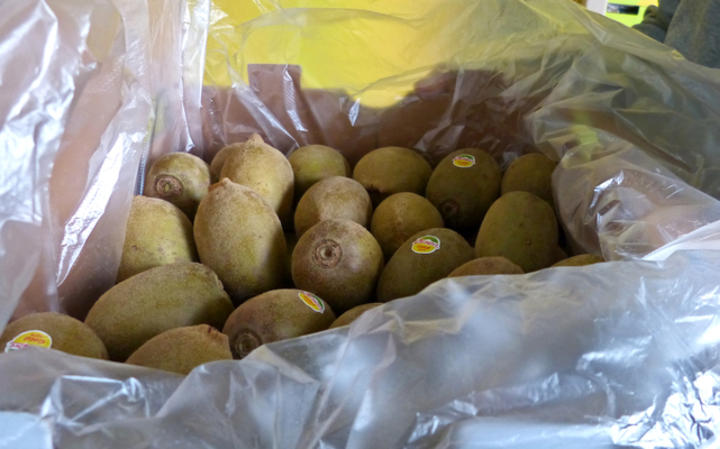 Zespri says it has been advised to trial working with the small growers in China.
Photo: RNZ / Jane Patterson

Since late 2019, unlawful plantings of the variety in China have almost doubled to 4000 hectares.

Growers in New Zealand pay hundreds of thousands of dollars per hectare to grow it and Zespri will continue looking at legal channels to protect its plant variety rights.

But Zespri chief grower and alliances officer Dave Courtney said it had been advised to trial working with the small growers in China, in the hope this would prevent more plantings.

The trial will take fruit from 50 hectares, which is equivalent to about 200,000 trays.

“As things look today, there will be substantial plantings of locally grown G3 in the market so what we are thinking is if we can procure some of that to hold our shelf space. Just as we do with Italian fruit around the world at the moment for when we can’t provide it at the moment. Similar concept.”

“But we’re walking very, very slowly as to understand how that works,” Courtney said.

He described the trial as a pragmatic solution because there are different pathways and Zespri will look at all of them.

“We’ve got out and about and spoken to a number of companies, including some pretty big international brands that are producing or procuring food up there, and some have failed and others have skinned their knees and been successful. So there’s certainly enough light there to show it can be done but everyone in the end has to strike their own path. So while we’ll learn from these guys, we’ll make our own way forward. We have to get our hands dirty basically,” he said.

Courtney said some growers believed the proposal made sense, but many were very uncomfortable and worried it would dame the Zespri brand.

The trials may run over two seasons and Zespri chief executive Dan Mathieson is up in China at present meeting officials and others to promote Zespri’s ideas.

In the past, Courtney said the Chinese orchards were not high producers, but if they learn to grow it well, it could push New Zealand fruit off supermarket shelves and lower prices.

Eradicating the plantings is not possible.