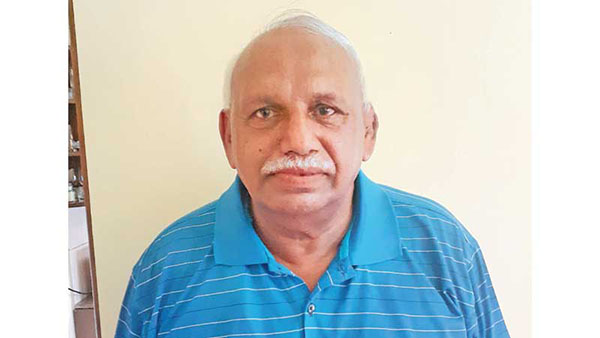 St.Benedict’s College, Kotahena is one of the leading Catholic schools in the country  which has produced some quality yesteryear players, who donned the National jersey in several sports at International level. Gaston Rohan Gunaratne was one of them who made his ‘Alma Mater’ proud by representing the country in Basketball and Rugby.

Rohan hails from a sports loving family  His father is late Basil Gunaratne from Kalutara who served in the Health Department while his mother was Rosebell Gunaratne from Mutwal. Being the eldest in the family he has three brothers Philip, Keerthi and Jayantha while the sister is Basilda.

All three brothers excelled in sports while his younger brother Keerthi represented the Sri Lanka cricket team. Rohan started his school career with Holy Cross College, Kalutara and went to De La Salle College, Mutwal and later moved to St. Benedict’s College, Kotahena from grade eight onwards. When he was living in Mutwal there was a Basketball court built by the De La Salle College where Rohan played with other children. Late Rev. Bro.Edwin Ambrose was instrumental in building the courts which later encouraged many children from that area to get into Basketball. With his height he was chosen to play for St.Benedicts College team from the under-13 age category to senior level. He went on to Captain the Sri Lanka Schools Basketball team in 1971 and while   being a schoolboy  he  represented the senior National

team in 1970/71 season at the age of 17 years. Cosmos Perera Malsiri Perera Percy Perera Rienzie de Silva, Noel Perera Vivian Saverimuttupulle, Dr. C Thurairaja, Late Gen.Rohan Daluwatte, Royden de Silva, Nemantha Hatharasinghe, Kumar Bastian pillai and Duncan Jayawardena were some of his colleagues  in the National side and his career spanned over a decade. His mentor in Basketball at school was Ram Sundaralingam who played a pivotal role in grooming him as a quality player.

Apart from this, he was also an Athletic Champion at school in the Inter House Sports meet in the under-19 age category. Rohan has an interesting history in getting into the rugby arena. As a prominent Basketball player he used to attend practice under coach Ram. He also had a liking for Rugby and attended practices one day quitting Basketball. Noticing his absence, Ram the Basketball coach, reported him to the brother Rector, who summoned him and advised him about the   risk of playing rugby, especially the injury side of it and he heeded his advice and decided to quit finally. But in 1972, which was his last year in College he completed the Basketball season and joined Rugby under the coaching of Raja Sahabandu, where he played as a second row forward under late Lalith Edirisinghe’s captaincy.

Soon after he left College he joined the Sri Lanka Air Force to play Rugby and Basketball. His rugby coach was late Air Chief Marshal Harry Gunathilake  with Victor Jayaraj being the Basketball coach there. He played for them in the 1972 and 73 seasons in both sports before joining CH and FC in 1974 where Y.C. Chang, Harindra Gunesekera, Bryan Baptist, Upali Vithanage, Baratha Hegoda and Saman Jayasinghe were  some of his team mates.

He engaged himself in two seasons with them and in 1976 he wore the Police uniform as a sub Inspector. From then until 1986 he was a regular player in both forms of sports. He had the opportunity of playing with some top class players in both sports where Police remained undisputed champions.

His first skipper there was    flanker R.P.Linton He was a member of several champion sides in Police where he later went on to lead them in 1983, winning several championships. Due to his unstinted performance in both sports he was awarded the ‘Sportsman of the year’ on four consecutive occasions, which is a rare feat by any sportsman. Mohan Sahayam, Mohamed, Azain Gamini Fernando, Anton Benedict. M.A.Majeed and late Daya Jayasundera were his  coaches.

In 1983/85 played in the Hong Kong sevens and captained the side in 1985. He also led the Sri Lanka team on the tour of Hong Kong and Taiwan in 1985 His coaches were   Kavan Rambukwella, Summa Navaratnam, Jeff Ratnam, Ajith Abeyratne and GamIni Fernando at the National Level.

After hanging  up his boots in 1986 he started coaching his school St.Benedict’s for five years. He also coached the Sri Lanka National sevens team  at the Hong Kong, Singapore sevens and Malaysian sevens respectively. He also served as the Manager of the Sri Lanka National Men’s team and under-19 team.  He retired from the rugby arena after serving a decade with Sri Lankan Rugby as an Executive Director.

His wife Srimani Gunaratne  is the sister of former Havelocks player and President Lal Silva.  His Son Lakshitha Gunaratne who captained St.Joseph’s College team in 1999 represented  the Sri Lanka under-19 team at the Youth Rugby Asiad.