The sudden passing of Dean Jones last week was followed by an overwhelming response from the global sporting community.

Cricket greats and close friends paid tribute to a pioneer of the sport, whose Test career was arguably cut short in his prime.

Jones was inducted into the Australian cricket hall of fame in 2019, and is remembered as one of the country’s most influential figures in the one-day format.

As a colleague recently put it — Jones walked so Ricky Ponting could run.

Watch every match of the 2020 IPL Season LIVE on Fox Sports with Kayo. New to Kayo? Get your free trial now & start streaming instantly >

But he was also a confrontational character, on and off the field, which at times rubbed off poorly on others. His infamous request for Curtly Ambrose during an ODI match in 1993 potentially summed him up better than any other anecdote could.

Jones never shied away from voicing his opinion, and that honesty sadly resulted in the broken relationships with former teammates and cricket administration.

Earlier this year, Jones had a falling out with Cricket Victoria, requesting for his life membership to be rescinded in April.

After his retirement in 1998, Jones’ legacy was honoured when CV renamed the state one-day player of the year award The Dean Jones Medal. However, his name was removed from the accolade last summer upon the former captain’s request. 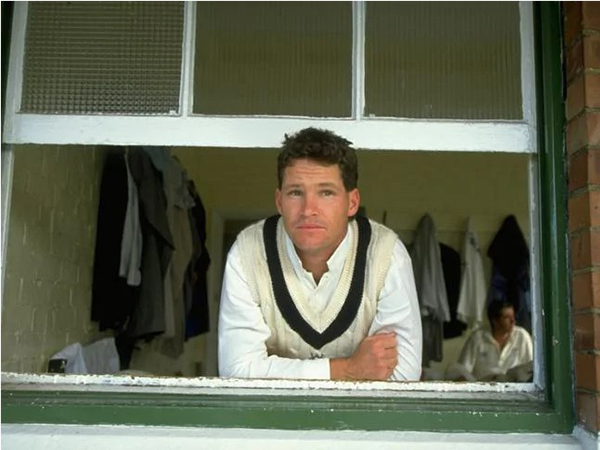 Speaking to Sportsday, Jones revealed he asked to have the honours stripped because he felt “hurt” by Cricket Victoria’s questionable management and strategic plan.

“Where it has come from is the lack of culture and vision and strategy by the CV administration has just hurt me,” Jones said in April.

“I played 20 years for my state and was proud to have done it. Their five-step plan from 2017 to 2022 is just so far wrong as to where they are going.

“They wanted to be the No. 1 sport in Victoria. Well, that is not happening after AFL.

“They wanted to make permanent Australian players. Well, we haven’t got one decent player in the Australian team except for Aaron Finch, who is the captain.

“The way the administration has looked after things is poor. They did budget costs of $2 million last year, and the Victorian team had no pre-season tournament.

“The 18 premier clubs are supposed to produce all these permanent Australian players. It is so weak. It is just awful the way it has been played.

“Our website doesn’t even mention any teams that have won shields. By the way, we have won 32.”

Having completed stints as a T20 coach in Afghanistan and Pakistan, Jones was eager to serve as head coach of a Melbourne-based Big Bash franchise, but CV opted instead for younger, more inexperienced coaches when he applied in 2019. A tribute to dean Jones at the Melbourne Cricket Ground.Source:Getty Images

The 59-year-old admitted to feeling insulted by the decision, which proved a “catalyst” for his choice to have his life membership rescinded.

“The catalyst was I put in for two jobs for the Stars and the Renegades,” Jones said.

“David Hussey resigns from the Cricket Victoria board and gets the job … He had no experience and nothing behind him.

“Michael Klinger went for the job in front of Trevor Bayliss, Brad Hodge and others. He had no experience and gets the job.

“They have given jobs for the boys, and I think it is an insult not just to me, but to overseas coaches.

“Trevor Bayliss is the best coach in the world and they didn’t want him. I feel we are going the wrong way at the moment.

“I told Shaun Graf and Andrew Ingleton, the CEO of Cricket Victoria, that I wanted my name and my life membership to be rescinded.

“They asked me why, and I said one day you might want to ring me up, because I haven’t spoken to Andrew Ingleton for 18 months, nor have I spoken to Shaun Graf.

“They rang me up in January and said we need to talk. I said, ‘Talk to me when I get back from Pakistan’. I’ve been home for three weeks. They haven’t spoken to me.”

On Friday, national coach Justin Langer revealed he foresaw a coaching role for Jones in Australia’s T20 squad ahead of next year’s World Cup.

As reported by The Australian’s Peter Lalor, Jones also had a falling out with former teammates, most notably Victorian teammate Merv Hughes.

The captivating paceman played a pivotal role in Jones’ career-defining 216 against the West Indies at Adelaide Oval in 1989, his highest score in Test cricket.

The pair combined for a ninth-wicket partnership of 114 against a bowling attack featuring Malcolm Marshall, Curtly Ambrose and Courtney Walsh, with tailender Hughes surviving 118 deliveries at the crease.

They were “closer than brothers” according to Jones, until a bitter confrontation in the twilight of their professional careers ended the friendship, one which never recovered. 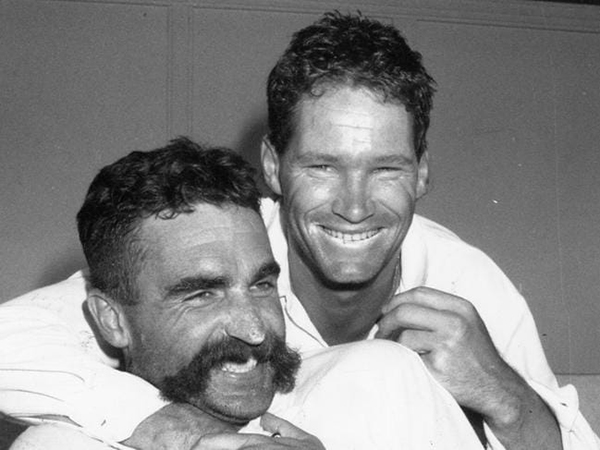 Speaking to veteran journalist Robert Craddock on Fox Sports’ Cricket Legends, Jones candidly admitted it was the biggest regret of his life.

“It got to a stage where he was injured — the previous match he had a hammy or something — and I said, ‘Mate, we’ve been told by selectors you have to do a trial match. Just bowl five overs in this trial match’,” Jones said.

“When I went upstairs at the end of the day’s play of the second XI match, all the selectors said, ‘No, he’s done, we can’t pick him’.

“He said, ‘I told you Deano, I was right. I’ll be OK for Tasmania for next week.’ And then the selectors looked at me and said, ‘It’s up to you Deano. You do whatever you think is right’.

Jones loved the game, and was a passionate state captain. But he conceded that fierce determination cost him a lifelong friendship.

“In hindsight, if I had the chance again, I’d play him. The game isn’t just about winning all the time,” Jones said.

“We went to war together. If he didn’t hang around with me in Adelaide, I never would have got a 200. He got hit 45 times.

“He was also at the end of his career as well; he was fighting those demons, and you’re a different person when you’re, ‘What do I do next?’ We didn’t know what we were going to do next in life after that, so we didn’t have much organised. It was a difficult time.

“We’re nowhere near as close as we used to be.”

lost a dear one – Dean Jones. Don’t get me wrong, he was one of fiercest

off the field he was very friendly, unassuming and good natured guy.*

We were contemporaries. He was two years older than me and made his Test

debut two years after me.*

done well in places like Australia or England. Well, that is up for debate.

In that case, I reckon, we have to also see how players from England and
Australia fared in places like India. That is why Dean Jones is such a

special player. I am never one to read too much into numbers but I am told

player, especially those from England and Australia can be proud of.*
*He was also a thorn in our flesh always making runs against us. Deano’s

Test average of 60 and ODI average of 109 against us would tell you the story.*

*Deano was a very good analyst of the game. He understood complex

situations and how to counter them. He was certainly a trend setter and

there was much that we could learn from his game. His running between the

middle. His fielding was exciting as well and he brought in so much energy

to the side. I am sure someone like Allan Border who had the task of

rebuilding the Australian side following some high profile retirements
valued the presence of Deano in the side.*

*Deano was very fond of Asian cricket. He spent lot of time in Sri Lanka

doing commentaries and that gave us an opportunity to catch up. He spent

quite a bit of time in other Asian countries as well.*

I have lost a dear friend. Deano has left us too soon. My thoughts and

prayers are with his family.*

The Aussies were in Galle for the first Test of the series in 2004 and
Dean Jones joked in commentary. He said that it took him less than four
hours from Singapore to Katunayake but five hours to get to Galle from
Katunayake! He was driving home some pertinent points. Travel in Sri Lanka
before the highway days was a nightmare. Sri Lanka Cricket did not raise
objections with the television company that employed Jones nor did the
Sports Ministry. His criticism was well taken by all and sundry. Jones
didn’t mince any words. He was a bold critic. As The Island’s former Editor
Mr. Gamini Weerakoon used to say, ‘A good journalist works with his
resignation letter in the pocket.’*
Jones was a huge fan of Sri Lanka. After the death of Tony Greig, he was
an ideal ambassador to promote tourism and he did a splendid job. Some of
his best moments in commentary came in Sri Lanka.*
He earned the nickname of ‘Professor Deano’ for the pre-match show that he
did during a triangular series in Dambulla. Jones was dressed as a
Professor giving the pitch report and supporting him was up and coming
actress Anarkali Akarsha, just 18-years-old. The show was a hit and fans
took an immediate liking to both the ex-cricketer and budding actresses.*
*Not that his career was entirely smooth. During a Test match at P. Sara
Oval in 2006, Ten Sports fired him while the day’s play was in progress for
calling Hashim Amla a ‘terrorist’. Jones was off air but the microphone in
the studio had picked his remark. He apologized immediately and was
reinstated a few months later.*
*The fact that he was shortlisted to take over from Graham Ford in 2017 as
the national cricket team’s Head Coach was a poorly kept secret by Sri
Lanka Cricket. The Island asked him what would be the first thing he would
do if he got the job. Jones said, ‘ban f***ing football during training.’
The Sri Lankan cricket team’s obsession to engage in a game of football as
warm-up before a day’s play and training was frowned upon by many given the
high number of injuries it was causing.*
*Jones was a fine batsman and in his generation only Viv Richards played
one-day cricket better. A smart thinker of the game, it was Jones’ bright
idea to run the extra run on the throw in the vast Australian grounds. He
earned a reputation as an excellent runner between the wickets and when
asked what was his secret, he replied, ‘just common sense.’ Soon, others
followed the extra run on the throw theory while playing in Australia and
it paid rich dividends.*
His finest hour in the sport came in Test cricket though during the tied
Madras Test in 1986. Jones made a double hundred and the scorching heat
took a toll on him. He was vomiting and feeling uneasy but did not throw it
away. At the end of his 210, Jones was hospitalized. Coach Bob Simpson said
that it was the greatest innings played for Australia. His final Test match
was played in Moratuwa in 1992.*
Jones was in Bombay doing studio shows for host broadcaster on IPL games.
The Island learns that he had gone for a run in the morning and was with
former fast bowler Brett Lee when he suffered a severe heart attack in the
seven star hotel lobby at lunch time. Lee desperately tried to save him
with CPR after Jones collapsed but for no avail.*
He was 59