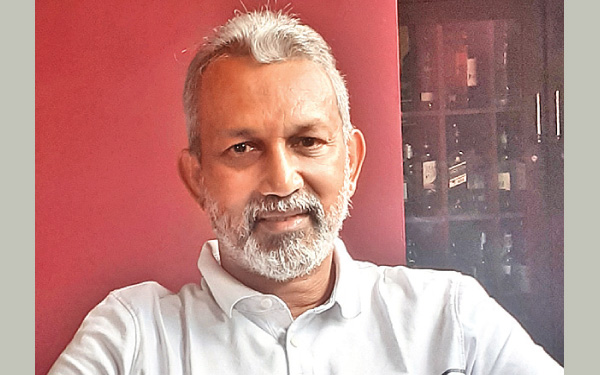 Thurstan College, Colombo is a school in the forefront, of education as well as sports producing several players, who excelled locally and internationally. Chula Dharmadasa was one of them who had an outstanding career in rugby.

Better known as ‘Chula’ in the sporting fields, he is the son of P.L.E. Dharmadasa. He has two brothers and three sisters with younger brother Vipula playing for Royal College and later represented CR and FC in rugby.

Chula who joined Thurstan for higher studies was engaged in cricket for some time initially. Janaki Abyesinghe his elder sister who was a student at Peradeniya Campus who passed out as an Electrical Engineer was instrumental in motivating him to play rugby. She was a great follower of rugby and used to witness the University games. When she met Chula she started explaining the game to him to encourage him to take up to rugby. With his body structure and height, it was very easy for him to play rugby. Subsequently, in 1974, he opted to play for the college first XV team under the coaching of Jeff Ratnam with Wickremanayke as Captain. Chula who played as a second row forward in the 1974/75 season at school along with Wickremanayake, SKA Karunathilake, Jayantha Perera, Mohandas, Jamika Liyanage, Motha.

Since he was reaching the end of his educational career, he went in search of a job in the defense services in 1976, where he could play the game while working. But due to the limited number of intake those days he failed to secure a place. In1977 he joined CH and FC and spent a couple of months there. Due to the stiff competition there filled with too many star players , he crossed over to play for Havelocks ‘Bambaras’.After joining them he finally qualified to join as a Banker at Hatton National Bank. There he enjoyed working while playing in the Mercantile Rugby sevens converting them to champion sides. In his tenure from 1977 to 1983 at HNB he was granted permission to engage full time in rugby.

Former CR and FC stalwarts Harendra Gunathilake and T A Omerdeen approached him and invited him to join them to play in competitive club rugby from 1978 to1986. His debut was under the captaincy of Roy Balasuriya and went onto scrum down under some great players like John Rudra, C.P. Abeygunwardena, Iqbal Musafar. In 1983 they clinched the SLRFU. Presidents Trophy under Cargo Siriwardena’s captaincy by overcoming Army 12-9 in the final. They went on to win the sevens tournament in 1981/2 under Rohantha Peiris.

While being a member of the match winning team, he was called for National duty in 1983 to play in the Hong Kong sevens. He also travelled to Thailand in 1983 with CR. He played a key role in the 1984 Hong Kong sevens tournament under Hisham Abdeen to clinch the “Bowl Championship”, which still remains an unbroken record. In the same year he toured with the Sri Lanka side for the Rugby Asiad in Fukuoka, Japan. He ended his Sri Lanka career in 1985 by engaging in the Hong Kong sevens before hanging up his boots, due to torn ligament while practicing at the club, which sidelined him permanently at a time when he was in his peak form.

He states that winning the 1984 “Bowl Championship” was the memorable achievement in his life. The players in that era played the game for love of the game and love of the club, under difficult circumstances. He got into rugby administration from 2002 as a National selector under Tikiri Marambe.

Then became the President of his own club CR in the 2004/5 season. CR honoured him with an honorary life membership in 2012 for the service rendered by him. He was a member in the SLRFU council under Air Marshal Roshan Gunathillake and Asanga Seneviratne. In 2012/13 he was entrusted to take over the Rugby Referees Society under an Interim Committee for a couple of years. He served as the CEO of Growth Lanka, COO of Trend Setters and presently is the Managing Director of Broadway Kids Private Limited.

Renuka is his wife, a former sportswoman from Visakha College involved in Athletics and Netball.

His two daughters Charya and Ravindri were water polo players and swimmers. Charya went on to play water polo while captaining the Navy and the country for several years. His son Savinda played rugby for Royal from the junior to senior level.