Yet another wonderful article to be shared with all of you, who are members of eLanka. This superb building in the very heart of Colombo Fort, holds special memories for “your’s truly”, as well, because it was here that the girl of my dreams worked as a Stenographer in the 1950’s. It was from one of those windows (upstairs), that she first saw the Queen of England, Elizabeth ll, making her way into Queen’s House (where else ?), which was practically opposite the P,M,G’s building. Her Majesty was in a magnificent car of course, with her husband, but they were deliberately being driven very slowly, so the adoring crowds could catch a glimpse of them. Cynthia Georgesz, one of my girlfriends at the time, told me that she was very lucky indeed to be able to see our Monarch quite clearly, adding that Queen Elizabeth was a very pretty woman. That visit coincided with Elizabeth’s 28th birthday on the 21st of April 1954, and because the Queen and her Consort had no reason to use any Postal Services at that particular time, the P.M.G’s Office, Colombo Fort becomes the focus of this story. 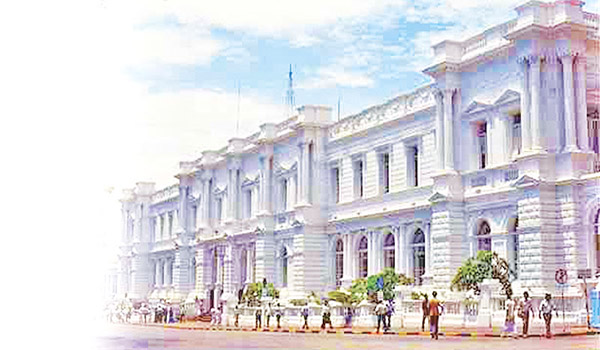 Today we live in a digitally dominated world. We communicate using various gadjets of technology. Over the past six months, Zoom chats have become vital for corporate executives and schoolchildren. Two hundred years ago, the island of Ceylon was experiencing a new dimension of communication – the use of letters sent and received through postal service.

As children, hearing the postman’s bell was a moment of delight to receive a birthday card or letter, and checking out the new stamps on the envelope. The postman attired in khaki uniform, riding his black Raleigh bicycle was a welcome friend. He was a messenger who delivered good news, and at times, he delivered bad news of someone’s death, often through a telegram. In fact, the ringing of his cycle bell was the same for good or bad news.

During festive occasions the postman would be treated with sweets and tea in appreciation of his service throughout the year. Collecting stamps was a common practice, and some developed this into a serious hobby. The old General Post Office in Fort, adjacent to the opulent President’s House was a magnificent building. It was the heart of our nation’s communication in that era. I remember going to this massive white imposing building with my father. It was always a busy place. Another venue we loved to visit during our school holidays was the small post office in Nuwara Eliya town. A postcard would be dispatched to a friend in Colombo just for fun. This beautiful Tudor-style building with red bricks was apparently built in 1894. It is one of the most beautiful colonial buildings from vintage Ceylon.

Communication has evolved over the centuries. Our ancient kings used horse-mounted riders to deliver messages. These messengers travelled in relays at times, often covering long distances, taking days to reach their destination. They were given an escort depending on the importance of the scroll being taken. Pigeons may also have been used, but there is not much evidence to endorse this method.

The postal service in England can be traced back to 1660.The first established form of postal service in Ceylon could be traced back to 1789 when the Dutch had taken control of our maritime provinces. They set up post offices in Colombo, Galle, Jaffna and Mannar. These were important coastal trading centres and postal stations operated mainly for the expatriate community who received letters via ships.

During this era, bullock carts and horse drawn carts were used to transfer parcels. In 1796, they introduced mail runners. They were robust men who carried letters in leather pouches and went on foot to deliver them. These men were given spears to protect them from the wild animals they would encounter as they passed thickets of forested areas.

Postal records indicate that by 1798, an officer named Captain Kennedy was appointed as a competent postal authority. At this early stage, there were 160 postal deliverymen in active service. By 1815, the British had gained control of Ceylon and began to structure the Postal and Telecommunication service, realizing the value of the postal service for business and the welfare of the people. Mr. E. Bletterman was the first Post Master General of Ceylon.

A significant milestone was achieved in 1832 when Ceylon became the first country in Asia to have special mail carriages. These horse-drawn mail carriages connected various villages. With the advent of the first rail service from Colombo to Ambepussa in 1865, mail could be transported by train which improved delivery time.

By 1914, most mainline trains had a T.P.O. wagon – a travelling post office. Since then Sri Lanka Railways has successfully engaged in carrying parcels and letters across the island, linking railway stations and rural post offices. One of the first mail baskets painted in red, used for the ‘rail-mail’ service is kept on display at the Postal Head Office museum. The night mail trains remain a vital link in the postal spectrum.

Stamps are synonymous with letters. The world’s first postage stamp was created by Sir Roland Hill in May 1840. The stamp depicted an image of Queen Victoria. According to records, the first postage stamp in Ceylon was released on April 1, 1857. The use of stamps saw the use of the postal stampers – wooden stamping instruments, which ‘cancelled’ the new stamps. Wax seals were introduced for larger parcels and official mail.

The first stamp with the word ‘Sri Lanka’ was released in 1972.The year1857 was a year of advancement in terms of connectivity. For the first time, Ceylonese were able to send and receive telegrams. This was a welcome move. The first telegraphic lines were installed from Colombo to Galle and Colombo to Kandy. Young men and women were recruited and trained to learn the codes that were belted out on metal instruments, which in turn were encrypted.

Government notices were printed and sent for display on the bulletin boards at the Post Office. It was perhaps a forerunner to social media, in a community sense. The arrival of steam ships was also duly advertised. The steam ships docked at the Colombo Harbour, and delivered parcels and letters from London and the Netherlands.

Inside the postal museum, I saw an old poster dated 1929, which announced the visit of the steam ship RMS Osterley, which sailed to Melbourne, Sydney and New Zealand from Colombo. The local agents were Whittall & Co. Some of the mail delivery steamships that came to Colombo were from Peninsula & Orient, Rolando Lloyds, British-Indian Navigation and Organdies Line of Japan.

As the British administration realized the growing demand for letters and telegrams, they set up the GPO in 1895. At this stage, there were 50 post offices in Ceylon. Familiar in major cities are the bright red ‘pill boxes’ into which people dropped their letters. These sturdy cast iron boxes have stood for decades and can be spotted across the island, although new ones are also in use. These postal boxes were made in England by two companies – Mc Duvall Steven Ltd and W. T. Allen and Co. I have seen some of these beautiful postal relics in Kandy, Galle and Nuwara Eliya.

Another important postal advancement took place in 1914. The mail delivery service was extended to England via India. Dedicated postal staff would travel from Colombo to Mannar by train. The next phase was travelling from Talai Mannar to Danashkody (India) by connecting train. Letters were given to a collection centre which in turn dispatched them to London by flight. For the first time mail could be sent from Ceylon to London in seven days. December 1936 was a golden day for communication in Ceylon. The first airmail aircraft (a seaplane) of the Indo-Ceylon Flight Service touched down in Colombo, bearing the first airmail letter to one Mr. Ameresinghe of Dehiwela.

In the golden era of telecommunication, it was the Postal Service that introduced telephones to Ceylon. In 1938 undersea telegraph cables were successfully laid (direct lines) from Colombo to the Port of Aden, Seychelles and Penang (Malaysia). The early telephones were given to post offices, hospitals and police stations as a priority. People had to visit the local Post Office and request for a phone call. It was only in 1970 that mechanical auto phone exchanges enhanced our phone networks.

Today there are almost 640 main post offices in Sri Lanka. They sell nearly 300 million stamps annually. Around 400 staff sort our letters at the Central Mail Exchange (CME) in Colombo, working around the clock. Many would think we rely totally on email but postal services are still in demand. A visit to the CME shows how many letters are sorted and dispatched. Over the past few years, there is an increase in foreign parcels coming to the country as Sri Lankans have resorted to online shopping.

Remote islands such as Delft have a post office, where mail is delivered regularly by boat. Another good service is the payment of pensions to retired persons via the post office. During the long Covid-19 quarantine curfew postmen played a vital role in delivering medicine to patients, which is very commendable. Sri Lanka Post has come a long way over the past 200 years.