Stepping over the line in Jumbo territory 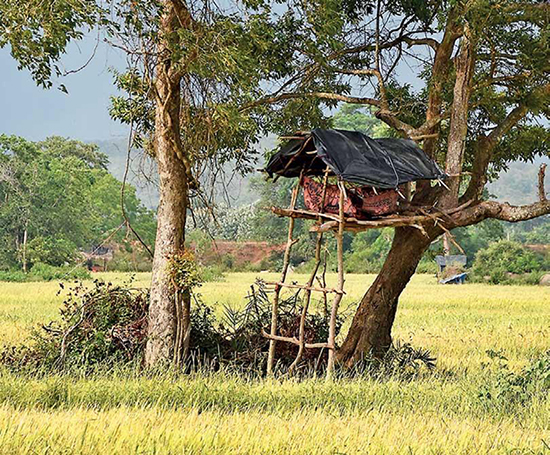 The Department of Wildlife Conservation (DWC) recently revealed that 189 elephants have died so far for this year due to the ongoing Human-Elephant Conflict (HEC). Horowpathana, situated deep in the heart of Anuradhapura District, is an area with a severely aggravating HEC. 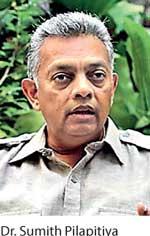 Punctuated with thick jungles, the area has a dense elephant population. However, people have started to encroach (mostly illegal) and have felled trees and burned them for chena cultivations thereby disrupting elephant territory. According to the Horowpathana Police, around five people have died just for this year due to the ongoing HEC. People in areas such as Rasnakawewa, Divulwewa and Dunuaththegama are severely affected by the issue.

While on the way to speak to people affected by the HEC, the Daily Mirror observed that there were no electric fences except for the presence of wire fences; that people can barely afford.

Most men have become victims to the issue and women therefore have to shift their roles as breadwinners. A. Wimalshantha has breathed his last after a fatal encounter with a wild elephant. We went in search of his house in Hasthipura. His widow Nilmini Renuka is now the sole breadwinner of the family and has to look after her three children. “My husband had gone to fetch a beehive on the day of this incident. His body was found three days later following a major search operation by the Army and Police. There have been elephants roaming around this area, but they were never a threat to humans. One had even eaten all our newly planted banana and coconut trees. Both of us used to do contract work, but now I can’t send my two daughters alone to school. My son is sitting for his Advanced Level Exam next year. So far we haven’t received any compensation either. Now I have to start working in the paddy field to earn money. Even the cost of living is high and we have no other way of income.” said Renuka.

When A. M. Ekanayake, a paddy farmer from Rasnakawewa, left to remove some shrubs growing in his field nobody would have thought that it would be his last journey. Today, A. Podimanike is widowed and is struggling to make ends meet. “My son has a congenital malformation from birth and I have to raise him. My two daughters are married and they live separately. But this happened at a very unexpected time. In several occasions I’ve been asked to give my son to a children’s home, but if it had been a healthy child nobody would have asked me to do so. So I decided to keep him with me. I receive the Samurdhi and my son receives Rs. 5,000 as well. But that isn’t enough to look after him. With elephants roaming around how can I go to the paddy field and spend the night in the tree house (pela)?” she questioned.

Similar stories were heard from all over the place and things are bound to worsen with no effective elephant conservation and management practices in place.

Problem is with the people

Refuting claims that elephants from the EHG are moving into the villages, DWC Director-General Chandana Sooriyabandara said that it is a misleading fact. “The EHG is protected from all sides with an electric fence and there’s no way that elephants could escape. The problem however is with the people because there are massive encroachment practices taking place and people are setting fire to forests for chena cultivations. As a result elephants have lost their habitats.” he said adding that if a person dies from HEC the family would be given Rs. 500,000 as compensation.  He also said that a decision was taken to translocate Rambo since he has become a problem elephant in the area. “But no such translocation was done”. Pics by Kushan Pathiraja 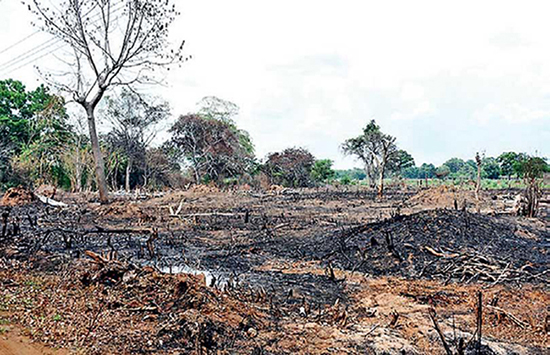 Nilmini Renuka (middle) widowed, unemployed yet the sole breadwinner of her household

Horowpathana also includes an Elephant Holding Ground (EHG) to cater to problem elephants and was established in 2015. Recently, speculation was rife that ‘Rambo’ an elephant from Uda Walawe National Park would be translocated to the Horowpathana EHG.According to the DWC this site is home to around 55 elephants brought from different parts of the country and 15 of them have died over the past 5-6 years. Sharing his concerns with the Daily Mirror, wildlife conservationist and former Director-General of DWC Dr. Sumith Pilapitiya spoke on why elephant holding grounds have been unsuccessful, why electric fences are the best available barriers and the importance of educating people.

QWhat was the objective of setting up the elephant holding ground in Horowpathana?

As I understand, the objective of establishing a holding ground is to translocate “problem elephants” away from the areas they are creating problems and keep them in the holding ground to prevent these elephants from creating further problems to humans. An Elephant Holding Ground (EHG) is detrimental to elephant conservation and management. However, the main purpose of establishing an EHG is to satisfy social/community and political pressure on DWC to do something to contain problem elephants. While I don’t agree with the objective of an EHG, I sympathise with DWC as it endures tremendous pressure from communities and politicians to remove problem elephants from local areas.

If an EHG is to be established, it must be based on scientific information. The EHG in Horowpathana is approximately 1,000 ha in size

QThere aren’t many electric fences in Horowpathana except in private lands. But even existing elephant fences in other parts of the country haven’t been successful. What are the alternatives ?

Electric fences are the best available barriers at present AS LONG AS THE FENCES ARE IN THE RIGHT LOCATION AND IT IS MAINTAINED WELL. The main reason for the failure of fences has been that it is in the wrong location and it is not maintained well. We must remember that electric fences are NOT for boundary demarcation but it is to keep humans and elephants separate. So fences should not be located on administrative boundaries such as between DWC and Forest Department land. Elephants travel based on the ecology so fences should be on the ecological boundary—the boundary that separates forest from developed areas. Basically, we should erect fences around what we are trying to protect. What are we trying to protect? People, housing and crops! Therefore, the electric fences should be erected around villages to protect people and houses and around crop lands. Dr. Pritiviraj Fernando and his team at the Centre for Conservation and Research (CCR) has undertaken community based permanent village and seasonal agricultural fences in the Kurunegala, Anuradhapura, Trincomalee and Hambantota Districts. These pilot projects are operating successfully. Delegations from India, Malaysia and Myanmar have visited these pilot projects and adopted the lessons learnt in human-elephant conflict mitigation in their countries. Representatives of 13 African countries visited these pilot sites in Sri Lanka in 2017 to learn from these experiences. Currently the Global Wildlife Programme of the World Bank is in the process of developing a guidebook based on these models to further disseminate the findings. It is sad to note that we in Sri Lanka are yet to learn from the experiences of these successful projects.

QAlready five people in this area have died this year due to HEC. What suggestions do you have to curb this issue in areas with a heavy elephant population?

From our experience of trying to limit elephants to confined areas—DWC protected areas and EHGs have not been successful even though we have been trying this for the last 60 years. Therefore, I think it is time to consider alternative approaches without trying different versions of the same failed solution. We have been trying to make elephants do what we want for all this time and failed. Don’t you think that if we understood elephants and their behaviour better and try to work around them, we may have a greater chance for success? We need to understand the elephants ranging patterns and erect fences accordingly. Electric fences should be erected on the ecological boundaries when there is adequate contiguous forests and erect community based village and seasonal agricultural fences to protect people, property and crops.

If communities are properly educated and made aware of elephants and their behaviour, coexistence with elephants will not be a problem. If you visit any “purana gama” or adivassi/veddah community, they would tell you that they have no conflict with elephants

QWe also observed large areas cleared and burned for chena cultivations. How successful have community based conservation approaches been with regard to executing coexistence with elephants?

In my opinion, if communities are properly educated and made aware of elephants and their behaviour, coexistence with elephants will not be a problem. If you visit any “purana gama” or adivassi/veddah community, they would tell you that they have no conflict with elephants. They know how to behave with elephants sharing their landscape and have been coexisting with elephants for centuries. Sri Lanka developed massive irrigation schemes since the 1950’s and relocated people from elsewhere to the command area of these irrigation schemes. HEC is noticeably prevalent within these communities who comprise a large population in the dry zone. These communities do not understand how to coexist with elephants. But this is easily addressed with education and awareness, which has not been done on any measurable scale.

I believe Sri Lanka faces a huge problem with deforestation. Uncontrolled clearing of forests have resulted in adverse environmental consequences. Unfortunately, this is done largely with political patronage and has been going on for the past couple of decades. Climate change is a main impact of deforestation. The first signs of climate change are more intense and severe weather events—such as more intense rainfall, floods and droughts. We in Sri Lanka are already feeling the impacts of climate change, based on the fact that we are already feeling the impacts of intense weather events.

So deforestation in Sri Lanka has to be stopped. We seem to be focused on increasing the land area for agricultural production. But what we should be doing is focusing on is improving the yield per acre which is quite low in Sri Lanka at present. The Government could achieve its objective of increased agricultural production through this approach. I feel this should be done first before expanding land areas for agriculture. This message should be conveyed strongly by our political leaders.

Electric fences should be erected on the ecological boundaries when there is adequate contiguous forests and erect community based village and seasonal agricultural fences to protect people, property and crops

QAround 189 elephants have died this year due to HEC. What kind of holistic approaches are needed to mitigate this issue, now that the environment is already under threat?