The turbulent sea below the rocky boulder on the sea shore

My destination is Gota Pabbatha Rajamaha Vihara, better known as the Godawaya temple, on a rocky boulder with a panoramic view overlooking the Indian Ocean. It is an ancient site on the coast, to the south of the Walawe Ganga estuary in the Hambantota district.

Whenever I visit Hambantota, I never miss the Godawaya temple where I spend at least half an hour enjoying the soothing atmosphere to my mind and body.

The ancient sea port of Godawaya lies about four kilometres from Ambalantota on the Galle Road, turning right at the Dehigahalanda school towards the seaside. It has a quiet little bay, which is a thriving fishing centre at present.

Several rocky boulders are scattered around, facing the boisterous bay on its west, while on the landside there are numerous stone ruins, including rock caves, stone pillars, a dagoba and the torso of a Buddha statue.

The recently restored colour-washed dagoba, lies on a rocky outcrop, which gives a majestic aura to the ancient site. Some stone ruins, including a stone carved statue of the Buddha, in the Godawaya temple, have been restored by the Department of Archaeology.

The rock inscription in the temple site states that the dues collected from the port were to be donated to the Godawaya temple.

The records also state that King Gamini Abaya donated the Customs duties of the port of Godawaya to the nearby Vihara at this site. Initially, the Godawaya temple was attributed to King GotaAbhaya of Ruhuna, in 3rd Century BC. History records that Godawaya came to be called Gota Pabbatha Rajamaha Vihara as a result of this association.

According to ancient chronicles, Godawaya had been on the Silk Route, where ships had anchored to take precious stones, spices and ivory, in exchange for clothing and porcelain.

The most picturesque site that adorns Godawaya is the estuary of the Walawe Ganga. Its mouth was sealed for all time by a mountainous sand dune of yesteryear. The strip of seashore flanked by the flowing Walawe Ganga is a fascinating spot, with its scenic deep blue sea, resembling a picturesque islet.

Walking along the white sandy sea shore of Godawaya bay, I found it adorned with numerous sea shells.

The sea is very turbulent around the rocky boulders and it is not advisable for visitors to enter the sea at the Godawaya bay.

According to the chronicles, Godawaya is referred to as Diyagananatota.

The Brahmi inscription on the rock at the temple premises, states that the old port of Godawaya is also called Godapavita. In ancient times, the Walawe basin was considered a prosperous rice producing area in Magama, and the Walawe Ganga was said to have been navigable for transportation. It is said that, in ancient times, the paddy harvest was transported by boats along the Walawe Ganga, which also had a ferry service, transporting paddy and spices to be shipped abroad from the ancient port of Godawaya.

He had lived in a small kuti (abode) built with cement blocks in the rock boulder facing the Indian Ocean on the shore at Godawaya, which portrayed a fascinating view of the sea. The ruined abode where the bhikkhu dwelt could still be seen at the rocky boulder of Gota Pabbatha Rajamaha Vihara premises.

In 1993, a group of archaeologists from the Department of Archaeology, in collaboration with the Bonn University of Germany, carried out an extensive excavation at the Gota Pabbatha Rajamaha Vihara, and found several ancient coins, which indicated that Godawaya was an ancient port along the Silk Route.

It points to significant trade between foreign countries, and also that the kings who ruled the country in ancient times, paid great veneration to Buddhism, paying Customs duties to the ancient Gota Pabbatha Rajamaha Vihara.

A visit to this remarkable place built by ancient kings whose monumental achievements are treasured centuries on, is a must, where one can enjoy the tranquility that prevails surrounded by an endless seascape. 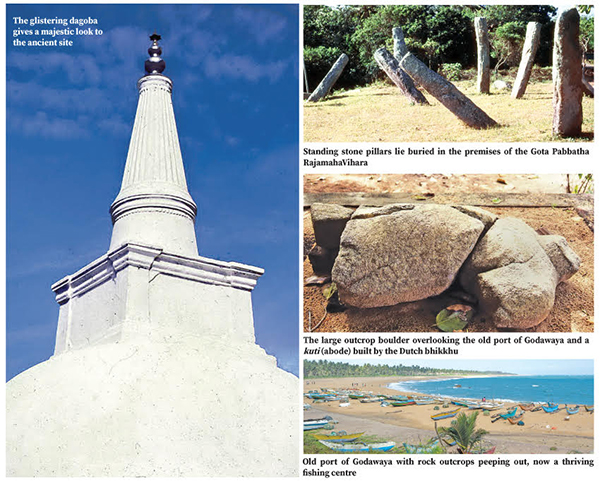