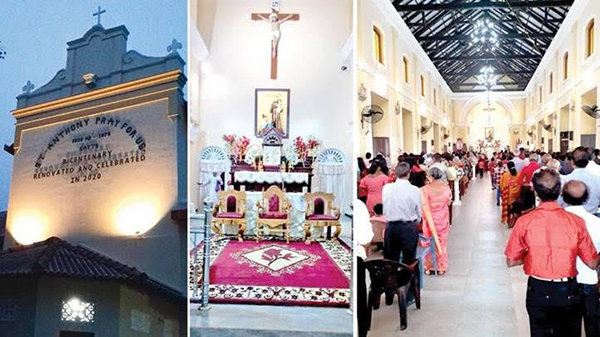 Tracing its origins to 1820, St. Anthony’s Church, Kayts is one of the oldest churches in the Jaffna Peninsula and commemorated its bicentennial in 2020. Sunday, August 16, was a red letter day for the community, whose ancestors hail from the parish. Having been damaged and abandoned during the hostilities in the North for many years, the church building underwent extensive renovations, thanks to the generous donations from community members in Colombo and other parts of the world. A grand celebration was planned for June 13, 2020 to coincide with St. Anthony’s feast, with the participation of community members from around the world. However, Covid-19 caused the festivities to be postponed for 2021. 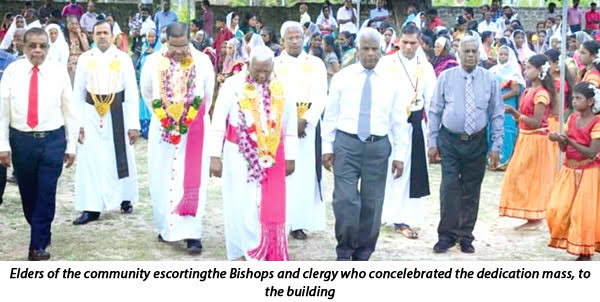 together for a grand ceremonial blessing and reopening of the renovated church on August 16 with Holy Mass concelebrated by Rt. Rev. Dr. Justin Gnanapragasam, the Bishop of Jaffna and Rt. Rev. Dr. Thomas Savundaranayagam, Emeritus Bishop of Jaffna, together with Rev. Fr. David Manuelpillai, Head of the Island Deanery, Kayts Parish Priest Rev. Fr. Mac Mayooran and several prominent members of the clergy.

It was attended by a large number of community members from Colombo and residents of Kayts, and the live television broadcast was viewed by parishoners around the world.

It is noteworthy that a little boy who was baptised at St. Anthony’s Church and who spent his formative years in the parish went on to become a Bishop. The only son of the late Mr. and Mrs. Varapragasam Emmanuel, Thomas Savundaranayagam entered the seminary in 1953, was ordained a priest by the late Bishop Emilanuspillai at St. Mary’s Cathedral Jaffna and celebrated his first mass at St. Anthony’s Church on December 23, 1963.

After serving in numerous parishes in the Jaffna and Mannar regions, followed by a tenure as the Diocesan Director of Catechetical Centre, Fr. Savundaranayagam was sent by the late Bishop Deogupillai to Rome where he pursued the religion and was awarded a Doctorate in Sacred Bibilical Theology from the Urban Pontifical University of St. Paul. While in Rome, he was appointed by Pope John Paul II in 1981 as the first Bishop of the newly created Diocese of Mannar. In 1992, upon the retirement of Bishop Deogupillai, he was installed as the seventh Bishop of Jaffna, a post he held until his retirement in 2015. During his 34 years of episcopal service Bishop Savundaranayagam, shepherded his flock with a steady hand during some of the most turbulent times in our recent history. In addition to Bishop Savundaranayagam, the Kayts East Community has also produced three other priests and two nuns. The late Rev. Fr. Victor Rajanayagam being the first priest from the community, was ordained in 1942. The others are Rev. Fr. Jude Angelo, Rev. Fr. Sylvester, Rev.Sr. Naomi Rajanayagam and Rev. Sr. Kamala Srinathan. 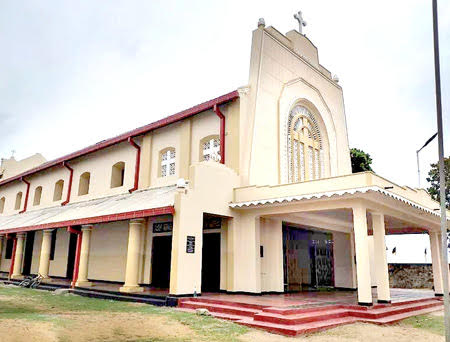 A reputed historian, the late Fr. Gnanapragasam, writes that initially, a church for St. Thomas was constructed at the present site of St. Anthony’s Church. During the time of the Dutch regime, Roman Catholicism was suppressed in Ceylon. Because of persecution by the Dutch, many statues held in churches were moved by devotees and hidden. After the departure of the Dutch, a statue of St. Anthony was found hidden in a tree trunk near the church by a wood cutter. The parish priest, when alerted, rushed to the spot and brought the statue in procession and placed it in the church.

Devotees began to venerate the statute of St. Anthony and soon, a number of miracles attributed to the power of St. Anthony were reported. As a result, St. Thomas Church was renamed St. Anthony’s Church. From ancient records of the church it appears that the people of Kayts East are the descendants of the martyrs of Mannar.

They are known to have initially settled in Chaddi in Kayts Island and were engaged in farming. They prospered and gradually moved to areas such as Naranthanai and Velanai. When the Kayts harbour began to gain prominence and sea trading began to develop, the people in this area were attracted towards the shipping industry. The years that followed saw many seasoned seafarers emerge from the community including master mariners, marine engineers and tug masters, many of whom went on to man senior jobs in the Colombo Port. Subsequent generations of the community have excelled in a variety of professions including medicine, engineering, law, accounting, banking, teaching, and have prospered as successful businessmen and entrepreneurs, made their mark in the shipping industry and are currently scattered around the world.